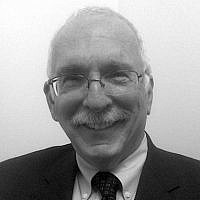 The Blogs
Bennett M. Epstein
Apply for a Blog
Please note that the posts on The Blogs are contributed by third parties. The opinions, facts and any media content in them are presented solely by the authors, and neither The Times of Israel nor its partners assume any responsibility for them. Please contact us in case of abuse. In case of abuse,
Report this post.

I hear you and Haim Saban want to fund ways to counter the BDS movement. Way to go! I’ve got one. It’s a bit of a gamble, but then again, how many millions did you lose on Newt Gingrich’s last presidential bid? Do this one right, and it will pay for itself.

Online shopping is huge, right? So instruct your lawyers to form a corporation called “Buy Dis’ Stuff”. That’s right. I checked, and nobody owns the name yet. Then have them walk – no, run –  to the US trademark office and register logos for the new company.  Make sure you design them all with big initial capital letters. B-D-S.  Aha! Do I have a Yiddishe kup or what?

OK, second step. Create some “Buy Dis’ Stuff” websites and get them up near the top on all the search engines. Make sure they fly the B-D-S logo (you own it now!).  Offer loss leaders and deep discounts on top selling European brands like Adidas, Nokia, and FIFA items, but make sure to feature Israeli goods, especially those from Judea and Samaria.  Love those Barkan wines!

Word will reach Bene Barak like lightning. Brooklyn might take until shacharis the next morning. In a few weeks, it will be around the world.  Everybody loves a bargain! Plus, think of all the free advertising your B-D-S will get from the movement. And the business! Now they’re not boycotting, Shelly, they’re hawking your brand! You’ll probably get a few million Google clicks a day just from the EU.  Your B-D-S will attract a ton of sales, even from British campuses.

Third step. Go all in. Forget that Saban, he’s a piker. Get the Koch brothers on board. Think market share. Think Amazon.com. Heck, think Alibaba! Sales of Israeli products will soar, and  companies or places thinking about boycotting Israel will think twice about which “BDS” they should follow, since you’ll be in a position to boycott them right back.

And it will cost you less than a Super PAC.

About the Author
Bennett M. Epstein is a criminal lawyer in New York
Comments