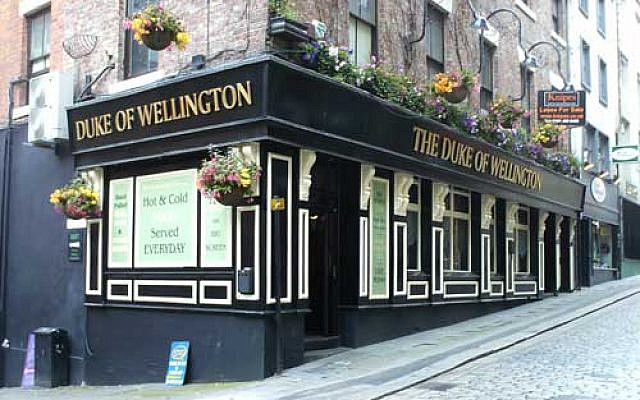 More Duke of Wellington pubs than you can shake a stick at (Photo Courtesy pubsandbeer.co.uk)

Long ago, Arthur Wellesley, the 1st Duke of Wellington, had the right idea – “I don’t know what effect these men will have on the enemy, but by God, they terrify me”.

Judging by the list of famous quotations attributed to the Duke, it is surprising that he had time to win any battles.

Today we have no shortage of things to terrify us. But, the time has come for the world to stand up to terror.

A large terrorist organisation, with many branches spread throughout the world, cannot be allowed to continue its activities. This organisation, innocuously named The European Union to hide its real purpose, has warned Serbia and Kosovo that they could undermine their hopes for EU membership if they go ahead with their plans to move their Israeli embassies to Jerusalem. Why Serbia and Kosovo would want to join this terrorist organisation was not clear.

This 27-nation organisation includes several countries with a long history of antisemitism, from centuries before the existence of the modern State of Israel.

In light of the EU’s demands, perhaps Israel should move its European embassies. Setting up embassies in Dortmund, the capital of the Germany or Marseille, the capital of France, might be a good start. This might help these countries understand that they cannot choose their capital cities, Israel will do it for them.

The French, still believing that anyone is interested in their opinion, have tried to interfere in the case of Salah Hamouri. Paris, or perhaps we should say, Marseille, has protested Israel’s deportation of the French-Palestinian terrorist Salah Hamouri. Hamouri, who is a French citizen, planned to assassinate the former chief rabbi Ovadia Yosef. Why the French are not clamouring for his return to his French homeland is not clear. Terrorist Hamouri would feel at home in Marseille, which has been ranked as the “most dangerous city in Europe“.

But we started this Blog with terror. The EU is not the only body to strike terror into our hearts. We are terrified that the British government will renege on the Balfour declaration. The Guardian, not a newspaper one would want to read, suggests that Britain should recognise “Palestine” to right the wrongs of the Balfour declaration. It talks about the theft of Palestine from the Palestinians, with no acknowledgement that we Jews were the Palestinians before Yasser Arafat invented the Arab Palestinians. The world has long forgotten what Golda Meir once said – “It was not as if there was a Palestinian people in Palestine and we came and threw them out and took their country away from them. They did not exist.”

We are terrified that our friend in the White House will fall victim to presidential candidate Joe Biden. Biden supports the Democrats’ desire to make aid given to Israel conditional on its actions. He seems unaware that America receives as much aid from Israel as it gives. Perhaps Israel should make its aid conditional on America’s actions.

Closer to home, Benjamin Netanyahu, as thousands of demonstrators trying to terrify him into resigning are taking to the streets around his house, would have been wise to heed the words of the the Duke of Wellington – “You must build your House of Parliament on the river: so that the populace cannot exact their demands by sitting down round you.”

With my finger hovering on the Submit button, I say, in the words of the Duke, Publish and be damned.