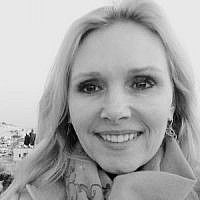 The Blogs
Angela Himsel
Apply for a Blog
Advertisement
Please note that the posts on The Blogs are contributed by third parties. The opinions, facts and any media content in them are presented solely by the authors, and neither The Times of Israel nor its partners assume any responsibility for them. Please contact us in case of abuse. In case of abuse,
Report this post.

For weeks, I’ve been going about the usual get-rid-of-leavening-and-remove-sticky-gunk-from-telephone Passover preparations. I tossed out dried apricots that had fossilized in my cabinet, pulled old tissues out of coat pockets and discovered (woo-hoo!) a few crumpled dollar bills, and made a lengthy grocery list ranging from boxes of matzah meal to more dried apricots to purchase for my Seder dinners.

At the same time as I was cleaning and contemplating cooking, Passover reminded me, and maybe incongruously, of an exhibit, “By the Rivers of Babylon” at the Bible Lands Museum in Jerusalem that I saw a few months ago. It’s true that I tend to brood intensely over times long distant and past, but in this case, the exhibit resonated in many ways with the diaspora Jewish world in which I live. 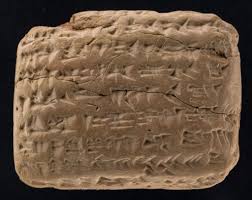 The catchy reggae song, “By the Rivers of Babylon” served as a backdrop to the exhibit. The music was so up-tempo and cheerful I almost forgot that it was based on the destruction of Jerusalem in 587 BCE and described the Judean exiles sitting by the rivers of Babylon (modern day Iraq), longing for Israel and the temple. The exhibit starkly depicted that destruction, from the large, deformed storage jar, warped by the intense heat during the Babylonian siege when Nebuchadnezzar’s army slaughtered 100,000 Jews to the medieval drawings of the prophet Jeremiah lamenting among the ruins of Jerusalem.

Somber, yes, but what really sent thrills shivering through me were the small, rectangular Al Yahudu cuneiform tablets dating from 572 to 477 BCE which my cousin Ranaanah said, “look like clay pierogis.” My proclivities are not toward food, and hers aren’t toward scribal activity of the first millennium BCE but there was a resemblance.

Written in a Babylonian town named “Al Yahudu” (City of Judah), where the exiles were resettled, the earliest tablet dated from just 15 years after the exile. There was Samak Yama who quite probably had been one of those forcibly marched from Judea to Babylon by Nebuchadnezzar’s troops. Four generations of his family were attested to in the tablets, which, alas, did not contain any ancient, juicy secrets. The promissory notes for dates and barley would make few people quake with excitement, except for Assyriologists and people like me who would pick cuneiform over Passover cooking and cleaning any day. But here’s what the Al-Yahudu archive made clear: these Jews owned property, were fully integrated with their neighbors and learned to live in a multi-lingual context, even while retaining their Hebrew names and identity.

You’d think that when these exiles were allowed to return to their land of origin 90 years later, there would be a mass exodus, the likes of the one from Egypt but this time from Babylon back to Israel! True, many Jews did return and helped rebuild what would become the second temple. But many others remained in Iraq but not as slaves of the state as they had been in Egypt over half a millennium before, but as self-imposed exiles for over 2,500 years.

They had arrived unwillingly, courtesy of Nebuchadnezzar, who rebuilt Babylon and is credited with the hanging gardens of Babylon, one of the seven wonders of the world. Remaining willingly, their descendants spread out across the Middle East, settling in Egypt, Iran, Yemen, Tunisia Syria and elsewhere.

On the whole they were treated better by their Muslim cousins as guests of the state than their European Jewish brothers and sisters, who were expelled from England, endured the Spanish Inquisition, and faced a host of pogroms, anti-Semitic violence and intolerance that culminated in the Holocaust.

With the creation of the state of Israel in 1948, diaspora Jews were no longer safe in Iraq, nor in the rest of the Arab world, and altogether in the past century close to a million Jews fled the Arab countries they’d called home for a very, very long time.

Since 1950, 121,000 Iraqi Jews immigrated, many to Israel They locked their homes and said goodbye to the place where they’d picnicked in the ruins of ancient Babylon, and gone on pilgrimages to Ezekiel’s tomb. A fellow exile, Ezekiel had authored his prophetic book in Iraq: “And I came to the exile community that dwelt in Tel-Aviv by the Chebar canal.”

In 1967, Saddam Hussein hung 17 Jews in a Baghdad square, for allegedly “spying” for Israel, despite no evidence to prove this claim. In the 1980s, Hussein, who fancied himself the reincarnation of Nebuchadnezzar and had his image set next to Nebuchadnezzar’s in a commemorative medal, decided to rebuild Nebuchadnezzar’s palace atop the ancient ruins, placing his inscribed bricks above those of Nebuchadnezzar’s.

When I visited Israel, I also went to the Temple Mount in Jerusalem that overlooks the Old City and the Western Wall. The Dome of the Rock glints gold and majestic on the Temple Mount. It was built by Muslims in 691 CE as a shrine to preserve the sanctity of the space where both the first temple built by King Solomon and destroyed by Nebuchadnezzar in 587 BCE, and the second temple, rebuilt by the Babylonian exiles in 516 BCE then destroyed in 70 CE by the Romans, once resided.

Inside the Dome is a huge limestone rock, much like the limestone that bathes the entire city in its magical white-rose aura. Muslims believe Mohammed took his Night Journey from the site of the former Jewish temples. Jewish tradition says this rock is the one that Abraham laid Isaac upon when called by God to sacrifice him. The Ark of the Covenant containing the Ten Commandments, which were handed down after the Israelites’ flight from Egypt, rested upon the rock when the first Temple still stood, before the Babylonian destruction.

The Temple was the spiritual heartbeat of Israel, it was God’s home on earth, and it housed not only the Ten Commandments that they had received as a people on Mt. Sinai, but very possibly other documents that told the story of the Israelite people. When the temple was destroyed, where was God dwelling? Was God, too, in exile? That was the dilemma the exiled people in Babylon faced. How could they sing the Lord’s song in a strange land, by the rivers of Babylon, the Psalmist asked? Without a temple?

Which brings me back to Passover and my mental reverie on exile and return, entrances and exits, personal and national, spiritual and physical. It’s commanded in the Bible to “tell your son” the story. Like we do every year, we will sit around the table and read through the Haggadah (“telling” in Hebrew), the text that recounts the miraculous liberation of the children of Israel and which also gives the order (“seder”) of the ritualistic meal, from the blessing over the green vegetable that represents hope and renewal, to dipping one’s finger into the wine and placing a drop onto a plate for each of the ten plagues.

The Haggadah that’s in use today was probably compiled in Babylon in the 7th or 8th century CE. If the Exodus marks the birth of the Jewish nation, and ultimately the kingdom of Israel, then the Babylonian exile represents the reverse: the birth of a Jewish people in the Diaspora. From this Babylonian diaspora community, we discovered that stories, words, texts and prayers can be carried across borders, and serve as a portable temple, a spiritual home, and they can reside in the hearts of anyone who hears them. And that is how it was, and still is, possible to sing the Lord’s song in a strange land, by the rivers of today’s many diaspora “Babylons.”

About the Author
Angela Himsel is a freelance writer who lives in New York City.
Comments