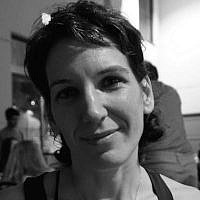 The Blogs
Aviva Angel
Apply for a Blog
Advertisement
Please note that the posts on The Blogs are contributed by third parties. The opinions, facts and any media content in them are presented solely by the authors, and neither The Times of Israel nor its partners assume any responsibility for them. Please contact us in case of abuse. In case of abuse,
Report this post.

SAN DIEGO — The myth of the “melting pot” has shaped public education over decades. It was the prevailing theory as early as last century, and it shaped educational policy at a time when outward racism and bigotry was accepted and touted amongst American politicians and elite. The idea behind melting pot theory was to strip foreigners and immigrants of their culture and tradition with the ultimate goal of forming a standardized, uniform notion of being, known as the American.

By the 1970s and 1980s, the myth was debunked in academic circles. Having a rich cultural identity and a sense of community, belonging, and rootedness is now understood to be crucial to children’s wellbeing and their ability to perform well in school and social settings. There are myriad studies that tie academic performance, social mobility, empathy, and economic mobility to children who are raised with a strong connection to community, rootedness, and tradition.

Numerous research studies have found that strong ties to cultures of origin, multilingualism, and multicultural identities provide cognitive, academic, social, and emotional advantages. Over the past decade, we have witnessed climbing rates of depression and suicide amongst publicly educated students. “Unfortunately, when we create an environment that leads children to feel ashamed of their ethnic identity, or to think that they cannot be both ethically identified and American, we are robbing them of a crucial protective factor that enhances their development,” writes Kalina Brabeck, Professor of Counseling at Rhode Island College.

Past education policies have failed to provide students a sense of community and rootedness. In 2018, the National Institutes of Health (NIH) published a study which found, “Youth who feel connected to people and institutions in their communities may be buffered from other risk factors in their lives. As a result, increasing connectedness has been recommended as a prevention strategy.” Children need to feel connected to their families and communities. It is imperative that education policy recognizes that the most beautiful aspect of America is its diversity. Children need to be given the ability to gain a strong sense of community by having the opportunity to be raised in the traditions and heritage that is important to their families.

The good news is that changes are afoot in many states across the country. In June of 2020, the Supreme Court passed a landmark decision in Espinoza versus Montana. Essentially, the Supreme Court ruled that voucher money given to parents for their children’s education could be used for religious schools, should the parents elect to do so. With rising frustrations over the pandemic and the June 2020 Supreme Court decision regarding school choice (vouchers), more and more states are adopting laws that allow parents to use public funds to send their kids to a private or public school of their choice. Currently, there are a growing number of states that provide school vouchers including, Florida, Indiana, North Carolina, and Maine, to name a few. The benefit of giving parents the ability to choose a private school that is aligned with their values, traditions, or culture is increasingly being recognized throughout the country.

Support for school vouchers is mounting. In repeated polling, and after decades of dealing with failing public schools, Black, and Hispanic voters show overwhelming support for school choice, with a 73 percent approval rating among Black voters and a 69 percent approval rating among Hispanic voters. Black and Hispanic parents are frustrated with years of struggle that stem from having been handed an inferior education. These communities want the opportunity to choose their own children’s educational environment. In a long-term study, following minority students that received vouchers, the Harvard Kennedy School demonstrated that grade school vouchers ultimately helped ensure low-income minority students to earn a college degree.

Perhaps the most surprising result of recent polling is that Democrats are in favor of school choice by a majority of 70 percent. The reasoning behind this substantial shift seems to lie somewhere between the way that the public schools handled the pandemic but also in frustrations with failing schools and spending habits of education boards and administrations throughout California (and the country). Examples of excessive spending can be viewed on https://transparentcalifornia.com, with annual compensations for the San Diego unified superintendent of $365,000 and a whopping $439,800 for the superintendent of the San Diego Board of Education. In some districts, there is a baffling inverse relationship — superintendent and administrative salaries rise while those exact school districts’ performance declines.

Yet perhaps the strongest statement promoting School Choice comes from The National Academy of Medicine: “Children’s development of cognitive, affective, and behavioral capacities is best promoted when the contexts that surround them are strong and healthy. Children are embedded in families, who are, in turn, embedded in communities. Policies or programs that strengthen families and communities by addressing the social determinants of health also promote children’s healthy development, and ultimately national prosperity.”

California School Choice (https://www.californiaschoolchoice.org/) is working to make this happen for California kids. The Educational Freedom Act Initiative — which will provide $14,000 per child, per year, for parents to determine the private, religious or public school they would like their child to attend — is still working its way through the Secretary of State, with a deadline of October 12 to release the initiative for the collection of signatures. The aim is to have school choice (vouchers) on the ballot for November 2022.

Although polling shows overwhelming support for school choice, the path to getting there isn’t going to be a paved road. Superintendents and public-school administrators who benefit from a system that provides individual compensations upwards of $300,000 are going to want to protect their livelihood at the expense of what is best for our kids. They are expected to do their utmost to rile up the unions against this measure even though evidence shows that giving parents a choice is better for our children.

California School Choice will need to print and distribute copies for signature after October 16. The launch date will be Sunday, October 31. The initiative is not going to be computer-printable, there are going to be print copies available for volunteers to collect signatures prior to that date. Those interested in obtaining signatures from parents, grandparents, friends, or fellow congregants can join California School Choice here and/or complete a volunteer form here.

Being part of a private school allows parents to have a sense of community and a sense of partnership in raising their own children in their chosen culture and philosophy. It provides an opportunity for children to feel rooted in their communities and their families. It’s time to get involved.

About the Author
Aviva Angel is a corporate executive and a transplant from New York City to San Diego. She is the founder of Urban Kibbutz, a Jewish Intentional community in San Diego, and a Board Member of Ohr Shalom Synagogue. Aviva brings her passion for social good, the community, and Jewish life to her work. Aviva holds a BA from Binghamton University and is an MBA student at the Kelley School of Business, Indiana University.
Comments