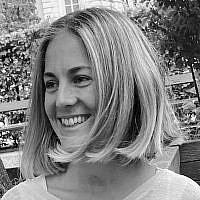 The Blogs
Julia Hack
Apply for a Blog
Advertisement
Please note that the posts on The Blogs are contributed by third parties. The opinions, facts and any media content in them are presented solely by the authors, and neither The Times of Israel nor its partners assume any responsibility for them. Please contact us in case of abuse. In case of abuse,
Report this post.

Since my arrival in Lod three months ago, I’ve experienced the reality of crime and violence, involving the rising use of firearms, as a parallel reality

I learned how to differentiate gunshots from fireworks, and how to stay decisively uninvolved from the shady things happening in the streets of Lod.  This is not the nationalistically driven violence that was witnessed in May last year, but almost exclusively concerns Arab society.

The last year 126 Arab Israelis were murdered. The media frequently reports about killings associated with internal feuds between Arab crime families: Just in mid December, a bus driver was shot dead on his way to work in Lod. The new year began with Lod resident Hussein Issawi being shot on January 06.

Illegal gun use is rising within Arab society, as does their sense of insecurity: The Abraham Initiative’s 2020 Survey on Personal Security of Arab Society in Mixed Cities revealed that the percentage of Arab residents of mixed cities experiencing a sense of lack of personal security (60.8%) is much larger than that of Jewish residents (27.5%), and that 83.8% of Arabs in the mixed cities are specifically worried about  gunfire and use of firearms. The reaction to these developments from Jewish society is a rising demand for legal gun possession.

Approaches for providing safety and protection of Israel’s citizens clashed in the Knesset on December 13, 2021. In this discussion, MK Itamar Ben Gvir (Otzma Yehudit) and other Knesset members of the center and right promoted easier access to gun licenses for the Jewish population as the best approach for self-defense. Amnon Be’eri-Sulitzeanu, co-CEO of the Abraham Initiatives, presented a significant argument within the debate about civilian gun possession and civil security.

He drew  attention to the fact that arming civilians removes the responsibility of protection from those authorized to carry it out-the police. As a counter approach to the proliferation of firearms among  civilians, he proposed the distribution of police in contact points where Jewish-Arab flare-ups occur as  a way to  neutralize these points of friction.

The government is starting to take the right steps to address this crime. In November 2021 the government allocated 2.4 billion shekels as part of a national five-year plan to combat crime and violence in Arab society. However, It is clear that proliferating legal gun possession among Jewish residents doesn’t serve the five-year plan’s purpose to ensure the safety and security of Israel’s citizens.

About the Author
Julia graduated from the University of Vienna, Austria in 2021, where she studied Science of Education. She immersed into Israeli culture through volunteering in a variety of places. The last year she spent on qualitative research regarding educational transitions of Israeli youth between High School and professional career. Currently she volunteers in schools and the community theatre in Lod and interns at the Abraham Initiatives
Related Topics
Related Posts
Comments