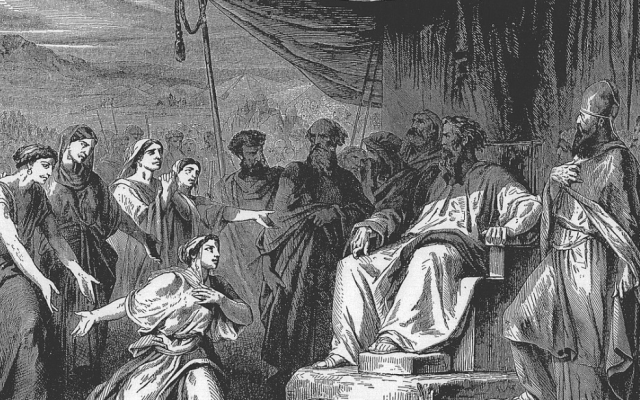 The Zelophehad Women at Court. (Image is public domain from Wikimedia)

As they approached the Promised Land, explicit instructions were given about how to divide it up: “Among these the land shall be divided for inheritance according to the number of names,” Moses was told by HaShem, “According to the names of the tribes of their fathers they shall inherit.” The list of names of “the tribes of their fathers” only included those who could themselves become fathers, that is to say, men. At the time, women were not people, but property; it makes no sense to give property to property.

Zelophehad was one of the Jews freed from bondage in Egypt, but died before reaching Israel. He had no sons, only five daughters: Mahlah, Noa, Hoglah, Micah, and Tirzah. The letter of the law was clear. The land was not to be given to or inherited by women.

They sought redress for this injustice. “They stood before Moses, Eleazar the high priest, the chieftains, and the whole assembly, at the entrance of the Tent of Meeting.” They protested, demanding change in the law. Moses took the question out of the Tent where the court sat and brought it before the Lord, the maker of laws.

There are two wonderful lessons we learn from this. First, that we are partners with Hashem in building our ethical world. But more striking is the second, that the laws are not immutable and that we may protest our partner’s decisions when seemingly unfair. “The plea of Zelophehad’s daughters is just,” Hashem said to Moses, “transfer their father’s share to them.” Here, at this moment of distributive justice, women were deemed human, more than property.

The voices of The Zelophehad women were echoed three thousand years later by Lilly Ledbetter in Gadsden, Alabama at a Goodyear Tire plant. Ledbetter worked there from 1979 to 1998. A good employee, she worked as long, as hard, and as well as men in the same job, but she was paid less for the same work. As raises were given, hers was always smaller because she was a woman. Like the Zelophehad women, she took her complaint to court. A jury found that she was harmed by malicious discrimination, and awarded her backpay and damages amounting to millions of dollars. The case was then appealed to the Supreme Court of the United States.

The highest court contended that the letter of the law did not support her. The majority ruled against Ledbetter’s claim of discrimination contending that there is a time limit on such complaints that starts the moment the disparity starts. Despite the fact that the discrimination continued for nine years and that she only found out about it years later when retiring, because she filed when she did, she was not entitled to the compensation she would have gotten if she were a man.

Perhaps writing with Zelophehad like ink, Jewish U.S. Supreme Court Justice Ruth Bader Ginsberg argued in a dissenting opinion that, just like the case of the Zelophehad women, the deprivation of what Ledbetter deserved on the basis of sex was deeply unjust. “[A]n employer gains from sex-based pay disparities in a way it does not from a discriminatory denial of promotion, hiring, or transfer. When a male employee is selected over a female for a higher level position, someone still gets the promotion and is paid a higher salary; the employer is not enriched. But when a woman is paid less than a similarly situated man, the employer reduces its costs each time the pay differential is implemented.” Goodyear was profiting from the discrimination against Ledbetter in a fashion that reminds us of the Zelophehad women. To protest the immorality of Goodyear and the injustice of the High Court’s decision, Ginsberg took the rare step of reading her entire dissent from the bench.

Justice for Zelophehad’s daughters required Moses approaching the Lord, and seeing the unfairness, the Maker of Laws changed the law. The same thing happened in the case of Lilly Ledbetter. Ginsberg’s dissent had no effect on the ruling of the Court, but it did launch a movement to change the law. In this case, the maker of laws was the Congress of the United States. In 2009, less than two years after the Supreme Court’s decision, they passed the Lilly Ledbetter Fair Pay Act.

When Justice Ginsberg passed away in 2020, Ledbetter said of Ginsberg that “she changed my life and changed the country,” remarking that Ginsberg’s strong stand for justice, “gave me the dignity to go on.” The women of Zelophehad knew what the law was and knew it treated them unfairly. They thus sent Moses to God to ask the Lord to change the law, to help them and us build a better way. Echoing her ancestors, Ruth Bader Ginsberg did for the women of today what the women of Zelophehad did for women three thousand years ago. RBG demanded that we stop treating women like property.

Franz Rosenzweig taught: as scripture writes, we are children, as scripture reads, we are builders. RBG built like the best of them, e.g., the women of Zelophehad. May the memories of the Zelophehad women – Mahlah, Noa, Hoglah, Milcah, Tirzah — and Ruth Bader Ginsburg — always be for a blessing.

Co-written with Professor Steve Gimbel, Professor of Philosophy at Gettysburg College and co-author of “Reclaiming The Wicked Son.”