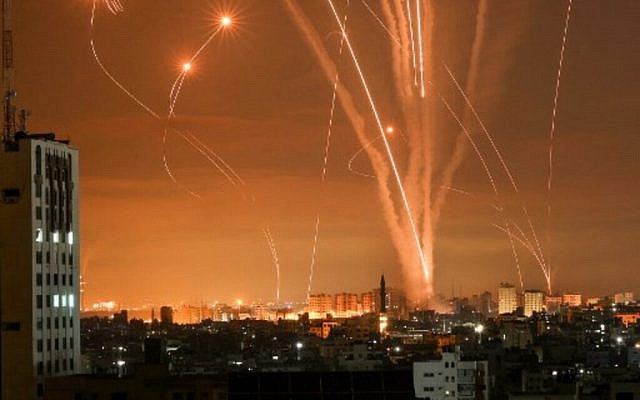 For most of the past two weeks, Israelis – including close members of my family – scrambled to their nearest bomb shelters to take cover from the onslaught of rockets from Gaza. The rockets have, thankfully, stopped – for now.

Last week’s attacks are no different from Hamas’s tried-and-true tactics: incite violence and launch missiles into Israeli territory, trigger an Israeli defense and security response, and then wait for the predictable chorus of outrage against Israel’s defensive actions. While Israel’s detractors seized the moment to call for halting US assistance, a move that will surely embolden terrorist groups beyond Hamas, it was encouraging to see the majority of leaders in Congress stand up for Israel’s right to defend itself. To fight global terrorism, we must continue our commitment to standing with our democratic ally, Israel.

The more than 4,000 rockets fired indiscriminately by the Iranian-backed terror organization Hamas caused immense physical and psychological damage to Israelis, both Jews and Arabs, and to Palestinians. Anti-Israel activists would have you believe that these latest attacks – the heaviest offensive between Israel and Hamas since the 2014 war in Gaza – were the result of a legal dispute in the Jerusalem neighborhood of Sheikh Jarrah, or even Israeli reactions to rioting in and around the Old City. They are wrong. This is about Iran-backed Hamas seeing a chance to control the narrative, to weaken Israel, and to increase its own influence among Palestinians.

As Hamas sought to injure or kill as many people as possible, on both sides, Israel had not only the right but the duty to defend itself and its citizens. Any country would. There is no moral equivalence between self-defense and offensive terrorist attacks. While the loss of innocent Palestinian lives, including the children Hamas put in harm’s way is tragic, the professional restraint and military precision Israel demonstrated should be praised. Israel focused its attacks on sites used by Hamas for military purposes and provided warning to civilians to evacuate those locations prior to attacks. Even though Hamas chooses to operate from civilian buildings and densely populated areas, Israel worked to minimize civilian casualties.

As expected, anti-Israel voices seized the moment to vilify Israel. Sadly, a small but vocal chorus in Congress, including Representatives Ilhan Omar, Rashida Tlaib, Alexandra Ocasio-Cortez, and Senator Bernie Sanders joined in these efforts to blame and demonize Israel, undermining its right to defend its citizens from attack. By providing cover for Hamas’s terroristic actions, their comments fueled the fire and had the effect of encouraging Hamas to continue its attacks and shameless endangerment of Palestinian lives.

These same members of Congress also used the conflict to advance their agenda of restricting aid to Israel and to call for halting US military assistance while Israel was under violent attack. These are dangerous policies that would only embolden Israel’s enemies like Iran and Hezbollah while not helping Palestinians in the least bit.

In her effort to blame Israel, for example, Congresswoman Omar falsely denied that Hamas uses human shields, saying it was “a myth.” Firing rockets from crowded areas near schools, hospitals and homes is not a myth. Using apartment buildings as weapons depots or command centers is not a myth. These are despicable tactics that Hamas and other terrorist organizations have long employed – tactics that the United Nations has condemned Hamas for using.

It is astounding that these members of Congress, who brand themselves progressives and defenders of human rights, turn a blind eye to Hamas’s horrifically unprogressive behavior. Hamas does not support a two-state solution – it calls for the destruction of Israel and a war against Jews globally. That should be enough to send any progressive running. But Hamas does not stop there; it abuses its own people as well. Hamas solidified its power in Gaza by murdering its Palestinian political opponents, it represses members of the LGBTQ+ community, denies religious and political freedom to Palestinians and is aligned with like-minded leaders in Iran, which makes the destruction of Israel one of its primary foreign policy goals.

Even more stunning, self-proclaimed “pro-Israel” group J Street is using this moment to support dangerous proposals to restrict US aid to Israel that would undermine the foundations of our strategic relationship and commitment to Israel’s security – a commitment these events prove is necessary.

Fortunately, the Administration and the vast majority of members of Congress from both sides of the aisle continue to stand in solidarity with Israel and have strongly condemned the terrorist attacks. The US State Department reiterated Israel’s right to defend itself and stated that the rocket attacks from Hamas were an “unacceptable escalation.” Some 350 senators and representatives – both Republicans and Democrats – have provided moral clarity on this conflict by publicly expressing their support for Israel’s right to defend itself.

US assistance helped fund Israel’s critical Iron Dome missile defense system, which has protected countless civilians from these rocket attacks and continues to literally save thousands of Israeli and Palestinian lives. Could you even imagine the death toll from these attacks if Israel did not have the Iron Dome?

In the face of terrorist attacks, calls to cut aid, add unnecessary conditions and stop emergency assistance are irresponsible and dangerous. Countries like Iran and their proxies in the region continue to seek Israel’s destruction. Iran encouraged Hamas and watched closely to see how Israel’s defenses worked and whether Israel was able to fire back. Hezbollah has far more rockets and missiles than Hamas, with greater firepower and accuracy. When they see Israel verbally assaulted when it tries to defend itself, they are encouraged. When they hear members of Congress seek to limit security assistance and cooperation with Israel, they are emboldened.

We must continue to condemn in the strongest terms the recent attacks on Israel from Hamas terrorists, and we must do everything in our power to continue to support the enduring safety and security of our ally Israel.