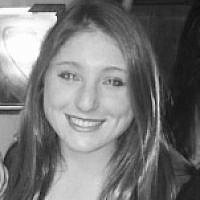 I turned down the street by accident, if you can call it that—after all, roaming is intentional. The sunlight glinted and I squinted, you might say I opened my eyes at the right time; there I saw it. Five words, lipstick tinted ink, a small heart scrawled and its shadow, its ghostlike image carved as if with a scalpel centimeters above, flakes of the wall in dust:

I wasn’t sure what “Mesarvim” meant so I followed the man who had just passed me a few steps up the road—“Slicha,” “Excuse me,” I called out as he pulled open a garage door scrawled with more graffiti. I asked him the meaning of “Mesarvim.” He turned his back to the antique rugs and furniture on the sidewalk, smiled crookedly and chalked up, “they won’t allow it.”

The barista at Aroma down the street, more accustomed to speaking English, provided a more succinct definition: “refuse,” the word that had evaded me. Basking in the shade Bus 125 brought with it as it shielded the sun, I fumbled for my Rav Kav to swipe for my ride back to Bat Yam, and it all made sense.

“Jews and Arabs refuse to be enemies.” 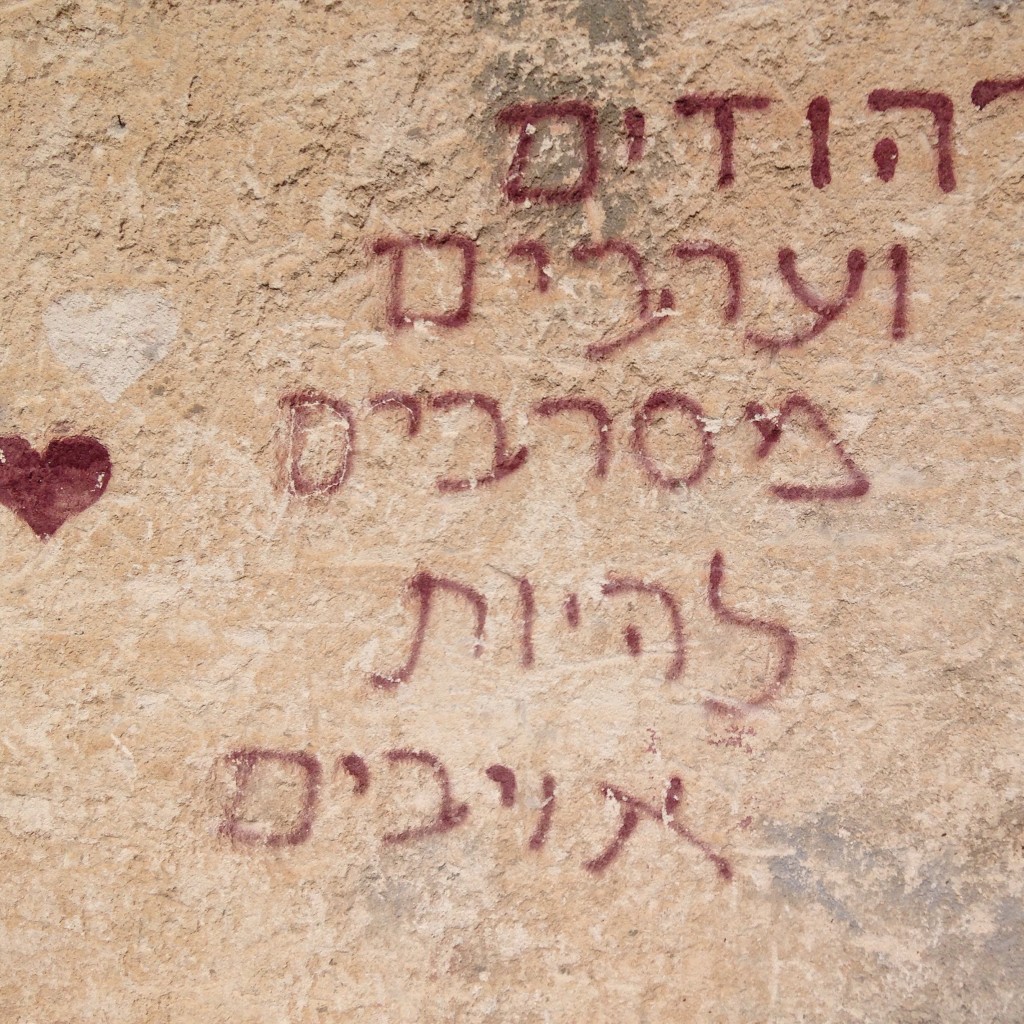 It was written plainly, beseechingly, commandingly on the glistening sandy spackled wall in Old Jaffa. I didn’t know by whose hand it was crafted, just as I didn’t know whether the antique seller was Jewish or Arab (or a Jewish Arab or a Christian Arab or a Jewish or Muslim Israeli, etc…).

But I did know that I had wanted the mysterious word to mean refuse just as I considered that peace was a decision, i.e. if we decide to treat each other right, perhaps we will. We can refuse to be friends, or we can refuse to be enemies. It shouldn’t take creativity to figure that out.

But in some places, it does. In some places, when the norm is hostility, it takes a brave soul to play hostess—hostess to new ideas, customs, people. Hostess to vulnerability.

For too long the sun has been in our eyes.

French street artists JR and Marco dropped the shield when they blew up photographs of Israelis and Palestinians and pasted them on both sides of the security fence. They squinted through the sunlight when Israelis and Palestinians interviewed couldn’t tell the difference between images—which photograph depicted the Israeli cab driver, and which the Palestinian cab driver, both making distinctly funny faces, both tan, bearded, mid-50’s?

Israeli theatre director Hana Vazana Grunwald dropped the shield when she began cooking lessons and a friendship with a Muslim woman in East Jerusalem and staged a play about it, inviting the audience to taste the dishes and the memories on display in both the woman’s home and the Jaffa Theatre.

The David Project dropped the shield when they took over 100 students, myself included, to Israel over winter break—Jewish, Christian, Muslim, Hindu, from over 30 American universities—and asked us to see Israel for ourselves, Jewish settlements and Palestinian villages, as close as we could get to the Dome of the Rock and the top of Masada, as close as we could get to each other, and asked us to take these perspectives back to campus. An alumnus of the trip understood what he needed to do when he arrived back on campus in Philadelphia and exhibited photos from his trip on the sidewalk. 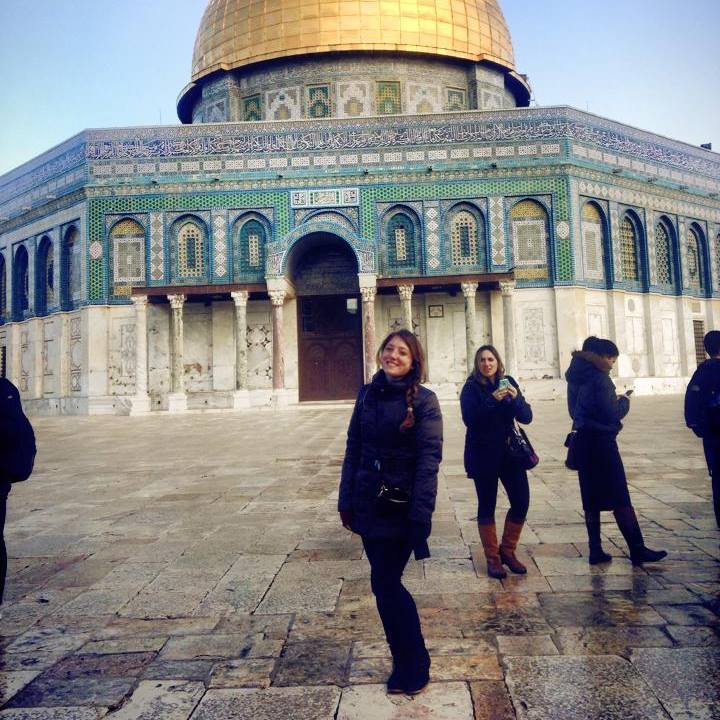 Students at NYU from various social and religious circles joined me in dropping the shield when they took the stage at the Bronfman Center, our school Hillel, and performed stories, monologues, poetry and songs about their faith, whatever it meant to them, in an evening dubbed The F Word. They were playful and honest, creative and heartfelt, and that’s all it takes. 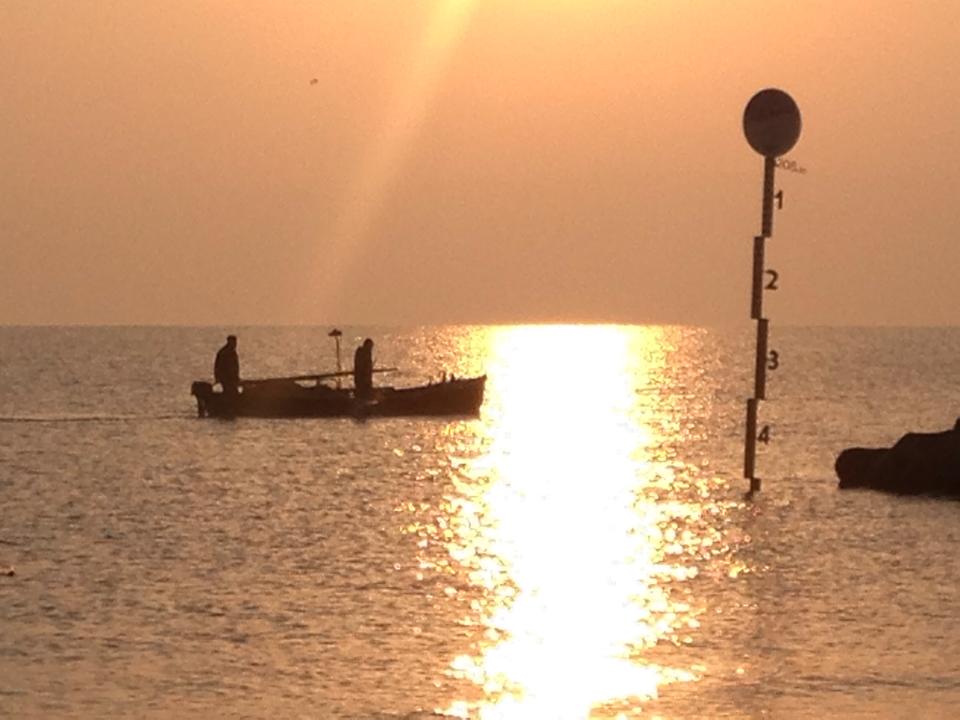 Greet the morning with awe. Sea of Galilee.

The road to enlightenment begins now. Or rather, it continues, with us, with creative intent.

For without us—those whom have seen Israel firsthand—there are no stories, and without stories—there is no humanity. And with no humanity, well, there is no campus conversation, or any type of conversation; not really.

I know of Israel’s humanity.

I know how moved I felt hearing beloved Israeli director Eran Riklis speak of his inspiration behind the film, The Human Resources Manager, when I had the privilege of hosting him and screening his film at NYU. He was motivated to work on this film, like all of his films, because it was a human story.

“There’s a lot of creative energy in Israel, I think, because there are stories all around us,” he told us that night.

Israel can speak for herself.

If you go there, you see, and you know, but you never see and know everything. Her complexities are in the air you breathe, somehow simplified by its freshness.

But Israel is not here—we are. Hana Vazana Grunwald and Eran Riklis are not here—but their stories can be.

We are the conduits through which Israel’s rivers flow beyond her borders. If art, photographs can heal wounds between Israelis and Palestinians, certainly our own narratives can invite others in.

If we do not step into the light, talk to those whose eyes are shielded, understand them so that they can understand us, then we are leaving Israel in darkness.

I suggest a path, not a way.