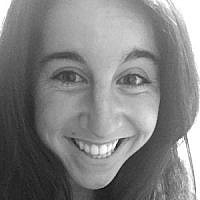 The Blogs
Tamar Grazi
Apply for a Blog
Advertisement
Please note that the posts on The Blogs are contributed by third parties. The opinions, facts and any media content in them are presented solely by the authors, and neither The Times of Israel nor its partners assume any responsibility for them. Please contact us in case of abuse. In case of abuse,
Report this post.

As an NYU student who has fallen in love with Israel, I find myself preferring to hide my affection, rather than display it for the world to disapprove.

Last semester, I wrote a research paper about the Ethiopian immigration to Israel, and I was tremendously excited about it. That is, until my professor mentioned that each student would present her paper before the class. In came the nerves, and the deep regret for not choosing any other place in the world to write about.

My paper was not even political. And nobody in my class had ever said anything hostile about Israel. In fact, the topic rarely came up, aside from a few casual references to Palestine. Mostly, I had no idea where the opinions of my classmates lay.

And consequently I assumed that everyone was anti-Israel. Because, college campus. Because, NYU.

I’ve always been told that the world disagrees with me, that the pro-Israel kids never win the argument. And I’m not an arguer. So when it comes to a topic so sensitive, I choose silence. The subject of Israel is too personal, too close to my heart, to put it out there, into the vulnerability of college debate.

For fear of being attacked, I keep Israel as my own secret treasure.

And in the end, my anxieties were baseless. Nobody screamed insults at me, or set the room on fire during my presentation. But the experience made me realize how much my fear of confrontation silences me, how it makes me so overbearingly protective of my beloved country.

And I wonder if maybe it really does matter, the absence of my voice.