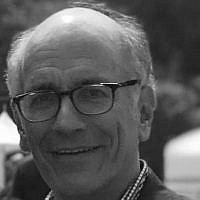 The Blogs
Steven P. Field
Apply for a Blog
Please note that the posts on The Blogs are contributed by third parties. The opinions, facts and any media content in them are presented solely by the authors, and neither The Times of Israel nor its partners assume any responsibility for them. Please contact us in case of abuse. In case of abuse,
Report this post.

This year marked the 75th anniversary of the liberation of the Auschwitz concentration camp by the Soviet army in January 1945. Auschwitz became, and has remained, the quintessential (if incomplete) symbol of the Holocaust, a metonym for the entire Nazi attempt to annihilate European Jewry. In the years since 1945, a prodigious number of museums, memorials — Auschwitz is of course both — educational programs, books, films, and the like have been created to assure that the lessons of the Holocaust are learned, and that the world never forgets.

But according to recent surveys, it appears that the lessons have been learned only incompletely, if at all, and often forgotten. Or at the very least, inadequately communicated to successive generations.

So, is it still relevant to teach the history of the Holocaust? Does such teaching function to counter antisemitism? Should we necessarily expect it to? And is countering antisemitism, in fact, the raison d’etre of Holocaust education to begin with? The answers are yes, hopefully, no, and not necessarily.

Antisemitism (antipathy towards the Jewish “race”) and its antecedent, anti-Judaism (antipathy towards practitioners of the Jewish religion), have been around for a long time. The term Antisemitismus was coined by Wilhelm Marr in 1880. Anti-Judaism is much older and derives in large part from the Catholic Church’s traditional stance toward the Jews: that they had refused to accept Jesus Christ as Savior and had crucified Him. The Church has moved far from its earlier stance and officially cleared the Jews of the crime of deicide, recognized the injustices of earlier times, and called for reconciliation.

But old and deeply ingrained attitudes are hard to eradicate. Encouraged by medieval church leaders that Jews must be separated from Christian society, governments placed them in ghettos. Some church leaders went further; Martin Luther, in his disquisitions on the Jews, was not shy about inciting hatred, and the Spanish Inquisition made persecution an act of faith.  Forbidden to own property, Jews found themselves caught between peasants and the great landowners, often collecting rents or taxes for the latter from the former. As usury was proscribed for Christians, Jews became moneylenders and bankers, fueling the perception that Jews controlled the money supply. Having no homeland of their own until 1948, Jews were dispersed across the earth, bound together by religion, language, and culture — the seeds for theories of an international cabal.

Can teaching about the Holocaust undo all of this?

Probably not. Which doesn’t mean that it’s not critically important, nor that it can’t help. The Jewish Foundation for the Righteous was created to give back, in the form of financial support, to the Righteous Gentiles who saved Jewish lives during the Holocaust, and equally to provide academically-grounded professional development for Holocaust Center staffs and Holocaust educators at middle and secondary school levels. That educational program includes survivor and rescuer testimony, but also — and crucially — rigorous examination of the historiography of the period.

Narratives of survivors and rescuers are tremendously important, but they are neither complete nor sufficient. Survivor narratives call attention to bravery, resilience, the horror of the war and the indomitable nature of the human spirit; rescuer narratives are forceful lessons in moral courage, the duties we owe one another as members of a community, and the basic goodness of human beings. Learning this aspect of Holocaust history does not necessarily teach students to be more moral, or less likely to hate, but hopefully such narratives may inculcate morality and understanding. And this is important in the battle against antisemitism.

The reason to teach the history of the Holocaust is because the attempt to annihilate the Jews of Europe is one of the seminal events of the twentieth century, and students need to be aware of how it came about. It is important to situate the Holocaust within the context of the world in which it arose, because contexts can recur.

Perhaps the greatest danger is for the Shoah to be thought of as an isolated historical event, perpetrated at a given point in time and in a particular place by particularly monstrous people, with no relevance for today and no likelihood of recurring. The truly frightening thing is that it occurred in one of the most scientifically and culturally advanced nations on earth, perpetrated not by monsters, but by intelligent human beings. Not by people with no ethics, but by people with different ethics. Not simply as yet another manifestation of antisemitism, but due additionally to identifiable cultural and societal precedents.

The development of Social Darwinism and eugenics provided a supposedly scientific basis for exclusion and ultimately murder. The first victims of this racial medicine were the mentally ill and the physically and developmentally disabled, and most of these victims — those sterilized and euthanized in the massive state-sponsored programs — were not Jews, but Aryans. These programs were implemented in large part by physicians and nurses and were the dress rehearsal for the Holocaust. A lost war, a punitive peace, economic disaster, and the resurgence of German nationalism and exclusivism, with its emphasis on “blood and soil,” engrafted upon an ingrained (though hitherto never annihilationist, not even uniquely virulent) antisemitism, constituted a deadly and flammable mix.  Pseudoscience and the involvement of the medical profession then gave Jew-hatred the credibility, validation, and even a logic that people could understand and accept. Antisemitism, a murderous ideology, had been weaponized. The rest, as they say, is history.

Survivor and rescuer narratives are powerful, and crucial for the moral education they provide, but they cannot tell the entire story. For that, the history is essential, and the history is a cautionary tale. We teach it as history and hope to effect change. If we teach for the express purpose of eradicating antisemitism, we may be in for a disappointment.

Will teaching the history of the Holocaust decrease antisemitism? I don’t know. But I believe it may reduce the likelihood of another Holocaust. And in an imperfect world, that is a good enough reason to continue doing it.

About the Author
Dr. Steven Field, a Clinical Assistant Professor of Medicine at New York University Grossman School of Medicine, and Clinical Ethics Consultant at NYU Langone Health, is a gastroenterologist, and is a member of the JFR Board of Trustees.
Related Topics
Related Posts
Comments