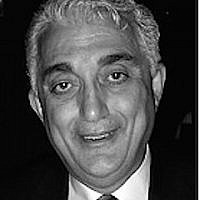 The Blogs
Fadi Zanayed
Apply for a Blog
Please note that the posts on The Blogs are contributed by third parties. The opinions, facts and any media content in them are presented solely by the authors, and neither The Times of Israel nor its partners assume any responsibility for them. Please contact us in case of abuse. In case of abuse,
Report this post.

In a Times of Israel blog post, Aaron B. Cohen wrote about a Chicago mock mediation event that involved a small part of the Palestinian/Israeli conflict and a dinner I had with him last week. In the article, he quoted what I wrote to him in an email as a prelude to the dinner. He challenged me, in the article, to post this statement on my Facebook page, which I accepted.

The statement which Aaron quoted was:

Something went wrong along the way. Without putting blame on anyone — because each of us can point to atrocities committed by the other — we need to find common elements that bind us together. We can and should be able to find a solution to this mess but only if we leave our emotions at home or if we both understand each other’s emotions. What is missing is the human element. Each side is not seeing the tragic divide from the other side’s eyes.”

Saying that each side needs to see the conflict from the other’s eyes is not a hard statement to make.

If we are ever going to come to a peaceful resolution, we need to see the conflict from each other’s perspective. Rather, politicians on both sides are trying to appease their respective political base and thus statements which neither advance the peace nor calm the boiling tensions are made in the heat of passions and thus flame an already tenuous situation. This, of course, has tragic consequences.

The current crisis is a situation where the extremists on both sides of the conflict have, once again, ultimate control. The extremists on both sides continually destroy any hopes for peace, while the silent majority in the region composed of both Israelis and Palestinians in Israel and Palestine are standing idly by as mere spectators. This majority needs to recognize itself as the majority in Israel and Palestine and needs to join forces in order to isolate the extremists; and need to demand of their leaders to finally conclude a peace — not talk endlessly to no end.

I can say categorically that rockets launched at Israel are wrong. But can Israelis say that the siege of Gaza, Palestine is also wrong?

I can say categorically that when a Palestinian killed Israeli parents on October 1, 2015, it was wrong and I condemn it. But can Israelis say that the “price tag” attack by the settlers who burnt to death the infant, Ali Dawabsha and his father and mother in Durma, Palestine while sleeping in their home on the night of July 31, 2015, is also wrong and also to be condemned?

Can we not see that the “price tag” attacks by Israeli extremists settlers are terrorist acts just as the stabbing of Israelis on a bus by a Palestinian extremists?

No one can deny that Israel needs security. But can Israelis deny that within the context of peace there is security?

Israelis need to have their first day of peace. Palestinians need an end to the decades old occupation and need their freedom.

Can both sides see the humanity in these statements?

Seeing the conflict from each other’s eyes is a must in order for peace to have any chance. The Palestinians know that the conflict was, is and will always be about the occupation of Palestine by Israel. The Israelis know that Israel needs to be a safe haven for Jews around the world after centuries of worldwide persecution.

The Palestinians have a fundamental right to acquire their freedom. Israelis need to understand this.

Israelis need to feel secure. Palestinians need to understand this.

Can both sides see the other’s concern?

For peace to have a chance, the Palestinian/Israeli majority needs to understand the conflict from each other’s perspective. They need to come together. American Palestinian and Jewish leaders need to join forces to bring the majorities in Israel and Palestine together. It is imperative that these two groups break their silence because the alternative is the continuation of the status quo — which is not a sustainable option, especially given the Palestinian population growth;
the continuation of more children on both sides being killed — which means more bloodshed; and the continuation of playing into the hands of the extremists — which means no peace.

The Palestinian and Jewish peace loving majority in the US and in the Holy Land must come together for peace.

Those who will undoubtedly criticize me for taking this stance, and perhaps Aaron as well, are thinking through a limited view, a periscope aimed at a dark tunnel, when they should open their eyes and see the panoramic landscape of the human dimensions involved.

Those who truly want peace need to stand up and be counted. I believe there is a majority of Palestinians and Israelis who want peace.

Alone they are each overwhelmed by the extremists on their respective sides.

Together, they can isolate the extremists on both sides.

About the Author
Fadi Zanayed is an author, poet, community activist and an attorney since 1985; a Palestinian Christian American whose family originates from Ramallah, Palestine; is an active and proud member of the Arab American community with a long history of community leadership and service.
Comments