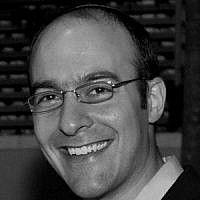 The Blogs
Yoni Sherizen
Apply for a Blog
Advertisement
Please note that the posts on The Blogs are contributed by third parties. The opinions, facts and any media content in them are presented solely by the authors, and neither The Times of Israel nor its partners assume any responsibility for them. Please contact us in case of abuse. In case of abuse,
Report this post.

As I lay sprawled along the shoulder of Tel Aviv’s Ayalon Freeway last night I couldn’t help wonder if this could really be the end. Where would the rocket land? What other options are there? Am I really going to lay here like a sitting duck?

After a few seconds, I made the dash for the relative safety of an overpass and joined a small crowd crouched under it. There we sat, strangers yet family members in the odd mix of tragic and joyous experiences we share as Israelis.  Shortly thereafter the sirens finished their wail and I felt an instant sense of relief. Standing up and walking out under the open sky I was stopped by a middle-aged man. My novice at this sort of thing was obvious. “Ten seconds,” he told me. “Wait a few seconds” a woman added.  This was the first bombing I’ve lived through, as someone who recently made aliyah, and the first time I’ve been caught in the crossfire like this.  I made my way back under shelter and before I could crouch again the thud hit. Everyone remained silent, wondering if someone’s fate was tied up in that horrible sound or if it was a successful interception.  I made my way out again to learn from my new friends that it’s best to wait in case there is another rocket. Thankfully there wasn’t and we climbed back into our cars to recreate the manic traffic that marks Tel Aviv’s roads every evening at this hour.

“Are you guys safe?” ask the worried emails, text messages and phone calls from abroad. Actually, we are, and I’m quick to reassure family and friends of it. In fact, we are probably living in one of the safest eras of our long and troubled history – but it doesn’t always come easy. In fact, last Shabbat when friends and neighbors were being called up to the army I was honestly scared. Dropping off my daughter at gan, I watched a young father from our neighborhood bid farewell to his wife and baby and had to hold back tears. But the native Israelis remained impressively calm. When I pressed for their view on whether a ground offensive would actually achieve anything sustainable, and we all know that such a campaign would incur Israeli casualties, they unanimously believed the same thing: There is no sustainable solution within reach but the offensive is necessary. Such is the price we pay – every few years we must remind our neighbors that their tactics of terror have repercussions. Otherwise they will simply never stop.

So as I gear up for a potential trip to my native Detroit to join a family simcha, friends are packing their gear for Gaza or helping families cope with the storm of rockets. The sense of duty is truly impressive and there is a tangible feeling of unity. Everyone chips in to help the wives and children of those who have been called up. Strangers are hosted at home to give respite to those living further south. And at work we’ve made rooms available in our Jerusalem building to host families who are in the line of fire. Israelis truly feel we are all in this together.

But we also know that as soon as the military campaign is over and the skies are clear we will return to the routine of tension and internal conflict that dangerously pulls at Israel’s seams. We’ll go back to that routine and jump back into the swing of things as quickly as the Tel Aviv traffic jams itself up.

So is there any way to retain the sense of common concern that accompanies war and carry it forward to improve Israelin the long term? Can we turn the Talmudic and popular catch-phrase kol Yisrael areivim zeh bazeh (all of Israel is interconnected) into a reality? Or perhaps the question should be put in the opposite: Can we hold Israel together from within after the crisis subsides? I believe that the extreme levels of unity experienced in war are simply not sustainable for the long term, but we CAN take a piece of it with us for some important change looking forward.

Now is the time for Israelis and Jews around the world to invest in projects of common concern that can be integrated into our regular routine. Acts that will mark our memory of this campaign as not only sympathizing but DOING. So as the memories of dodging rockets on the Ayalon continue to replay in my mind, I and others are organizing a caravan of volunteers to head into Ashdod, the rocket stricken city in Israel, to support the battered economy and holed-up residents before Shabbat. We are gathering people to shop at local stores and deliver the goods – including Shabbat meals – to those who have suffered greatly during this storm of explosions. But this journey of kindness will also be different from others. The trip itself will be an act of unity focused specifically in the areas where Israel needs to invest most – social cohesion.

Jews, who are too often doing battle with each other over our young country’s character and control, will join forces to help others. Secular, religious, and ultra-Orthodox Jews will go hand in hand to care for others. Citizens of Israel’s periphery, major cities, and suburbs will join together in acts of kindness. And rich and poor will share the joy of helping others in a real time of need. If we get it right they will even remember this conflict as a force which forced them to change their ways. As always, the real test will be whether we can carry some of this action forward beyond the current crisis.

I am confident we can, and to ensure success we will need to run follow-up campaigns in times of peace. Future acts of shared kindness; social and cultural events uniting the fragments of Israeli society; and bridge-building projects that encourage each to learn about the other and confront our differences respectfully as Jews. We may possibly even host each other at home to truly make this bond personal and lasting. This is not some sort of Utopian dream, it happens every day in Israel and must be expanded upon greatly. We face a crucial opportunity here and do not plan on letting it pass without at least trying to create sustainable change. Because ultimately, stopping the rockets is in the hands of others – changing the situation on the ground is in ours.

About the Author
Yoni Sherizen is a director of Gesher, a Jerusalem-based organization devoted to bridging the differences between Israelis and strengthening a shared Jewish identity.
Related Topics
Related Posts
Comments