What message does the book “Letters to Talia” have to offer us today?

Doing a Weekly Podcast on Jewish Authors is quite a challenge. This week my co-host Itai and I recorded an episode that wasn’t on one author, but two.

Letters to Talia is a brilliant book. It compiles the real letters between a religious young man (Dov Indig Z”l) and a secular kibbutz girl (“Talia”) in the 70s. The book showcases their differences and highlights the common ground we all share. I thought it was a brilliant book, on par with many of our Jewish Classics.

I can’t help but suspect, however, that the book has been misread by the majority of its readers.

Kiruv, or “bringing close”, is the Jewish concept of bringing non-observant or unaffiliated Jews closer to the Torah and to Jewish Life.¹ Letters To Talia is an outstanding example of a kiruv success story. Because of this, many religious people may read the book with satisfaction at Dov Indig’s great explanations and defenses of the Torah and of his way of life.

What is Judaism at its core? Is it mitzvah observance? Is it belief in a Creator? Is it values?

Through the progression of letters in the book, Dov tries his best to meikarev Talia and bring her to his way of life. Though the end of the book leaves us with the impression that she might do just that, after her army service, Talia actually returned to her kibbutz and her previous way of life.

The average reader may be disappointed to find that Dov did not succeed in “converting” Talia. She did not become Torah-observant.²

I have heard disappointment at this firsthand. People wonder, “Dov’s letters brought so many people back to Judaism… How could they have not affected Talia personally?”

In our previous episode, I argue that people don’t convert or do teshuva because they like Ritual Judaism… Rather, the values Judaism has to offer are what attract people, and they build from there.

When you look at Judaism from this perspective, the point of Letters to Talia is not whether or not Talia became religious (although I wish she had, and I hope she does).

So what lesson are we supposed to take from Letters to Talia? I’ll tell you in one word…

The point of Letters to Talia is to teach us the importance of Jewish unity and solidarity.³

Solidarity is one of Judaism’s overarching values. It supersedes the observance and performance of many, many religious obligations. When Avraham Avinu went to rescue his cousin Lot (despite their ideological differences), that was unity. When he argued Sodom’s case to Hashem (despite their wickedness), that was unity. When someone stands up for another in recognition of their common bond, whether it be a family bond, or a human bond, that is unity.⁴ 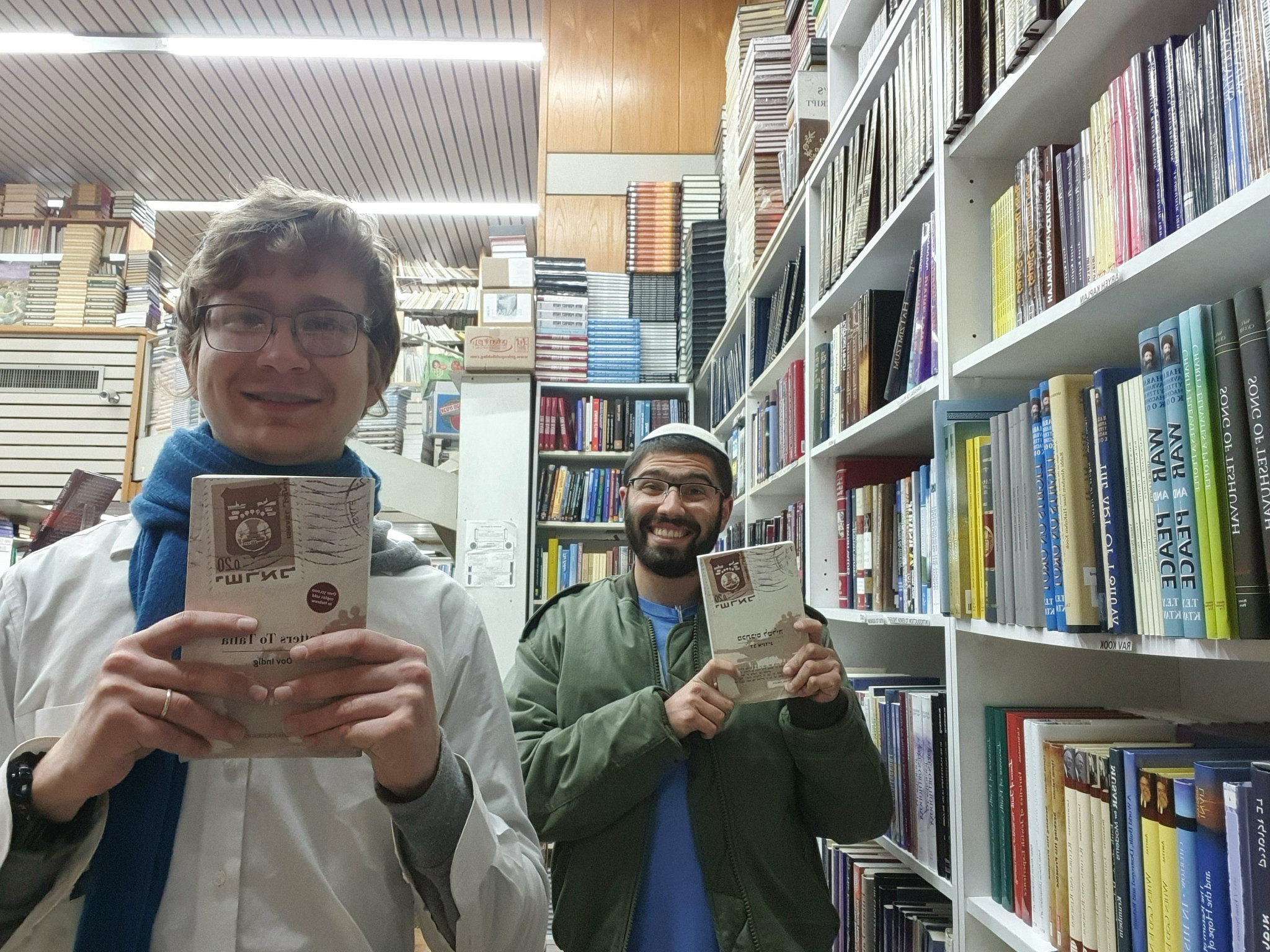 In our history, there were times that the Jewish People were united. Even though they practiced idolatry during these times, Hashem was merciful to them on account of their solidarity (Tanchuma, Shoftim 18). Conversely, the Second Temple was destroyed during a time when mitzvah observance was held in high regard, but our love for our fellow man was lacking.

If there was unity amongst Jews when we worshipped idols, and that was good enough for the Creator, how much more so are we obligated to reach out to Jews like Talia, Jews who are far from idolators.

The great Hillel called Ahavat Yisrael the essence of the Torah and the rest commentary (Shabbat 31a).⁵ Additionally, Eim Habanim Smeicha strongly asserts that the thing that will bring redemption faster than anything is unity between Jew and fellow Jew. The author of Eim Habanim Smeicha specifically calls upon Observant Jews to be kind and unconditionally loving to their non-observant counterparts.⁶

When our tradition tells us to love our fellow, it isn’t referring to your fellow who is similar to you. It is referring to showing solidarity davka with your kin that is different from you. Love all kinds of Jews. Love all kinds of people.⁷ Loving those like you doesn’t take much effort. You demonstrate your strength of character in the love you show to those different from yourself.⁸

People are attracted to the values Judaism has to offer, and they build from there.

This is why I find Talia to be the hero of the story. She goes outside her comfort zone and against the prejudice of her kibbutz and seeks to understand someone whose ways are largely foreign to her. In some sense, Talia is more religious than Dov. After all, she took pains to understand him and his way of life. Did he do the same for her? In any event, Talia followed what may be the most famous moral dictum in history: To Love our Fellow as we love ourselves.

Before my wedding, the infamous freedom fighter Ezra Yakhin gave me life advice. A strongly opinionated man all his life, his main advice to me (surprisingly) was to love every Jew, no matter how differently they think from you (This is something Chabad excels at, by the way, and it completely explains their ability to bring so many Jews from all walks of life together). After being alive for over 90 years, this is the advice Ezra Yakhin found prudent to give me.

Oh… I almost forgot to answer the question that titles this article. Can Religious and Secular Jews in Israel get along?

Of course they can. We don’t even have to all think alike for it to happen.

But it requires real dialogue. Open ears. Not superstition or prejudice. Not speculation about the other side. It requires us to remember that even those Jews not like us are still Jews and that those people that are not like us are still people. It requires us to look at our common denominators.⁹ It requires more holy Jews like Dov and Talia. I’m not the first to say this: A Symphony is beautiful not because it is monotone, but because of the variety of instruments and melodies, all playing together, all sharing the same story.¹⁰

In an era where open dialogue is becoming increasingly discouraged, it is more important than ever to have the kinds of conversation that Dov and Talia had in their letters.

May we build bridges and not tear each other down any more.

I give my thanks and gratitude to Rabbi Nissan Zibell for offering suggestions, sharing his thoughts, and helping me locate sources, and to my wife for proofreading.

¹ Rabbi Nissan Zibell pointed out to me that the Lubavitcher Rebbe wasn’t a fan of the term “kiruv“. Why? Because if you are bringing someone close, that comes with an implication that they were ever truly “far” in the first place. Chabad may be the forerunner of Jewish Outreach today, so it is interesting that the point that I will make in this article and another is underscored by Chabad’s very refusal to refer to irreligious Jews as “far”.

² Every narrative needs a conflict. In this book, the conflict is clear: Religious Ideology vs. Secular Ideology. Since Dov is the protagonist, we want him to win. But such a superficial reading of the text is not only harmful, but also directly at odds with the purpose of the book itself.

³ It was on this point that Itai and I disagreed. His feeling on our show was that the purpose of Letters to Talia was to teach Torah-observant Jews what to respond to a non-believer’s questions. My stance was (and is) that this totally misses the central point of the book, although it is an important aspect of it.

⁴ It is interesting to note that in our tradition, another name that Avraham Avinu is known as is “Eitan” (My name also!) which means Fortitude. In many ways, this is exemplified by the cases of Solidarity our progenitor showed throughout his life. In the article above, we shared the example of him rescuing Lot, and also of his sticking up for Sodom. Avraham was the living example of “together we are strong”. Indeed, the Me’am Loez points out something fascinating in a parable. There is a concept of being someone who fortifies their house and lets others fortify the city walls. Then there is the man who fortifies the city walls. If we fortify the city walls, we will have to do very little work since everyone is helping and everyone benefits. Avraham Avinu, Dov Indig, and Talia are examples of people who looked to fortify the “city walls”. A lot of us stay concerned with our own communities’ needs. We would do well to take a leaf out of Dov and Talia’s book.

⁵ These were not his exact words. I am only paraphrasing. See Footnote 7 for another quote of Hillel’s pertinent to our discussion.

⁶ See Chapter 1 of Eim Habanim Smeicha for more on Ahavat Yisrael. Specifically, in the 1998 printing, pages עב, פא, and פב. Just how important is Ahavat Yisrael compared to other commandments? Eim Habanim‘s treatment of this principle merits its own separate discussion, but here we will suffice with a brief overview. In essence, the sefer holds that even the wicked of the Jewish People will be forgiven by Moshiach and Hashem. Rav Teichtal believes strongly that we should take the first steps and create bridges between us and other kinds of Jews. He says that the medicine that the Jewish People needs to heal their wounds is reunification. He backs this thought process up with multiple sources. Of particular note, the Rav includes a quote from the Rav from Lapush, “When Moshiach comes, the Jews will do Teshuvah. What is essential now is that they love each other.” (Translated from the Yiddish)

⁷ In Pirkei Avot, Hillel tells us to “Love Everyone” (Avot 1:12). The word used for everyone is “briot“, creations. The Tanya tells us that even if the only good thing about a person is that G-d created him, that is reason enough to love him (Tanya Chapter 32).

⁸ Perhaps this is why we are commanded so frequently in the Torah to be compassionate towards the stranger.

⁹ I would be remiss if I didn’t point out the heavy influence Rabbi Sacks Ztz”L has had on my worldview recently. He believed in peace and unity. We have to remember that that is more important than whoever is right coming out on top.

¹⁰ A solid source slips my mind, but the comparison of the Jewish People to an orchestra is something I would frequently hear during my time at Yeshivat Machon Meir.

Episodes of Open Book with Eitan and Itai air weekly on Saturday Nights, Jerusalem time. Our fourth episode, on Letters to Talia, is premiering on January 23.