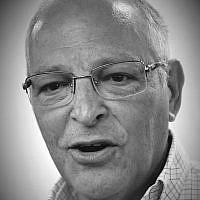 The Blogs
Nimrod Novik
Apply for a Blog
Advertisement
Please note that the posts on The Blogs are contributed by third parties. The opinions, facts and any media content in them are presented solely by the authors, and neither The Times of Israel nor its partners assume any responsibility for them. Please contact us in case of abuse. In case of abuse,
Report this post. 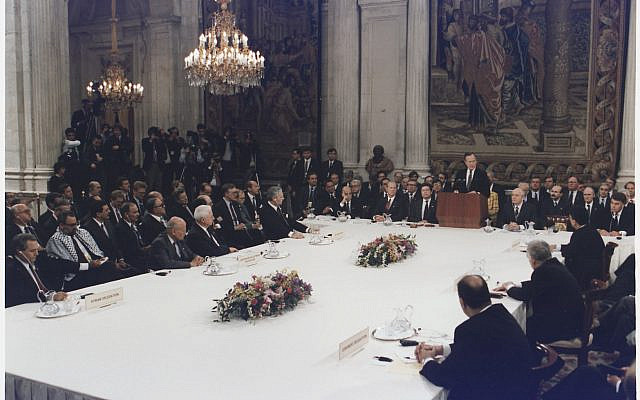 Last week, US Secretary of State Tony Blinken hosted Israeli Foreign Minister Yair Lapid and UAE Foreign Minister Abdullah bin Zayed to celebrate the “accomplishments since the signing of the Abraham Accords,” a year ago, as Blinken tweeted.  But this is not the first time Israel and Arab states took normalization steps brokered by the United States. Thirty years ago this month, the Madrid Peace Conference triggered the first wave of normalization between Israel and several Arab states.

Although no two processes are alike — and certainly not ones separated by three decades and major local, regional, and global transformations — there may be lessons from the fate of the first for the destiny of the second.

Under the stewardship of then-president George H.W. Bush and his secretary of state, James A Baker, III, on October 30, 1991, the then all-mighty US and a declining Soviet Union co-hosted an Arab-Israeli peace conference in Madrid, Spain. The breakthrough produced by Baker’s mastery of statecraft did not end with bringing tough-minded Arab leaders to join Yitzhak Shamir, the intransigent Israeli prime minister, at that summit. Instead — by design — the conference yielded a two-track negotiations process: a bilateral track between Israel and each of its neighbors (except Egypt, which had already been at peace with Israel), and a multilateral track, where representatives of Arab states and Israel, including the author of this essay, discussed a host of regional issues. Boosted by the ensuing Oslo Accords, several Arab countries responded by taking initial normalization steps so as to reward — and reinforce — the Rabin government’s peace policy and serve their respective interests in engaging Israel.

The Madrid process’s promising phase saw an Israeli liaison office in Morocco, interests offices in Tunisia and Bahrain, trade offices in both Qatar and Oman, and by 1999, full diplomatic relations with Mauritania.

Alas, that happy phase of the 1990s proved short-lived. By 2000, the failure of the Camp David summit and the ensuing Second Intifada saw most offices closed, mutual trade shrinking to negligible levels, direct tourism (where started) terminated, and official senior visits were no more.

What started as a derivative of a US-led Israeli-Palestinian peace process ended with its violent collapse.

Fast forward to the current Abraham Accords. Like the Madrid process, they were the fruit of a dynamic US engagement. Unlike Madrid, they were not designed in an Israeli-Palestinian context. Indeed, save for the UAE conditioning normalization on Israel deferring West Bank annexation, three of the four Arab normalizers — the UAE included — came to the (American) table with wish-lists that had nothing to do with Palestinian aspirations. The fourth, Bahrain, asked for nothing.

Nonetheless, one must wonder: Will the Abraham Accords fare any better than what we might dub “the Madrid Accords”? Should the absence of progress between Israel and the Palestinians lead the current normalization to end up — as previously — with rounds of violence? Will normalization survive?

With the very limited perspective of but one year, there can be no definitive answers. These accords proved robust enough to survive their first such test: last May’s 11-day violence engulfing Jerusalem, Gaza, and Israeli inner cities, which bolstered Hamas popularity, while further discrediting the Palestinian Authority for refusing to join the fighting or even suspend security coordination with Israel.

Yet even that relatively short test did leave a mark on the lead Accords signatory: the UAE. Not only was its public criticism of Israel’s actions harsher than in a long time, but privately, the direct lines of communication between Abu Dhabi and Tel Aviv (the seat of the Israeli Ministry of Defense) lit up with repeated calls on the Israelis to cease fire, lest a prolonged crisis force the UAE to take action, affecting the pace and breadth of normalization.

These repeated Emirati interventions were telling. An Arab state might pursue normalization with Israel for a host of interests that have nothing to do with the Palestinians. However, as much as it wishes to decouple bilateral relations with Israel from the complexities of the Palestinian cause, developments in the Palestinian territories have a way of imposing the issue on its agenda.

Indeed, ignoring the Palestinian issue might prove incompatible with pursuing ever greater cooperation with Israel. Whether due to popular attachment to Jerusalem or sympathy with Palestinian aspirations, or leadership concern with adversaries — at home and abroad — seeking to undermine regime legitimacy by accusing them of having “thrown the Palestinians under the bus,” Accords’ signatories may find it impossible to look the other way should violence in Palestine dominate headlines at home.

Just as previous normalizations fell victim to Israeli-Palestinian violence, progress among current signatories, let alone efforts to enlist more, might succumb to the effect of violent developments in Jerusalem, the West Bank or Gaza.

Consequently, for Accords signatories — Arabs and Israelis — and all other parties interested in their success, the normalization process is another compelling reason for addressing the Palestinian issue. As recommended in an important study just released by the Israel Policy Forum, designing a strategy that involves the Palestinians in the evolving Abraham Accords process is essential. But for that to happen,  US diplomatic engagement is required.

About the Author
Dr. Nimrod Novik, a former Senior Policy Adviser to Prime Minister Shimon Peres, Special Ambassador of the State of Israel and adviser to the Israeli National Security Council, is the Israel Fellow of the Israel Policy Forum and a member of the Executive and Steering Committees of CIS.
Related Topics
Related Posts
Comments