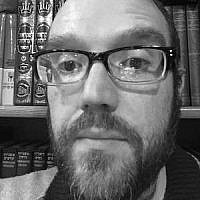 The Blogs
Ephraim Osgood
Apply for a Blog
Advertisement
Please note that the posts on The Blogs are contributed by third parties. The opinions, facts and any media content in them are presented solely by the authors, and neither The Times of Israel nor its partners assume any responsibility for them. Please contact us in case of abuse. In case of abuse,
Report this post.

I watched the spellbinding Spanish Amazon show “The Legend of El Cid,” this weekend. It takes place in the late 11th century, and focuses on a family of fratricidal Spanish kings. The hero of the series, El Cid, is orphaned at a young age with no land or titles to inherit. And yet, it is he who is universally looked to by the fratricidal kings (and their sisters), for leadership and virtue. One of their allies are the Almoravid Moorish Muslims, who were rationalist, scientific, and far more cultured than their Spanish allies. The Moorish king rules with the help of his Muslim doctor as well as a tefillin-wearing Jew. This was known in Jewish history as the “Golden Era of Spain,” when many kingdoms were ostensibly ruled by Jewish and Muslim scholars. These men were far better at statecraft and diplomacy than many of their warrior kings, having learned all manner of wisdom from Almoravid Muslim rationalist schools. At this time the Muslims were at the vanguard of science, math, poetry and art.

Sadly, the next century, would see them wiped out by the fundamentalist Almohad Moors, who despised their learned co-religionists , branding them as corrupt heathens. It was from those Almohads, that the adolescent Rambam and his family fled, eventually finding refuge in Egypt. The Muslims never returned to their positions of leaders of worldly knowledge after that, and our relationship with our cousins has obviously suffered under more fundamentalist regimes. The Christians and Muslim Kingdoms, hampered by both fundamentalist ideology (e.g., that regardless of how foolhardy their wars were, they would success as they were the will of Jesus or Allah) as well as dynastic rule, that saw unworthy men waging wars against their own brothers time and time again (each brother convinced that God willed him to be the sole leader.)  As always it made me contemplate what the message of the Torah was on these subjects.

Although the Torah does contain a commandment to “appoint a king over yourselves,” the reticence to this idea (and certainly to dynastic rule,) is hammered home at the close of the five books as well as the early prophets. Let us look at the evidence from just the scripture on this subject:

1) Moshe never mentions or considers one of his children as his successor. It is obvious that the student Yehoshua,  who “never left his side” , would be the military and spiritual leader to lead Israel into the Promised Land. The Talmud point out the Moshes son shows up later (his name very thinly disguised), so desperate to be a spiritual leader, that he takes up as the priest for a temple of idolatry. Here is one who is so desperate to lead, that who and what he leads is immaterial.  Moshe as the “most humble of all men” surely knew not only his own limitations, but those of his family as well.

2) We next confront the issue of dynastic leadership in Gideon, a “simple man from the smallest of houses (and the tribe of Menashe no less), who rises up to great military victories against the enemies of Israel. When offered the crown, Gideon says “I will not lead you nor my sons after me, only God shall lead you. Excellent notion, however when a man fathers 70 sons, not all of them will heed their fathers wisdom. One son Abimelech (surely a self styled moniker) does want to be King and murders 68 of 69 of his brothers to achieve a short lived rulership. Only Yotam escapes, and shortly before Abimelech dies, Yotam  shouts, from a safe distance, a stirring piece of poetry. The subject of this early “rap battle” offering, is how unworthy Abimelech is of the crown. Symbolically his crowned head is crushed by a millstone pushed by a women. The message that lineage and might are not what is needed to be a great leader are very apparent.

3) In the book of Shmuel (still before the first king), the leadership was first with Eli the head of the Cohanim. He planned on his two sons following his humble path of spiritual leadership , focused not on material wealth and rule but in leading through service to God alone. Sadly, inheriting this position was not enough to satiate them. They wanted more in the form of bribes and sexual favors from those who humbly came to donate as pray in the “House of God.” Not only would they not inherit their father, but God tells Shmuel, his prophet, that Eli’s entire house will be wiped out to make sure that this corrupt seed down not rise again. The irony is the Shmuel himself (who is the first prophet in this era  to have national  approval and respect) believes that his own sons will follow him in this role. Shmuel, himself as humble and worthy as Moshe and Aharon, was raised in the house of God from the moment he was weaned. His sons however, burdened with the mantle of greatness, turned out as corrupt and unworthy as Eli’s sons, and are struck down by God as well.

4) Perhaps those lessons hardened Shmuel to the pitfalls of dynastic leadership , as he objects when the people ask him to fulfill the Torah’s commandment to “appoint a King over yourselves.” He warns the people that a King takes everything from you for himself and you are left with nothing. He seems to be objecting to the people’s notion of having a King “like all the other nations”. That is what those Kings will do. Surely, he would approve of a worthy King who serves only the people and the will of God. Shmuel is not only a prophet, but has the wisdom of his and Eli’s failure as parents as well. He sees what will come in the future of Israel. Few and far between are the worthy and righteous Kings, humbly serving the will of Israel and God. Most of the Kings served their own desires for more power and wealth than any one man could need.

5) Finally we come to the truly sad story of the children of David (himself a servant of God and the people, despite a few miscues). David suffered not only the rebellion of Absalom in his prime, but on his deathbed, having promised the throne to Shlomo, had to see Adoniah defy his will and attempt to usurp the throne for himself. We are told that the reason that Adoniah felt righteous in his cause, was because he was spoiled by his father. “David never told him ‘no'” the verse testifies. A spoiled and entitled prince will make a poor king. A few of them will also inevitably lead to civil war. Shlomo (titular man of peace) tried to have mercy, but eventually had to kill Adoniah, when he attempted to rise again.

Sadly these stories of corrupt  and sometimes fratricidal kings became the rule rather than the exception for much of human history. Even after the tall of dynastic monarchies, rarely do we find a leader who humbly serves the needs of his people and country. Two particularly corrupt and self serving leaders are sadly, the previous (and possibly future) leaders of Israel and America , Donald Trump and Bibi Netanyahu. These two share a genuine affection, predicated on sharing strategies for how to use their office for it’s two main functions: a) surrounding themselves in opulence and luxury b) using their office to crush the voice and future of any who challenge them. I wonder if they ever talked about leaving office and spending time together … in prison. Sadly this is unlikely as, despite the wishes of many in both countries , neither of them are likely to be extradited to serve out their (fingers crossed ) prison sentences together.

I for one will miss the previous government, where opponents Bennet and Lapid (both seen as fairly extreme right and left respectively) decided to share the leadership, to serve the greater good. That this was facilitated by an even braver and bolder leader Mansour Abbas, was truly heartening. Leading the first Arab party to join a ruling coalition, was brave and courageous. That his motivation was trying to do something to stop the crime and poverty in his community, will hopefully inspire others. I don’t think that we have seen such cooperation in ruling a country, between Jew and  Muslim since the fall of the Almovarid. Maybe this will be a harbinger of further cooperation and peace in our time (as far fetched as it seems today).

About the Author
Rabbi Ephraim Osgood has been a teacher of Torah and Jewish History in Los Angeles and Chicago for the past 10 years. In his free time he enjoys reading graphic novels (that's comic books in layman's terms), Jewish History, and anything that piques his interest. He has six children one all of whom are well behaved, adorable budding prodigies.
Related Topics
Related Posts