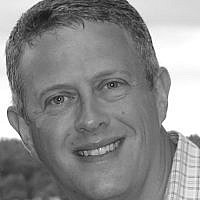 The Blogs
Todd Richman
Apply for a Blog
Advertisement
Please note that the posts on The Blogs are contributed by third parties. The opinions, facts and any media content in them are presented solely by the authors, and neither The Times of Israel nor its partners assume any responsibility for them. Please contact us in case of abuse. In case of abuse,
Report this post.

And G-d saw the earth, and behold it had become corrupted, for all flesh had corrupted its way on the earth. Genesis, Chapter 6.

How fitting is it that last shabbat’s parsha on Noah and the flood was read the weekend before this year’s presidential election? G-d sees a corrupt, violent and unjust world, and decides to destroy it with a devastating flood to start anew. We say that the Torah has meaning for all things current. Low and behold, it has done it again.

Now I am not saying that the earth should succumb to a ravishing flood, but I would say that we should look at the state of affairs of our country. All we need to do is observe how we are treating one another during this presidential election. Listen to how we are characterizing the supporters of each candidate and how our presidential candidates are being described by its opposition. We have the crooked and corrupt one who belongs in jail, verses the racist, sexist, and moronic one. Just scroll down your Facebook feed and see how our country has sunk to a new level of despair, helplessness, obnoxiousness, crudeness, and violence.

This is why it was so telling that so many people, including the candidates themselves, couldn’t grasp the importance of the debate question that asked if each candidate could say one thing they admire about the other. To me it seems that if today was transposed to the time of Noah, the disgraceful way we have treated one another during this election would have been a perfect foundation for leading G-d to the same conclusion that He came to then, that He needed to do a reset on humanity. And G-d said to Noah, “The end of all flesh has come before Me, for the earth has become full of robbery because of them, and behold I am destroying them from the earth.”

Now we all know that with Trump we are unsure of what we will get with a Trump presidency because he lacks a political record and the fact that he has so few established policy advisors.

And we all know that with Hillary you are more assured of what type of presidency you will get because she has a political record and has surrounded herself with individuals who have governmental experience, whether you agree with them or not.

Each side is supportive of these traits and deem their candidate as having the right qualifications to lead this country. However in so many conversations that I am a part of the constant theme is not if they are qualified, but are they truly the best that America has to offer? Maybe they are and maybe they are not.

What interested me most in last week’s parsha was the question of whether Noah was the most qualified person to lead humanity after the flood. Was he really the only righteous one left for G-d to choose?

No one is asking or expects Hillary Clinton or Donald Trump to be flawless. As we know Noah wasn’t either. The parsha states, “and he drank of the wine and became drunk, and he uncovered himself within his tent.”

So it was that after the flood, Noah, who had built himself an arc that survived the worst disaster ever to behold our planet, could not take that next step and lead. Instead he got drunk, he disrobed, and was not ashamed at what he had become.

And this is where we are today. Can these two candidates lead this country? Can they take their troubled past and put it behind them? Even more importantly can the people of the Untied States look away from what they perceive is the embarrassment of these two individuals as Shem and Jaspeth did for Noah, when their father was naked? And Shem and Japheth took the garment, and they placed [it] on both of their shoulders, and they walked backwards, and they covered their father’s nakedness, and their faces were turned backwards, so that they did not see their father’s nakedness. Can the American people do this and accept the victory of the other?

Can the people of our great country come together for a moment in time like the people of the world did in order to build the Tower of Babel? And even though G-d dispersed his people and scattered them across the earth with different languages because he was not pleased by this project, they were still one with the earth and one with G-d. The question is, can we, too, as a diverse nation, be one with the earth or at least one within our country? I guess we will find out on November 9th.

About the Author
Todd Richman is a financial advisor and managing director with a firm based in New York City. He is active in several pro-Israel and Jewish organizations most notably AIPAC and UJA-Federation of New York. He previously worked as a non-profit executive for such organizations as the American Israel Public Affairs Committee (AIPAC) and the American Jewish Congress. In the 1990s he was a Democratic consultant running and raising money for Congressional campaigns. For his commitment to Jewish life and community service, he was recently honored with the Robert S. Boaz Award by UJA-Federation of New York.
Comments