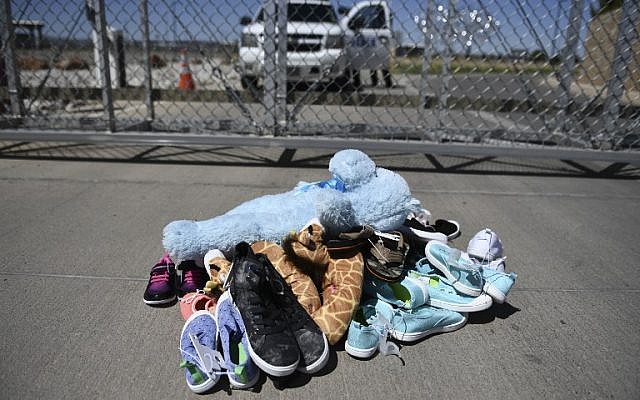 Shoes and toys for immigrant children are left at the Tornillo Port of Entry near El Paso, Texas, June 21, 2018. (Brendan Smialowski/AFP)

In the winter of 1987, I traveled with a Hungarian friend to Auschwitz. The year before, I had quit my legal job to pick avocados and study Hebrew at Kibbutz Ma’agan Michael. Six months later, my guacamole duty over and being somewhat fluent in Hebrew (much better than now), I hooked on with a group of Israeli lawyers lobbying the Soviets at the Council of Security and Cooperation in Europe in Vienna, then headed to Eastern Europe.

Reaching Auschwitz by Communist public transportation was challenging. To get some limited understanding of what the journey had been like, we tried to maximize the discomfort. We travelled alone, on a train, in the cold, without a real plan of how to get there and not being sure what awaited us. We reached Auschwitz midday the following day. By the time we toured the camp, we were alone in a concentration camp in the winter cold as the heatless sun descended and a dog barked incessantly in the distance.

Six years later I took a much different journey to Ellis Island, the point of entry to America for so many Jewish immigrants from Eastern Europe. We arrived on a bus filled with food and friends, then joined thousands of others touring the museum and patronizing the gift shop.

Walking around Ellis Island though, I was struck by how similar some of the exhibits were to those at Auschwitz. There was the exhibit of the clothes people wore when they arrived, the spectacles they used, the identity papers they carried and so on. It was eerie. Perhaps more at that moment than ever before, I realized that context is everything.

In both places tens of thousands of people were lined up, not sure of where they were going or what awaited them, but the endings were completely different. In each case, some were separated from the rest, but in Auschwitz the end for nearly all was the gas. In Ellis Island the end was the beginning of a new life.

I’ve thought about that recently as so many in the United States began using Nazi references to describe the actions of our Immigration and Customs Enforcement (ICE) agents in separating children from their parents or other guardians if they enter this country illegally. The controversy grew so intense that for the first time, President Trump performed an about face and stopped the policy of family separation.

I’m sure the emotions expressed were real, but the Nazi hyperbole was improper and frightening.

The most direct Nazi comparison may have come from MSNBC commentator Donny Deutsch. On Friday, June 22 Deutsch said “if you vote for Trump, then you, the voter, you, not Donald Trump, are standing at the border, like Nazis, going ‘you here, you here.”

Donny and I went to college together at the University of Pennsylvania. We weren’t friendly, but I knew who he was and I’m pretty sure he knew who I was. Listening to him last Friday was painful. That someone as generally intelligent and decent and he would resort to Nazi comparisons not only shows how far his antipathy for Trump has reached, it shows how dangerous it is to cheapen the Nazi comparisons.

Context is everything. If ICE agents are Nazi concentration camp guards, and if Trump voters are Nazi sympathizers, then the uniqueness of the Holocaust is lost. The horrors of the gas chambers, torture, brutality, execution squads and systematic, mechanized slaughter that murdered six million of our people is minimized. It becomes equivalent to tens of thousands being caught trying to sneak into the United States across our Southern border, then having the children separated from their parents while their cases are pending. Clearly the children are traumatized, but they are not murdered. If the two stories are equivalent, then maybe the Holocaust wasn’t so bad.

There were good reasons to oppose the Trump Administration’s family separation policy. Most religious denominations publically did so. How dare Donny or anyone else however, claim that a Trump supporter is the equivalent of a Hitler supporter.

Neither of us voted for Trump, but I know many who did. They haven’t murdered anybody, and wouldn’t stand mute should that happen. Actually, the most Nazi-like action I’m seeing is the hysteria of people like Donny Deutsch letting their emotions overwhelm their good judgment. They make it much easier for the demagogues among us like Trump and California Congresswoman Maxine Waters to divide us.

Donny is better than that, as are so many people on the American left. Indeed the pushback by respected figures such as Senator Chuck Schumer and others against the descent into chaos has been gratifying. But the fact that so many have been willing to use Holocaust imagery to make their political point will have the opposite of its intended effect.

Since World War II our rallying cry as Jews has been “Never Again.” Throwing around Nazi comparisons so cavalierly desensitizes us from understanding the true horror of the past. Doing so makes it more likely that yes, there will be an “Again.”