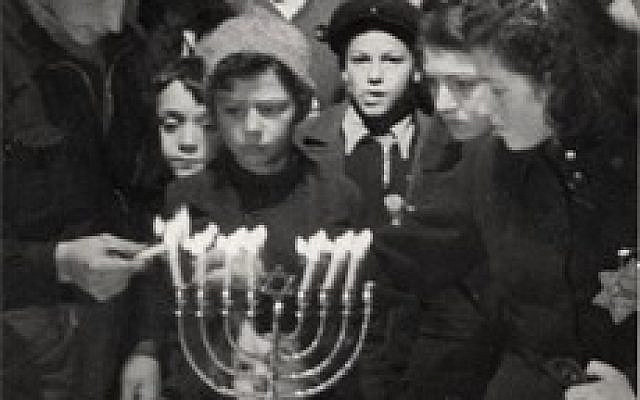 More than half a century ago, when I was a young kid in boarding school, in Israel, we used to spend weeks in preparation for Chanukah. Finally, late afternoon on the eve of the first night, right before dusk, we’d all line up in front of our bunks, boys and girls waiting impatiently. When our turn came, we’d join in and march in orderly fashion onto the main road, and down to the Village Square, while singing at the top of our lungs: “אנו נושאים לפידים” – In dark nights we carry torches to light the way. Hundreds of kids paraded in the darkening night. The road was lined with Guznik luminaries, twinkling paper lanterns filled with sand, each one holding a candle on top. It looked like a landing strip awaiting the approach of some celestial chariot. As we congregated, forming a large circle in military order, an older kid would light a large fire in the middle of the field, and the air became filled with magic. We felt inspired, like soldiers conscripted into a battle for the heavens, singing with the confidence only kids can have. We felt invincible—at least until the next morning. This was my initiation into the power of Chanukah.

Many decades later, having celebrated Chanukah dozen of times with my kids and later with my grandkids, I think of those times with longing. Yet, as I recall my childhood experiences with warmth, I no longer feel invincible; not even as I light the candles with my family. With the gained experience and perspective, I think of the pain, suffering and injustices that are pervasive around me, and while I am a proud Israeli and forever a devoted Jew, this realization seems to spoil my past invincible memories.

I think of Jews who celebrated Chanukah in concentration camps, right before being sent to their death, and children who lit candles in Transit camps, like Westerbork in the Netherlands, before being deported to the darkness.

Jews are called ‘a light unto the nations’ yet I realize that despite singing songs about lighting the darkness for as long as we have – our world has not caught on.

Should this be a cause for despair? The world in general and Jews in particular, have never been better. More people have a warm meal and a roof over their head than ever before. We have Israel, a Jewish State, that brings a sense of safety and hope to Jews all over the world.

In celebrating Chanukah, we honor the ideal, yet we don’t prepare kids to balance such shiny aspiration with the grey reality of our less-than-ideal world. Thus, they grow to doubt the stories and myths they grew up with, helping to widen the gap between the generations, between different realities and ultimately – between us.

However, through the isolation brought about by the Covid 19 pandemic raging around us, I’ve noticed a change in this year’s tone of Chanukah celebrations. Instead of succumbing to despair, there have been more appeals than ever before to light the darkness. The media continues to explode with new flash-dance videos and Maccabeats’ like songs, including Rav Mo’s beautiful rap – Find the Light in the Darkness, and some strange and unexpected – watch Daveed Diggs – Puppy for Hanukkah.

I was sad to read the piece, ‘Saying Goodbye to Hanukkah’, that appeared recently in the NY Times, but I think the author, who wrote: “Discontinuing my family’s Hanukkah celebration fits right in with our family’s tradition of bucking tradition. Most families do this in some way, even if just adjusting the Tooth Fairy’s gift for inflation. As a queer person, I know my kids will grow up alongside other children whose families created their own way of doing things because the old way hurt or didn’t fit,“ does not represent my world. In contrast, over the different media outlets, I’ve seen and explosion of Chanukah menorah lightings and other expressions of the Chag all over the world, with Jews who refuse to give up in the face of many challenges around them.

But beyond it all, I find it truly inspiring to follow the refusal of the millions of people worldwide who fear the pandemic and who live in isolation, yet refuse to give in. They maintain the struggle to keep this nation, and others, united in the face of this existential global threat. People keep working – many from home, they keep caring for the sick, with growing degrees of protection, and they—we maintain the rush to betterment, in developing a vaccine, and work toward a better future. All this is happening in the midst of grappling with the fight over elections results, and other news reports that remind us that the darkness is never very far away.

I listened to Britain’s PM Boris Johnson’s two-minute 2019 Hanukah uncompromising appeal to battle antisemitism, intensified by his dreadful predecessor. I feel uplifted by the growing list of countries opening consulates in Jerusalem, and others, long-time enemies, who are signing peace treaties with Israel. Modern time Maccabees around us, performing acts of bravery and caring, continuously add to the light.

The power of holidays is in helping transform people and I feel a special charge this year in seeing how, despite the caution and safety mandated by this year’s unusual circumstances, Jewish life has never been stronger. Chanukah celebrations are taking precedence and families are celebrating – some by meeting and lighting candles outdoors, some in person and others via ‘Zoom’. Shabbat celebrations are being broadcast across the Web and around the world, with new young people joining in. In short – I feel hope again and I sense that our rabbis, parents and leaders’ insistence that we should not lose faith, is ringing ever truer these days.

So, can we truly bring light to darkness with Chanukah?

I feel that it is truer today than I ever remember it.

Keeping the faith is an absolutely wonderful mission.