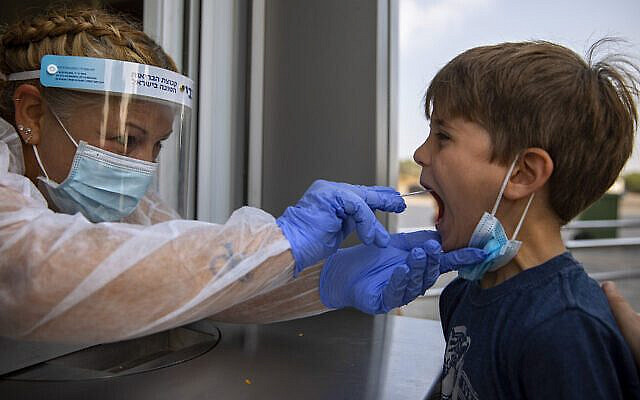 A health worker collects a swab sample from a kid to test for COVID-19, at a coronavirus testing center, in Tel Aviv, Israel, Aug. 9, 2021 (AP Photo/Oded Balilty)

While many lives have been saved, and many deaths have been prevented by reducing the severity of the COVID-19 pandemic, the virus is still among us and can cause illness. To prevent the spread and make sure people know to get the right treatment, widely available at-home antigen tests can help people find out in a fast, cheap and easy way if they have a covid or not with a relatively high level of accuracy. Furthermore, effective treatments and medications like paxlovid have been shown to reduce the damage COVID does to the body and enable faster recovery from the virus. Testing early when there is suspicion one might have covid not only prevents the spread of the virus to others but can also help one reduce the long-term risks of having the virus in allowing for the right treatments to be taken. The question the Sabbat observing individual might run into is whether or not one can take a home antigen test or not.

The question of taking a home antigen test has multiple facets: does it make a difference if one lives alone or with others, in which case finding out might spare those living with them from contracting the virus? Is there a difference between individual situations, such as a person who is immunocompromised or if they are weakened from a previous covid illness in a way that getting it again might endanger them? Similarly, one must ask how to address this question when living or caring for someone who is immunocompromised or at higher risk. Another consideration when addressing this question is that while one might not be allowed to take the test themselves on Shabbat, one must ask if it is permissible to take the test if the test is administered by a non-Jew who has no obligation to observe the Shabbat.

To properly address this question, we must first ascertain how the at-home antigen test works. So here is my non-medical review of what the test involves and what the test kit and administration of it involves, and how that might relate to Shabbat prohibitions:

To administer the test, one needs to open a sealed plastic wrapping that has the swab in it, remove the swab with a cotton edge, and swab it five times around deep in each nose nostril (some swab it first under their tongue), shaking the small plastic liquid container, opening its cap, squeezing the bud of the swab into the liquid to extract the salvia into the fluid, taking off the white cap, dripping three droplets into the whole on the testing card, and waiting fifteen minutes for the results to show.

Let us address the potential prohibitions that might come into play when administering this test on Shabbat.

In general, the rabbis forbade engaging in medicine and taking medications on Shabbat when matters are not urgent (see Shulchan Aruch, Orach Chaim 328). Furthermore, anything having to do with measuring and its like is forbidden on Shabbat. Another important issue that comes up on this issue is the melacha of Sochet, extracting, which arises when squeezing the bud at the top of the swab into the fluid that is in the tube.

Another important melacha of Shabbat that can come up here is the melacha of Tzovea–painting or dying. Since at least one line on the testing card turns permanently red, taking the test might be prohibited due to the melacha of Tozvea.

When discussing the potential prohibitions, it is also important to account for different levels of the virus posed to individuals and to public health, how that is affected by the vaccination status of individuals and communities, and what kind of variant might be affecting a community at the time.

It is important to note, that while this question is a relatively new one in the world of Halacha, there are already several approaches to it.

Rabbi Menachem Pearl, senior director of the Zoment Institute for Technology and Halacha, in an article for the Techumin Journal, permits antigen tests on Shabbat on the following grounds: opening the container is permitted just like the opening of any other container which is usually emptied out right away. Since squeezing the fluid off the bud of the swab is done directly into another fluid, it is permitted as Sochet directly into another fluid is permitted.

With regard to the prohibition of Tzovea caused by the permanent red line/s on the test card, which in his opinion can also form the prohibition of Kotev (writing), as well as the line on the cad, conveys an understandable message which we rule ( Mishna Brura 340:3) is a Torah prohibition even if it is just one understandable line. Nonetheless, Rabbi Peal contends, since the writing itself has no need whatsoever and since the writing/dying is an indirect and delayed result of one’s actions, it is therefore permitted. He relies on the ruling given in Rabbi Neuwirth’s book Shmirat Shabbat Kehilchata, permitting a urine test since the painting of the strip is indirect and delayed (grama) and is permitted for the sake of someone who is sick. Rabbi Pearl goes on to conclude that since the only Shabbat prohibition is Tzovea, and that is done here with a Grama, it is permitted where there is a pressing need (examples he gives are to prevent people from quarantine or if a rabbi is supposed to give classes and there is no one who can give it instead of them). If, however, there is no urgent need to take an antigen is forbidden even if it prevents one from attending Minyan.

While I was not able to confirm it, it is said that Rabbi Mordechai Willig’s opinion is that antigen testing is forbidden on Shabbat as it constitutes the melacha of Tzovea while Baruch Efrati from Israel completely permits administering the antigen test, with no restrictions. Interestingly, some of this debate goes back to the same debate there is among contemporary poskim regarding the permissibility of administering a pregnancy test on Shabbat, something permitted by some and forbidden by others.

It is important to add to this discussion, which has for the most part taken place among Israeli rabbis, that outside Israel, there is a leniency that can apply to some, and that is the ability to have a non-Jew who is not obliged and is even forbidden from observing the Shabbat the way we do, help with administering the test. Since we have narrowed down the potential prohibition, according to most Poskim, to be the issue of Tzoviea, and turning the one or two lines on the test card red, if someone is able to get a non-Jew to just put the three drops from the bottle into the hole in the test card, something that is very short, can be easy to ask and bypasses the most serious halachic challenge to taking an antigen test on Shabbat, it would surely be permissible. Needless to say, this would only be permissible if one needs to find out if they are positive on Shabbat, not if someone needs a negative antigen test to get on a flight after Shabbat, something that would also be forbidden become of hachana–the prohibition on preparing something on Shabbat.