The Blogs
Shimon Fogel
Apply for a Blog
Advertisement
Please note that the posts on The Blogs are contributed by third parties. The opinions, facts and any media content in them are presented solely by the authors, and neither The Times of Israel nor its partners assume any responsibility for them. Please contact us in case of abuse. In case of abuse,
Report this post. 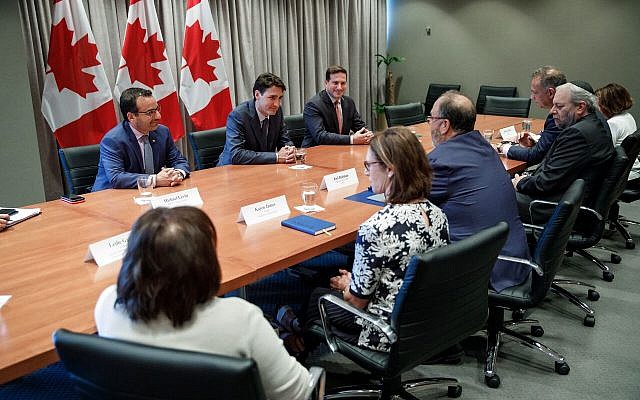 Many in the Canadian Jewish community were disappointed by Prime Minister Trudeau’s statement in May on the Israel-Gaza border clashes. Among other deficiencies, grassroots community members were deeply concerned by its failure to mention Hamas and its role in driving the violence.

At the time, the Centre for Israel and Jewish Affairs (CIJA) – the advocacy agent of Canada’s Jewish Federations – criticized the statement. CIJA also mobilized nearly 10,000 Canadians to write to the Prime Minister and voice their concerns and engaged the Prime Minister’s office to schedule an in-person meeting.

Last week, CIJA led a delegation of senior leaders from JFC-UIA and Jewish Federations across Canada to meet with the Prime Minister for a substantive discussion on Israel, Gaza, and the danger Hamas poses to Israelis and Palestinians alike.

This is not the first time CIJA has met with Prime Minister Trudeau, with whom we have frequent informal meetings throughout the year. We often meet with federal government officials to discuss a range of social policies, human rights issues, and, of course, the Middle East. Our goal in these meetings is to strengthen Canadian support for the Jewish communal agenda and to ensure this backing is sustained for the long-term.

Being an effective advocate means giving credit where credit is due, while also being willing to speak out and have challenging conversations when necessary. In the case of this meeting, although the subject was a challenging one, the discussion was frank, constructive, and encouraging.

The delegation directly conveyed to the Prime Minister the truth about Hamas and its orchestration of the Gaza border violence. We were unequivocal in pointing out how Hamas is the primary source of the difficult humanitarian situation in Gaza.

And we emphasized, as Canadians, just how important it is for Canada to be firmly supportive of Israel when our democratic ally is under assault, whether from terrorists in Gaza or anti-Israel resolutions at the UN. The latter point was offered in light of Canada’s recent decision to abstain on a UN General Assembly vote that criticized Israel and failed to mention Hamas.

The Prime Minister’s willingness to listen to these concerns – and his responsiveness to them – was encouraging. He demonstrated a clear understanding of the destructive role Hamas plays. He recognized not only Israel’s obligation to protect its citizens from terrorism, but also Israel’s will and ability to hold its troops to a high ethical standard, rather than be targeted by an inherently prejudiced international investigation. And he committed to be more vigilant in opposing anti-Israel resolutions at the UN.

Notwithstanding our concerns about its response to the Gaza situation, the Government of Canada under Prime Minister Trudeau has taken a commendable position on various issues of importance to the Jewish community. The government has expanded the Canada-Israel Free Trade Agreement to create jobs and boost the economies of both countries. It has vocally opposed the divisive and counterproductive BDS movement. It has maintained Canada’s record of voting against a number of annual anti-Israel resolutions at the UN General Assembly. And the government has spoken out against efforts to single out Israel and distort Jewish history at UN forums like UNESCO.

When it comes to the greatest strategic threat currently facing Israel – the extremist Iranian regime – Canada has generally maintained caution. The government has continued to levy key non-nuclear sanctions against Iran and maintained its designation of Iran as a state sponsor of terrorism. Last month, government MPs voted in favour of a parliamentary motion denouncing Iran’s genocidal threats against Israel, halting the renewal of diplomatic ties with Iran, and calling for the Islamic Revolutionary Guard Corps (IRGC) to be listed as a banned terror group.

All of this is welcome and significant. Pro-Israel Canadians, including those who joined CIJA in criticizing the Prime Minister’s statement on Gaza, should assess a government’s record in its entirety. Our goal cannot simply be to make our voice heard, but to effect real, positive improvements in areas of policy that matter to the Jewish community.

This meeting was a key step in our ongoing efforts to do so – and gives us reason to be cautiously optimistic.

About the Author
Based in Ottawa, Shimon Koffler Fogel is President and CEO of the Centre for Israel and Jewish Affairs (CIJA) - the advocacy agent of Canada's Jewish Federations.
Comments