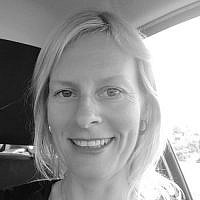 The Blogs
Arielle Listokin
what we practice is what we become
Apply for a Blog
Please note that the posts on The Blogs are contributed by third parties. The opinions, facts and any media content in them are presented solely by the authors, and neither The Times of Israel nor its partners assume any responsibility for them. Please contact us in case of abuse. In case of abuse,
Report this post.

I suppose I wouldn’t even have had to put pen to paper, so-to-speak, if each of my three children (ages 3, 5 and 7) had enjoyed just a single end-of-year party at their gans and schools. Hallevay! But first it’s goodbye to the student-teachers. Then the gannenet machlifah. Then it’s a party for the student who’s moving away. Then the mechanchim. Then the gan. Then the tzaharon. You get the idea. And, of course, each goodbye, each ending is marked by the distribution of junk food.

The distribution of junk at our schools, gans and tzaharonim has become routine, taking place at least a few times each week. Our maons give cookies and Cheetos to one-year-olds and this is – shockingly – both legal and culturally acceptable, despite the fact that its consumption has been proven detrimental to the health, welfare, and brain development of our children.

Why are my tax shekels being used to promote diabetes? Why are kaytanot beit sefers across the country serving cotton candy and other foods that promote metabolic syndrome? Why are tzaharon-run camps offering chocolate spread for auchat eser? Why is our country supporting the kind of unhealthy eating habits that lead to childhood obesity and a host of other medical issues for which we will all pay down the line – be it in sick days, disability, medical care or final decades spent without any quality of life?

And so, to you, Minister Bennett, I say with the utmost respect: Your chozer mankal, which was significantly revised two years ago to address issues of nutrition in gans and schools, was a positive step in the right direction. But now – as we stand on the cusp of a new academic year – now is the time to take another very important step in that direction and make sure that the chozer is implemented and enforced.

Furthermore, clarification is desperately needed with regard to gray areas like: kabbalat shabbat, holidays, cooking/baking activities, birthday parties, camps, and impromptu treats brought by well-meaning parents who show up with krembos “lefanek hayeladim.”

Please make it clear that under no circumstances – be it a holiday, birthday party, or welcome-to-kita-aleph prep session – organized by the school or organized by the va’ad horim – should sodas, choco, juices, tropit, or other sugary drinks be distributed at school. Please make it clear that marshmallows and candies have no place in our educational institutions, even when it comes to congratulating a job well-done.

Imagine what would happen if we nourished those young brains instead of plying them with a constant stream of empty calories. Picture a world where our children are stronger, smarter, more emotionally resilient, and better able to focus. It’s a world that’s within our reach and it’s the one we owe to the next generation.

Nothing less than the future of our country is at stake here.

Minister Bennett – I realize the tremendous forces that you are up against in trying to change the food culture in our schools and in fighting the powerful economic and political interests vested in continuing the status quo.

But by failing to clarify and enforce the chozer mankal, the government itself bears at least part of the responsibility for the increased incidence of childhood obesity and illness. Of course, parents can do whatever they want in their own homes. But in our daycares, nursery schools and grade schools that are licensed, regulated, and/or funded by our government and our tax shekels, the distribution of junk must be stopped.

A Hebrew version of this article appears on mynet: http://mynetjerusalem.co.il/article/309321/5

About the Author
Arielle Listokin (New York to Jerusalem, 2005) is a freelance writer.
Comments