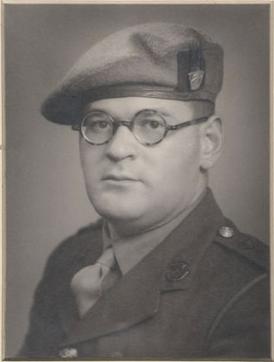 A tenet of classical anti-Semitism is the stereotypical cowardly Jew. In the bigot’s self-promoting and self-affirming mind, Jews can be made to serve but will never volunteer for front-line, or dangerous military service.

Mark Twain was one of, if not the greatest American literary humorist, journalist, and observer of American popular culture in the 19th century. He reflected the majority American view of the American Jew.

He is a frequent and faithful and capable officer in the civil service, but he is charged with an unpatriotic disinclination to stand by the flag as a soldier — like the Christian Quaker.”

Across the “Pond”, Roald Dahl was a famous British author of popular culture novels and stories, many for children, such as Charlie and the Chocolate Factory. His books have been published in the hundreds of millions of copies.  His influence has been vast. His anti-Semitism, especially in contemporary Britain, is well established and blisteringly damaging.

British anti-Semitism is shamefully in resurgence.

Just before his death in 1990, Roald Dahl said, “why do so many hate Jews? Hitler was a stinker but was he right about Jews?’ … ‘I never saw a Jew in the front line.”

The Jewish American Society for Historic Preservation (JASHP) has an active U.K. branch run by Martin Sugarman. Sugarman is a respected historian and educator. He is an archivist associated with the (British) Association of Jewish Ex-Servicemen and Women. Martin is the director of JASHP’s U.K. branch. JASHP provides the funding, but Martin is the man on the ground making things happen.

Together, JASHP and its U.K. branch have been adding to the fight against British anti-Semitism by creating visible, historical facts on the ground through permanent marker projects. The markers reflect upon the commonality of the British Jewish experience.

Most recently, the U.K. branch placed a new historical marker for Captain Simmon Latutin, G.C., (George Cross).  The George Cross is one of the highest medals of honor for courageous actions given by the King to British subjects during World War II.

Captain Latutin’s G.C. was presented to his family.  He died saving others.

The permanent stone marker, placed on the building in which he lived, is a stick in bigots like Dahl’s eyes. 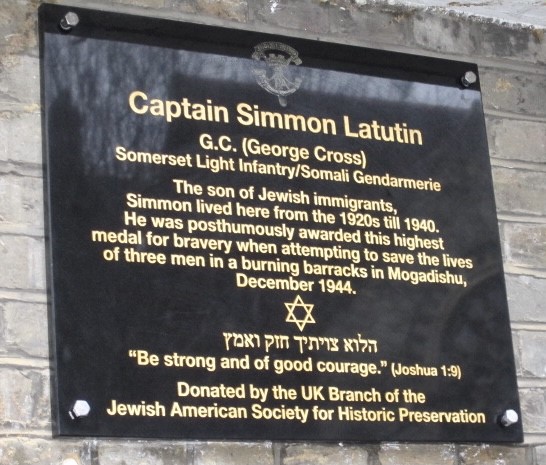 The son of Jewish immigrants, Simmon lived here from the 1920s till 1940. He was posthumously awarded this highest medal for bravery when attempting to save the lives of three men in a burning barracks in Mogadishu, December 1944.

Donated by the U.K. branch of the Jewish American Society for Historic Preservation.”

Fighting anti-Semitism is an unending universal struggle for Jews fought on many fronts and in many ways.  The Jewish American Society for Historic Preservation.

Simmon Latutin was born to an orthodox Jewish working-class family. They lived at number 20, North Villas (2) Camden Town, London. His father was distantly related to a famous Russian Jewish general of the same name who had later lifted the siege of Kiev in World War Two.

By 1940 Simmon was a tall, robust, and physically strong man with the build of a rugby player. Unfortunately, his eyesight was very poor. When he was called to service in WWII, he was sent to the Auxiliary Military Pioneer Corps as a Private.

Latutin wanted desperately to confront the Nazis.  He was determined to apply for a commission for a fighting regiment.  He memorized the eye reading card test, passing the medical exam. He was sent for Officer training.

April 9, 1943, Simmon was first sent to the border with Abyssinia, commanding African troops who were engaged in trying to stop Arab slave traders transporting their human “cargo” from the Abyssinian border to the Cairo markets.

Posted to Mogadishu: December 1944, a munitions depot exploded, trapping two of his men inside.  Without hesitation, Latutin plunged into the burning building hauling out the still-living men. Latutin was severely injured. He died the next day, from horrific burns.

Latutin was commended to the King for the George Cross.

“The King has been graciously pleased to approve the posthumous award of the GEORGE CROSS in recognition of most conspicuous gallantry in carrying out hazardous work in a very brave manner to Captain Simmon Latutin 242974 Somalia Gendarmerie (Harrow Middlesex).”

“Disappointingly, none of the three local Camden newspapers mentioned one word of the award in 1946 or in 1947 even though they featured plenty of stories about locals being given MBE’s, MC’s and other decorations; one is left wondering at the motives for this.”

Dahl never repudiated or apologized for his anti-Semitism. His family did it for him after his death in 1990.

Mark Twain did not wait for his family to apologize for him.  A year after his anti-Semitic article came out, Twain publicly admitted he was wrong.

“When I published the above article in Harper’s Monthly,

fact that the Jew has a record as a soldier.

I have since seen the official statistics, and I find that he

furnished soldiers and high officers to the Revolution, the

represented in the armies and navies of both the North and

the South by 10 percent of his numerical strength –the same

percentage that was furnished by the Christian populations

of the two sections.

This large fact means more than it seems to mean; for it

means that the Jew’s patriotism was not merely level with

the Christian’s but overpassed it.”

December 16, 2021, President Biden awarded the Congressional Medal of Honor, posthumously, to the family of Sgt. Christopher Celiz.  Celiz was killed in action in Iraq saving the lives of his fellow soldiers.  Celiz was an American Jew.

Anti-Semitism is a destructive universal. Fighting it is a universal obligation.

It is easy to forget, the Jew is the world’s canary in the coal mine.

The Jewish American Society for Historic Preservation continues to do its part.

Jerry Klinger is the President of the Jewish American Society for Historic Preservation.