The Blogs
Nicole Czarnecki
Apply for a Blog
Advertisement
Please note that the posts on The Blogs are contributed by third parties. The opinions, facts and any media content in them are presented solely by the authors, and neither The Times of Israel nor its partners assume any responsibility for them. Please contact us in case of abuse. In case of abuse,
Report this post.

Thanksgiving Day came and went, and not without the memory that both sides of my family (with few exceptions) are willing to shirk our Jewish heritage (Dad’s side being fully Jewish and b’nei Anusim, and Mom’s having some Jewish heritage.). Ironically enough, both sides agree on this issue; and they have all opined variants of the following:

I’m sure that there are ones that I’ve missed. Meanwhile, let’s break down lie after lie, line by line.

In light of all this, the person who raised the counterpoint regarding the excuses originally fell back into his or her old thinking pattern: that is, “She’s not Jewish”. He or she replied that I’m not Jewish when a relative of mine brought up that I’m Nazarene/Messianic/a Jewish Christian. Then he or she self corrected and stated that he or she thinks that his child who is a Jewish Christian is “a little Anti Semitic” when he or she says “I’m not Jewish!”

In other words, the parent who thought of me as not Jewish for a minute believes that his or her Christian child is self hating when he or she self disassociates from his or her Jewishness. This parent, by the way, was raised in a Rabbinical denomination, married a gentile Catholic, and finds his or her own son or daughter to be self loathing for falling for the “Jews don’t believe in Jesus” argument .

Both sides have done a scarily-excellent job of propagating the “Jews don’t believe in Jesus” argument, by the way. The Anti-Semitic and Self-Loathing side does it to strip Christianity (Nazarene/Messianic Judaism) of its Jewishness and disassociate with Jews (and one need look no further than to Martin Luther and Nathanael Kapner). The Anti-Messianic side does it to try to not have to acknowledge that Jesus of Nazareth was a Jewish man who some (including myself) believe to be the Jewish Messiah. Sadly, well-meaning Philosemitic gentiles, well-meaning Non-Messianic Jews, and even some well-meaning Jewish Christians have been all too affected by the Anti Semites and the Anti Messianics; and among the well-meaning people are many of my relatives.

As for the concept of nations, “nations” does not mean “states”; just as “‘am” and “goyim” do not mean “‘eretz” or “medinat”. Nonetheless, “nations” and “states” are often taken for a synonymical pair, as are “assault” (“threat of harm”) and “battery” (“act of harm”). Also, being among all nations and among all families of the nations does not mean being a part of them:

Refer to the Peruvian-Brazillian tribe who is likely as gentile as African tribes who detest the Lemba Jews are. By the way, Tablet had a relevant quote; and I’ve said that finding neutral sources is hard, so I used a Tablet article. I should also add that one revisionist named Dr. Hilma Soodyall tried to do a study to prove that the Lemba aren’t Jewish after all. It didn’t work. People like me saw right through the study, just as people see right through the “Ashkenazi Jews are Khazars” studies.

Also, don’t kid yourself: especially Neuteri Karta, on the one hand, and Yad L’Achim, on the other hand, love people like “Dr.” Soodyall and “Dr.” Eran Elhaik. After all, “Drs.” Soodyall and Elhaik help keep HaMedinat Yisra’el, the “treif medina”, from doing well; and the Haredim want a Haredi Moshiach who will establish a Medinat Yehudit on Haredi terms.

The Haredim also love that they can keep many, Jews and gentiles alike, from having to acknowledge that Jews who don’t fit the traditional mold are nonetheless Jewish. As aforementioned, among the well-meaning people who have fallen for the Anti-Messianic and the Anti-Semitic argument are many of my relatives; and the Haredim love that my relatives and others won’t acknowledge who we are.

Meanwhile, this point from a Ha’Aretz editorial piece applies to that:

The sponsors of the bill, and Netanyahu as well, argue that it is needed since many today, more than even, are questioning the right of the Jews to their homeland. That is at best a paranoia-induced illusion and at worst a bare-faced lie. The Jewish state has never been so widely accepted and nearly universally recognized as it is today. Over 80 percent of the world’s nations have formal diplomatic relations with Israel and a significant proportion of those which don’t have quiet strategic and economic ties with the Jewish state. This week, one of those relationships on display was the silent coordination between Israel and Saudi Arabia on the sidelines of the Vienna P5+1 talks with Iran.

There are still those who dream of Israel’s elimination but even they don’t deny the fact that it is the Jewish state, it is clear in their anti-Semitism, though they half-heartedly try and hide it as anti-Zionism. True, there is a small fringe of whose who still think that Israel’s Jewishness can somehow be diluted and replaced with some anodyne non-identity, but the only place this disparate group of “radical” academics and quixotic activists have any semblance of relevance is in their own echo chambers on campuses and the Internet. And of course they exist in the fevered imaginations and rhetoric of Israeli politicians and Jewish Diaspora activists who are using the phantom threat of “delegitimization” as an excuse for either not moving forward in the diplomatic process, or for urging Israel to go full speed ahead lest we become international pariahs.

Incidentally and in conclusion, I wish all a Happy Thanksgiving, Pre-Hanukkah and Pre-Christmas Season, and a Shabbat of Peace and Blessedness.

PS This is one of my maternal Jewish ancestors: 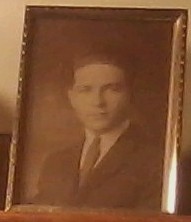 He’s my maternal grandma’s late dad. I don’t know when this picture of him was taken.

His dad was a son of Dorothea Lehr Pundt and a grandson of Betha Mueller, born into a Crypto-Jewish Lutheran family (the earliest Anusi of whom was Daniel Salomon Mueller, who added “Adolph” to his name. There was gentile admixture and perhaps other Anusi heritage; still Daniel Mueller was the earliest obvious one.).

About the Author
Born in the Diaspora in 1990, Nicole Czarnecki didn’t even know that she’s Jewish until about 2008. As a Jewish Christian and an aspiring olah with more of a history than she ever knew and hope for a future of which she can't even begin to dream, she aspires to help others learn from their histories and build hopeful futures for everyone whom aspires to pursue tzedek and tikkun ha’olam.
Comments