The Blogs
Naftali Schiff
Apply for a Blog
Advertisement
Please note that the posts on The Blogs are contributed by third parties. The opinions, facts and any media content in them are presented solely by the authors, and neither The Times of Israel nor its partners assume any responsibility for them. Please contact us in case of abuse. In case of abuse,
Report this post. 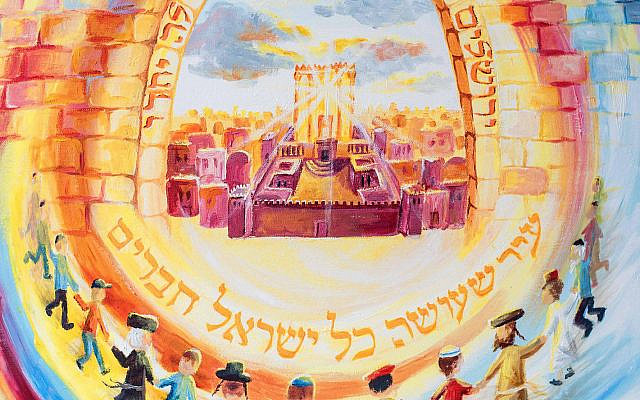 Am Yisrael, all of the Jewish People, holding hands around Jerusalem (click on image for the full view)

Let’s give Yom Yerushalayim back to the people. This week, we mark the annual celebration of the city that’s supposed to unite us, but it’s ironically become a sectarian occasion. The holiday and the city that it celebrates are increasingly associated with particular religious and political camps, while really, both should be rallying cries for unity.

After all, we’re the first generations in 2,000 years who can take for granted the ability to freely visit Jerusalem (coronavirus restrictions notwithstanding), drink of its unique ambiance, and witness the revival of Jewish life there.

And regardless of political vision for the future or religious ideology, most of us can surely agree we’re pleased that, on this day in 1967 according to the Hebrew calendar, the division of Jerusalem that kept Jewish people away from the focal point of our age-old dreams and aspirations came to an end.

So yes, we have much to celebrate this week. We may squabble and spar with each other over all sorts of topics, but can’t we please unite around Jerusalem? And as we do so, let’s  focus on why it’s such an anathema that Jerusalem so often divides us.

It’s a theme I’ve reflected on enormously whilst here in Jerusalem where I have spent much of the last two weeks in quarantine. I’m a British-born Israeli and was required to self-isolate upon arriving in Israel from London, in order to be with my mother who is unwell at Hadassah Medical Center.  Even though I wasn’t allowed to leave our home in the Old City until just a few days ago, and police visited daily to check that I remained indoors, I felt as always tremendously uplifted to just be here.  It’s not because of the sites (which I was prohibited from seeing), or even the people (whom I’ve been barred from meeting), but because of what the city palpably represents.

According to Jewish tradition, Jerusalem is the origin of Creation itself, the touch point between the spiritual and physical worlds, with man at its epicenter. As such, turning to face Jerusalem in prayer, thought and action, we are encouraged to constantly be checking in as to the meaning and purpose of our lives. In addition, Jerusalem reminds us how we have always been a people, despite or because of our differences. Rewind our history, and you’ll recall that we lived as different tribes, each with its own unique character, traits and passions and, in an ancient precursor to brand logos, emblems. And this is exactly why Jerusalem has always played such an important role.

It was our gathering place. The city fell under the jurisdiction of the Tribe of Benjamin, but operated as a city for all tribes, who headed there for some of the most meaningful moments of the year: the three pilgrimage festivals of Sukkot, Pesach, and Shavuot, the latter we will celebrate next week, as well as facing there three times a day in prayer.

Jerusalem received huge numbers of visitors, yet it wasn’t a “tourist city,” but rather a city where residents were custodians and welcomed the multitude to their home away from home. According to the Talmud, innkeepers weren’t allowed to charge a fee for receiving guests yet their doors were open to all.

Don’t expect this for your next Airbnb booking, but let’s take the message: Jerusalem, from its early days as a Jewish city, was envisioned as a place that unified different parts of our people. It was a city where residents from one tribe, with their set identity and culture, knew that every other tribe had a stake in the city and it’s ethos. The Book of Psalms describes the rebuilt city of Jerusalem as one that “connects all Jews together;” the Jerusalem Talmud (Bava Kamma 6a) explains that it is a city “that joins Israelites to one another in friendship.

And so it should be today. There have always been differences — yet the legacy of Jerusalem was always and must remain in part, its power to unify. The festivals which brought our ancestors to Jerusalem represented the moments in the year when they were shaken from their regular routines.

This reflects a profound strategy that is central to Jewish life: To focus on what’s most important, our tradition removes us from routine. It does so three times a day for prayer, once a week on Shabbat, and three times a year for festivals. On the latter occasions ,we not only changed our conduct, but also our location by heading to the Holy City.

And there, deeply ingrained into the identity of the city, were all the themes that help us to live better and be better — themes that are on many of our minds after weeks with time to think in isolation — like authenticity, being true to self, prioritizing what is important, and so on.

It’s interesting to imagine the scene in ancient Jerusalem at pilgrimage time. So many people descending together. A breeding ground for broigeses and rivalry, or a change for unity? What determines the direction that things take?

The possibility for unity is determined to a large extent by a very small variable, one which is entirely in our hands: Are we prepared to see the good in our fellow Jews and find common ground, or just to focus on the negative? In my last column I suggested for all of us, at this time when we joined forces to fight a virus, and are now in full swing of implementing a rapid exit strategy, to seize the sense of togetherness and unity and take practical steps to see the good in each other. Appreciating and celebrating the message of Jerusalem helps us along this road towards unity.

In a poignant analogy for today, the Talmud compares the world to an eye — the white is the ocean, the iris is the land mass, the pupil is Jerusalem, and the face in the pupil is the temple, the epicenter of the world. It’s a way of explaining the centrality of Jerusalem, but furthermore this imagery conveys a powerful message and a suggestion that Jerusalem enables us to see things as they should be. How so? When do we see a face in the pupil? When we look ourselves in the mirror or when we look our fellow in the eye. The message is clear — firstly be honest with yourself, then nurture the habit of looking your fellow in the eye. To do both, authenticity and integrity with self and other are key. Unity does not demand uniformity; diversity and difference are part and parcel of the Jerusalem to which we dreamed to return.