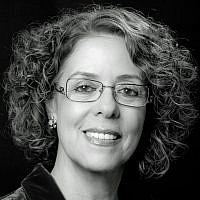 The Blogs
Rivka Carmi
Apply for a Blog
Please note that the posts on The Blogs are contributed by third parties. The opinions, facts and any media content in them are presented solely by the authors, and neither The Times of Israel nor its partners assume any responsibility for them. Please contact us in case of abuse. In case of abuse,
Report this post.

With the creation of the Max Steinberg Memorial Scholarship Endowment Fund, his family is honoring his life by acknowledging his choices.

Losing a child is every parent’s worst nightmare. Many people simply stop living as grief takes over as their defining emotion. But for some, personal tragedy offers an opportunity to do a greater good. Such is the case with Stuart and Evie Steinberg of California.

Their eldest son Max fell in battle last summer during Operation Protective Edge while serving as a member of the Israel Defense Forces. He had volunteered for one of Israel’s frontline combat units, Golani 13 Brigade, after moving to Israel on his own in 2012.

As parents, we do our best to protect our children. We worry about the day to day while working to instill in them the tools to grow into independent adults who will hopefully share our values and make the right choices.

But sometimes, that child makes choices we don’t always understand.
Max left his comfortable life in California and moved to Israel. He believed that to be truly Israeli, he would have to enlist in the Israel Defense Forces. At the height of their personal grief, only hours after being notified of his death, the Steinbergs put aside their own comfort and convenience and honored his decision. They agreed that he would be buried in Israel.

More than 30,000 Israelis attended the funeral, lining the streets of Jerusalem to honor his memory, as his story touched the national psyche in a very deep and real way. Israelis felt very alone this past summer, and here was someone who had made the ultimate sacrifice to become one of them. We embraced this young man who is now one of us forever, he and his family.

With their decision to create the Max Steinberg Memorial Scholarship Endowment Fund at Ben-Gurion University of the Negev, Stuart and Evie are strengthening these ties. They are memorializing Max in a way that will celebrate his life and his choices in perpetuity and will impact a widening circle of young people – an act that is truly worthy of admiration.

The Endowment Fund will provide scholarships to economically disadvantaged students at BGU in perpetuity. The scholarship gives top preference for Lone Soldiers who have immigrated to Israel on their own, with secondary preference to members of the Golani Brigade and finally to any student who served as a combat soldier. The more funds raised, the more students will benefit, ensuring that Max Steinberg’s spirit and love of Israel are never forgotten.

The Israeli Ministry of Defense recently recognized BGU for its exceptional support of students and staff members who do active reserve duty. Max Steinberg Memorial Scholarship Endowment Fund is one more way that we can show our appreciation to the students who have served our country, and continue to do so actively, often at the expense of their own studies.

In 1949, David Ben-Gurion wrote: “The enemy forces in the neighboring countries and in the world at large have not yet despaired of their scheme to annihilate Israel in its own land or at least to pare away its borders, and we do not yet know whether the recent war, which we fought in the Negev and which ended in victory for the IDF, is the last battle or not, and as long as we cannot be confident that we have won the last battle, let us not glory.”

Max’s memory stands testimony to the ongoing battle for Israel’s security, and together with his family’s generosity of spirit, represents all that is hopeful for a better future.
May his memory be a blessing.