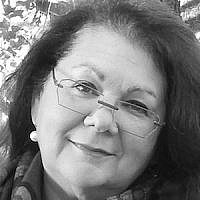 I was a small child living in the southern US on the day that Jerusalem was reunited in 1967, and I can remember my parents’, especially my mother’s, tension during the war, and overwhelming excitement and joy that day that Israeli soldiers fought their way through to the Kotel. I’d grown up on her stories of student days in early 1950s Jerusalem, sitting with friends, dangling her feet over a wall that offered a view of the Old City, that had been captured by Jordan in 1948. I still have an old reel-to-reel tape of the little voice of my late first husband, David, then a young child living in Jerusalem during his father’s sabbatical at Hebrew University, recording his impressions of being in the city—living on Rehov haPalmach—during the 6 Day War, and the day the city was reunited. Even for American Jewish children the excitement, the sense that this was a moment we would never forget, dominated our world.

I’d like to add to our celebrations of this 50th Yom Yerushalayim by sharing my illuminations of a celebration of the grand Second Temple city from Psalms. We read Psalm 99 every Friday night during Kabbalat Shabbat…and it is grand! 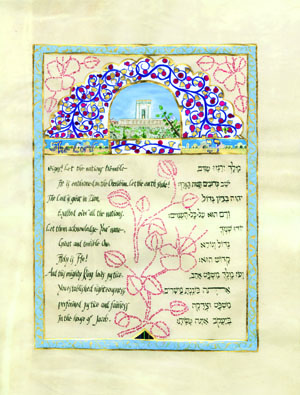 Psalm 99 i, from Kabbalat Shabbat: the Grand Unification

Since the 16th century, this psalm has been part of our welcoming of Shabbat. These are my illuminations from Kabbalat Shabbat: the Grand Unification. Let’s review the text.

He in enthroned on the Cherubim. Let the earth shake!

The Lord is great in Zion,

Exalted over all the nations.

Let them acknowledge Your name,
Great and terrible One.
Holy is He!
And this mighty king loves justice:
You established righteousness,
performed justice and fairness
In the house of Jacob.
Exalt the Lord our God,
Prostrate yourselves at His footstool.
Holy is He!
Moses and Aaron were among His priests,
Samuel among those who called upon His name:
They called upon the Lord, and He would answer them.
They observed His testimonies,
And the law that He gave to them.
O Lord, God: You answered them.
You were a forgiving God to them,
But took revenge for their misdeeds.
Exalt the Lord our God
Prostrate yourselves at His holy mountain,
For holy is the Lord our God.
(translation by Raymond P. Scheindlin, in Kabbalat Shabbat: the Grand Unification)

The psalmist celebrates Jerusalem, in particular, the Temple Mount—as the very seat of God’s immutable and unequaled grandeur, and justice, and law…and mercy, as well. The Temple is the direct inheritor of the sanctity of the cloud with which God led us in the desert, it is God’s dwelling on earth—we remember that the Kabbalistic sefirah, Shekhinah, “dwelling,” is indeed an emanation of God. 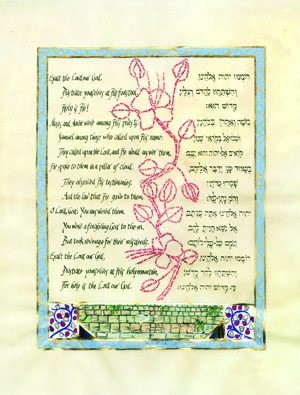 In studying the Kabbalat Shabbat liturgy, I noticed that each of its psalms focuses on experiencing the Creator’s glory using a different kind of sense—hearing different kinds of sound, different kinds of vision. In that context, Psalm 99 seems to evoke the wondrous sense of seeing the glory of Jerusalem.   And this is the sense that I attempted to capture in my paintings. In the first illumination we see an image of the glowing white and gold Second Temple—known as one of the wonders of the Roman world—atop the mountain, surrounded by vines of the golden bells and pomegranates that decorated the priestly robes. In the second painting above we have an image of the Western Wall, the Kotel, as it stands today. Those scrubby little plants springing out of the wall are the caper plants; in the Babylonian Talmud there’s a rather funny little passage that compares various plants and animals to qualities of Israel—the caper, which can survive being planted in the harshest, rockiest spots with scarce water and soil—like the chinks in this huge stone wall—the rabbis compare to Israel’s ability to thrive with only God’s unseen hand to support us. The micrographic vinework spreading through the paintings bears the verses of Judah Halevi’s beloved love song to Jerusalem, Tsion Halo Tishali, his Ode to Jerusalem.

Halevi’s love song is a lament for lost love, and although the Temple no longer stands, we can indeed gaze in awe at the beauty and power of our sacred, we can now celebrate reunited Jerusalem, in the words of Psalm 122, “Jerusalem built up, a city knit together” and forever our hearts reverberate with the psalmist’s words,

For the sake of my kin and friends,
I pray for your well-being;
for the sake of the house of the LORD our God,
I seek your good.”

Through June 15, 2017 Kabbalat Shabbat: the Grand Unification is available at a 20% discount. Please visit my distributor’s store, and enter promo code SPRING2017 during checkout. Full credits for translations and other notes are omitted in this post, but are included in the full hardback edition of Kabbalat Shabbat: the Grand Unification. My gratitude goes to Sharon and Steven Lieberman for supporting the publication of this book.  Other than quotations from other works, all materials herein Copyright © Debra Band 2017. All rights reserved.