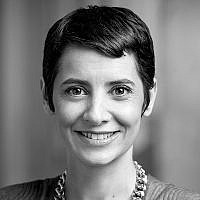 The Blogs
Inbal Arieli
Apply for a Blog
Advertisement
Please note that the posts on The Blogs are contributed by third parties. The opinions, facts and any media content in them are presented solely by the authors, and neither The Times of Israel nor its partners assume any responsibility for them. Please contact us in case of abuse. In case of abuse,
Report this post.

Forty-eight hours of stress in the streets of Tel Aviv, and the uncertainty of life in Israel has become even more certain.

“Mommy, do I have to go to school today? I’m afraid. What if the terrorist comes to our school?” Yarden, my 6-year-old asked me the other morning.

“Don’t worry, dear,” I answered, “you are safe at school. You will enjoy meeting your friends and talking to your teachers. And the guard at the entrance to school always makes sure that only parents enter.”

As crazy as it sounds, I do believe my kids are safe at school — although an armed terrorist was hiding somewhere in Tel Aviv for those 48 hours, after he attacked and murdered civilians on Friday afternoon in the center of Tel Aviv as they celebrated their friend’s birthday. And to make things even more worrying, the attacker’s mobile phone was found only 170 feet from our home in a quiet neighborhood of Tel Aviv, where he left it before he went to carry out his terrible plan.

One month ago, the world was caught off guard by the horrible series of terror attacks in Paris. Parisians were instructed to stay home, and the streets of the City of Lights were empty and dark.

Brussels — the capital of Belgium, home of the European Parliament — was practically shut down for five entire days, including the school system, public transportation and entertainment venues. The uncertainty the Belgian authorities faced — about the location, plans and next steps of the terrorists — led them to the conclusion that the price of shutting down the city for five days was a necessary cost to keep their population safe.

On a different corner of the planet, in Israel, people live in a routine of uncertainty.

During these past weeks, terrorist attacks, which occurred mostly in greater Jerusalem, spread to other locations in Israel, including Kiryat Gat in the south, Tel Aviv, Afula in the north and Raanana in the center of the country. Young lone terrorists have carried out the attacks. Assailants also included three Israeli Arabs, Palestinians staying in Israel illegally, two women and two children. Generally speaking, the terrorists have not been members of any established terrorist organization, and the current wave of terrorism has not been directed by any such organization. This has made the wave of attacks even more unpredictable.

So we wake up every morning, continue our day-to-day routine, knowing in the back of our minds that anything can happen, any time.

Terrorism is not designed specifically for mass killing of civilians. Intimidation and disrupting the normal order of life is a goal in itself. And the result could, as it did elsewhere in the world, empty the cafés and restaurants, paralyze the education system, neutralize the entertainment sites, the ability to commute and disrupt day-to-day life. But not in Israel.

Uncertainty has become our reality here in Israel. This has been our story for many years.

I believe that learning to cope with uncertainty and developing skills to adapt to changing circumstances is in the DNA of Israeli society. This is something our kids learn at an early age. How was I supposed to answer my 11-year-old when he asked me, one summer evening in 2014, if he could invite his classmates to our home? This was in the midst of weeks of incoming missiles fired towards Israeli cities, including Tel Aviv. I actually agreed, without hesitation. We have a security room, like most Israeli homes. So worst case, if there is an alarm, the kids would all join us there. And that is exactly what happened. A dozen of 11-year-old kids, two adults and a dog, all together in the security room of our home. We joked, sang, talked, while the sirens raged throughout the city.

So how can one stay sane in such an unstable, uncertain environment?

Hofstede’s cultural dimensions theory shows that Israel is very unusual in terms of what he calls its “uncertainty avoidance.” Uncertainty avoidance is defined as “a society’s tolerance for ambiguity,” in which people embrace or avert an event that is unexpected, unknown, or outside the status quo. According to Hofstede, Israel is among the stronger uncertainty avoidant countries. In these cultures there is an emotional need for rules — even if the rules never seem to work, for time is money, people have an inner urge to be busy and work hard, and security is an important element in individual motivation. Cultures with a high score on this dimension are often very expressive, something Israelis demonstrate by talking with their hands, gesticulating, and vocal aggressiveness.

The formal uncertainty avoidance demonstrated by the Hosftede theory, can be explained by the idea that in Israel, uncertainty is certain. It is actually our routine.

And how does it affect our children? What do they learn in coping with these situations?

Gan Gurim, a kindergarten in central Israel, is an example of how too-frequent emergencies look.

Not one Israeli child or teenager has escaped the experience of war, a reality that no doubt leaves a significant impression. However, the example of Gan Gurim manifests how the teacher chooses to calm the three-year-old kids while sirens are blaring and rockets are launched towards Israel. She asks them to lie on the floor “like turtles” and reads them a story in the calmest voice she can manage. She knows how important it is to guide them through these circumstances, which will not be the last for them.

In mid-December 2015, two weeks ago, a bomb threat shut down the Los Angeles school district and 650 thousand kids stayed home from school. According to NBC News, America’s two largest school districts received similar threatening emails but reacted in opposite ways: New York shrugged it off, while Los Angeles shut down its system. The different responses reflect starkly different attitudes to stress and threat.

By contrast, even during the peak of missile attacks in Israel, Israeli children walked to school every day. In areas where the schools were not properly prepared with security rooms, other regions came to their assistance. In the city of Ashdod for example, a few miles south of Tel Aviv, the tension and fear of rockets led to the cancellation of summer camps. Many families were then invited to stay with other families in the north of the country, just as they had been hosted by the southern families during the Second Lebanon War (2006). These types of arrangements are usually spontaneous and managed through social media by citizens who simply want to help each other.

This past Friday evening, only a few hours after the violent terror attack, social media in Israel was full with messages like this one: “The party tonight at the Ouzan Bar will take place as usual, starting at 11:00 PM. Due to the situation, entrance fee is only 20 shekels. Hope to see you! The terror will not win!”

Since Friday afternoon, until this very moment, the armed terrorist has not been found. However, the police forces, the mayor of Tel Aviv and the prime minister of Israel, they all had the same message to the residents of Tel Aviv: Stay alert. But keep your life routine, including going out.

Every child is able to understand this message — that no matter how bad it is — we must continue to operate normally. Uncertainty is not a comfortable situation to manage, but it’s different when it is your routine. Dealing with uncertainty is therefore a critical capability when you grow and live in Israel.

Given all this stress, emergency and uncertainty, you might be surprised to learn that out of 41 countries, Israel was ranked fourth “Best Place Worldwide to Raise a Family”, by the 2015 InterNations Family Life Index. France was ranked 8. The US, 25. Saudi Arabia last.

Children are capable of adapting to changes better than we adults. One who grows up in an environment where the threat to life is constant can, with the right guidance, learn how not to be afraid of sudden changes, and, moreover, specialize in creating change and adapting to it. Such a child will most likely learn to acquire new skills and navigate life between different rules, adjusting to uncertainty, adapting and building life in accordance to change.

Dr. Alon Gratch, an Israeli psychologist living in New York says, “In this sense, being Israeli is similar to an endless boot camp towards the global information age, which is actually designed to make the idea of change your best friend. That is one reason why almost every young Israeli you meet in New York is an entrepreneur-to-be, a serial entrepreneur or an entrepreneur who already failed.”

In our small country, whose size is almost the same of the state of New Jersey, most days are somehow surprising. For those who live here, uncertainty is the routine.

It is no wonder that children who grow up in a constant state of uncertainty — and are given the guidance and tools to deal with this situation — can develop such important skills for dealing with uncertainty in all aspects of their lives.

Praying for safer days and a calm new year.

About the Author
Inbal Arieli is a serial entrepreneur, and an Israeli tech influencer, featured as one of the 100 Most Influential people in Israeli hi-tech and as one of the 100-tech-business-women-speakers in the world. For the past 20 years, Inbal took a leading role in the flourishing Israeli hi-tech sector, including founding a series of programs for innovators, serving in executive positions in high-tech companies and as senior adviser to Start-Up Nation Central. Inbal also started companies of her own, and is co-CEO of Synthesis, providing leadership assessment and agile people development with methodologies derived from the unique experiences of elite military unit leaders, Harvard Business School coaching experts, and executive search industry pioneers. Inbal lectures widely on the Israeli innovation and start-up ecosystem to business and government leaders around the world. Among her most popular lectures is “The Roots of Entrepreneurship,” which analyzes how Israeli culture breeds entrepreneurship at a very young age.
Comments