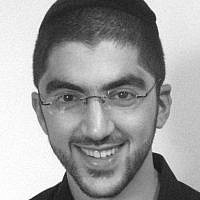 The Blogs
Nissim Franco
Apply for a Blog
Advertisement
Please note that the posts on The Blogs are contributed by third parties. The opinions, facts and any media content in them are presented solely by the authors, and neither The Times of Israel nor its partners assume any responsibility for them. Please contact us in case of abuse. In case of abuse,
Report this post.


The following paragraph is a different interpretation as to what the first stanza is referring to.

(The goat is the firstborn that Yaakov bought from Esav with bread and lentils, which correlates to “my father bought for two coins”, and then gave it over to Yosef. In fact, the small numerical value of Bechora is the same as the numerical value of Gedi [goat]. Subsequently, when the brothers sold Yosef, he was 17, which is the same numerical value as Gedi. That is what it means when it says the cat ate the goat.)

All the good that Hashem bestows upon us is simply inherited from our forefathers. Were it not for Yitzhak’s blessing to Yaakov, everything would have gone to Esav and we would have been left with nothing. What was the source of this blessing exactly? According to the Gemara it was the two goats that Yaakov brought to Yitzhak on Erev Pesach to receive the blessing. As the sages teach, they are ‘good for you and for your children’, meaning one is good in that he would receive the blessings and the other is good for his children that they will bring two Se’irim to atone for their sins on Yom Kippur. The Gr”a explains that the animals that Yaakov brought and the Se’irim actually worked the same. Just like the two Se’irim were brought for atonement and to appease the Satan, so too the two goats that Yaakov brought were to receive the blessings and to appease the Satan.

Yaakov then proceeded to give these blessings over to Yosef. Now one may question, didn’t he bless all of his children? The Gr”a points out that regarding each of the other tribes, the Torah does not use the word “blessing”. Only with regards to Yosef do we see it actually described as blessings.

However, the brothers got jealous, which is the nature of a cat, and sold Yosef, who represents the goat, in order so that they could inherit his blessings.

After Yosef’s ultimate passing, Pharaoh, who is compared to a dog, put the tribes into slavery as punishment for the sale of Yosef.

The sages write that when Moshe arrived to save the Jewish people and remove Pharaoh from power, he hit Pharaoh as if he were a dog with his famous staff.

Along came some water and extinguished the fire

Along came an ox and drank the water

But there is always hope. Mashiach ben Yosef, will come and save us from this 2,000-year exile. In fact, it is very fitting since Yosef is also referred to as an ox.

Along came the angel of death and killed the slaughterer

About the Author
Nissim graduated from the Berman Hebrew Academy in Rockville, MD, and then spent two years at Yeshivat Lev HaTorah in Ramat Beit Shemesh. He is currently studying accounting at Yeshiva University and plans to make Aliyah upon completing of his degree.
Comments