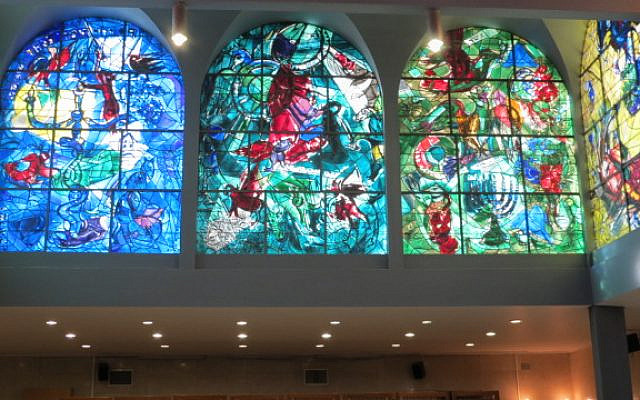 "This is my modest gift to the Jewish people who have always dreamt of biblical love, friendship and of peace among all peoples. This is my gift to that people which lived here thousands of years ago among the other Semitic people." Marc Chagall, February1962. Chagall's Windows at Hadassah Hospital, Jerusalem, Israel. (Photo is from Wikimedia)

Her bravery awed me to stand for love against fidelity to tradition. Their story was scandalous.

We went to look out Marc Chagall’s windows. As we stared at them, she spoke with worry about her love for a Palestinian Muslim disrupting her Jewish world back in the states. She left. I stayed, sitting there all afternoon staring out the windows, hoping to find a prophecy. I have no memory of what I discovered and later wrote about. Not only that, but I don’t even recall the woman’s name with whom I sat. I remember we were in a class together at Hebrew University.

I hadn’t considered that moment for decades. But when hearing about Chagall’s distance from the man who rescued him from Nazi murder, I thought of her on the day we stared at Chagall’s windows. Since that time, I have loved Chagall’s work. Who doesn’t? It thus pained me when reading how distant Chagall was from his rescuer, who stood in the way of Nazism, to rescue brilliant European Jews. Did Chagall lack the courage to stay close to the man responsible for rescuing him from the murderous hands of Nazis?

Soon after looking through Chagall’s windows, I stared at lists of people identified as Righteous Among the Nations at Yad Vashem. I did not know Chagall’s rescuer was and is on that list. Varian Fry. Right after the Nazis invaded France, Fry went to Europe and started & ran a rescue operation in Vichy, France, the Emergency Rescue Committee (ERC).

Varian Fry is credited with saving two to four thousand Jewish lives, rescuing many of Europe’s greatest Jewish writers, artists and philosophers, e.g., Hannah Arendt, Marcel Duchamp, Marc Chagall, Walter Max Ernst, Arthur Koestler, Leon Feuchtwanger, Max Ophüls, Anna Seghers, Claude Lévi-Strauss, and so many other writers, artists, and philosophers. Fry said in 1945 that “I could not remain idle as long as I had any chances at all of saving even a few [from Nazism’s] intended victims.”

Fry was Harvard educated with a degree in classics. He was also the first of five Americans Israel recognized as Righteous Among the Nations. I didn’t know of him until reading Dara Horn’s overwhelming, brilliant book, “People Love Dead Jews,” where she notes that Fry’s prophetic understanding of both Hitler and Stalin compelled him to try to stand in their way.

Horn wonders why so little time is spent studying people like Varian Fry, those who rescued Jews from Nazi Europe. Is there something they may teach us about standing against evil? Clearly Fry is an example of bravery, a rare one. The Righteous Among the Nations is a frighteningly small group, not at all reassuring about human goodness.

So, why did Chagall and others Horn mentions abandon Fry after the Holocaust, refusing to return his calls asking to help him raise awareness? Horn asks if it’s because Fry symbolizes their, e.g., Chagall’s, most vulnerable moment, true helplessness in the face of evil whereas Fry at the same time was on a prophetic high saving genius from hell. There’s no answer.

Today, we remember the Nazi horror, reminding us to fight tyranny while making blessed memories of those murdered, never forgetting what should have been done while fighting to do now what they did not do for those Jews. I look to Varian Fry as a role model for now, a hero at a time we have so few, just like the few that helped during his days rescuing Jews.

It’s shocking how small and inconsequential the number is of those who saved Jews. This makes Fry more important as a model for action. Fry believed the Nazis would destroy the creative forces of Western civilization. He thus went to rescue some of them. And he did, e.g., Marc Chagall.

Today, the Holocaust is the most well-known genocide. A major reason for this is that most genocidal leaders don’t write everything down for later generations to research; Hitler’s sycophants did while murdering one third of the world’s Jewish people. One out of three.

Those who continued on as Jews never stopped living or creating, as evidenced by a young Jewish woman attending the Hebrew University who was Jewishly worried that her love for a Palestinian Muslim may lock her out of the Jewish house where we both saw Judaisms through Chagall’s windows. I wonder if she still looks out of them. I know this much: because of Varian Fry, she still has the choice to show up and look out Chagall’s windows.

May Varian Fry’s memory always be for a blessing.