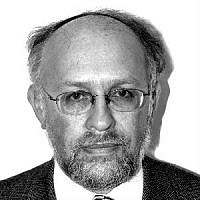 The Blogs
Yoel Cohen
Apply for a Blog
Advertisement
Please note that the posts on The Blogs are contributed by third parties. The opinions, facts and any media content in them are presented solely by the authors, and neither The Times of Israel nor its partners assume any responsibility for them. Please contact us in case of abuse. In case of abuse,
Report this post.

When the editor of a newspaper steps down and a replacement made, it does not always draw the attention it should. Whereas reporters with bylines are recognized by readers, this is not the case with the editor. Yet the editor and his or her sub-editors have an influence not generally recognized by their audience in selecting what is printed and the prominence news receives, whether on the front page or the back page. In the academic jargon, they act as “gatekeepers” — and even influence agenda setting.

So the appointment this month of Noa Landau as editor to the Haaretz English edition — the third in the edition’s history — should not go unrecognized. The English edition began in 1997 by its founding editor, David Landau (no relative), after he persuaded Haaretz publisher Amos Schocken, that if Schocken employs some 200 journalists to produce its Hebrew edition, why not employ a slim staff of translators and publish an abbreviated version of the Hebrew edition in English. It clearly boosted the international standing of Israel’s No 1 quality daily. And, the insertion of the New York Times international edition — which has similar arrangements with English language dailies in over 30 foreign countries — added to the appeal for in the English edition.

The new Haaretz English edition challenged the monopoly which the Jerusalem Post had enjoyed. Indeed, whereas with the exception of the Russian language press which serves the Russian olim, Israel’s foreign language press — which dotted the newspaper market in the early years of the country’s independence — have all but disappeared as the next generation read the Hebrew press. So it is surprising that that there are today not only one English newspaper but two.

In the spirit of the adage that competition is healthy, Haaretz’s English edition created an inertia inside the Post for self-improvement.  David Horovitz’s period as editor of the Post, for example, was characterized by a sharpened focus on the news. Notwithstanding limited resources, the Post’s purchase by Maariv’s owners created a stronger financial base. With the Post being a paper written by Anglo-Saxon journalists, with their pulse closely on this community. Haaretz’s English paper — a paper written by Israelis for Israelis has had a difficult uphill battle to break into the Post’s faithful readership.

A  close look shows that Haaretz  covers Jewish culture widely and related questions like synagogue and state matters (the Kotel crisis being just one) even more than its Hebrew elder paper. Some readers stayed with the Post if only because they did not identify with Haaretz’s liberal, progressive stance on the Israeli-Palestinian question. To be true, Haaretz’s “other” audience are Palestinians who seek a mirror to follow events inside Israel.

Indeed, the outgoing editor of Haaretz’s English edition, Charlotte Halle, a British emigrant (like David Landau),  moved  up through  the edition’s staff from her days on the Anglo-Saxon page of the paper — an attempt by Haaretz to provide the “Anglo-angle,” but which has since all but closed — epitomized the need to reflect its audience. So, the decision of Schocken to parachute in an Israeli as its new editor — Noa Landau herself previously the key post in the Hebrew edition of News Editor — appears on the face of it self-destructive.

But the new editor may have the mettle which Halle lacked to strengthen the paper’s waning position because Halle’s eight-year editorship was characterized by “containment.”  It is instructive to compare the Hebrew edition with the English edition. For example,

While for the same price of NIS 22.50, the weekend edition of the Haaretz Hebrew edition includes a 20-page daily newspaper, with news features, and a were produced glossy upmarket weekly magazine, the Marker weekly (also 20 pages) with features about the economy, a Books supplement, as well as a separate  Culture and Literary supplement, and a quality entertainments guide, the English reader of Haaretz  receives, in addition to the New York Times insert, a much abbreviated news section, and the Entertainments guide. Gone is the weekly magazine. Also gone, was a fine produced monthly literary supplement by David Green. Layout of the paper and page make-up was predictable, almost staid. A comparison between the daily editions reveals a similar conclusion. Almost invisible is the paper’s coverage of economics news in contrast to the Hebrew paper which has an entire Marker daily supplement of its own.

To Halle’s credit credit, Haaretz’s English edition proved itself at key periods like festival editions to the events like the visit of the Pope to the Holyland, where the paper clearly outshone the entire Israeli press including Haaretz’s Hebrew edition. Also notable during Halle editorship was the expansion of the on-line edition.

Given limited space, Landau should dropping non-news material like daily historical feature and a weekly section on the Bible parsha in favour of a newspaper’s true goal of following the news.

Surprisingly, a comparison of the coverage of Peres’ death and funeral, in the English and Hebrew editions revealed great similarity.  However, the erev Rosh Hashanah edition is instructive, of the gap between the two editions. The Hebrew edition comprised a fat 26-page news and feature section, a 48-page arts and entertainment supplement, an interesting 40-page special issue of the Marker focusing on the Haredim and the economy, and an eight-page literary supplement — all in contrast (for the same price) of a slim 12-page English language newspaper (excluding the New York Times insert).

Material in the Hebrew edition’s weekend Friday paper regularly appears only on Sundays — as if the weekend for these readers is on Sunday — in contrast to the rest of the Israeli population which has fat supplements in their Friday weekend papers. Indeed, the new editor would do well to restore the confidence of the paper’s reader by resuscitating the weekly magazine — a steamship in Israeli newspaper journalism.

So the key question is whether Noa Landau has the mettle to combat the Haaretz management, and its publisher to invest more resources or not?

Professor Yoel Cohen is on the faculty of the School of Communication, Ariel University