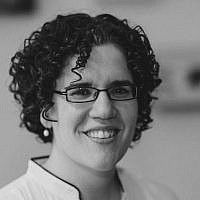 The Blogs
Gali Cooks
Apply for a Blog
Please note that the posts on The Blogs are contributed by third parties. The opinions, facts and any media content in them are presented solely by the authors, and neither The Times of Israel nor its partners assume any responsibility for them. Please contact us in case of abuse. In case of abuse,
Report this post.

Scene: a CEO of a major Jewish organization, planning retirement, informs her board that unless they hire the successor she wants, she will withhold all assistance with the transition.

Scene: an organization’s (female) executive VP is approached by the board to ask if she’s willing to be considered as the next CEO. But she expresses doubts about her ability to lead.

Scene: a major Jewish Federation hires a dynamic young leader to take over for a legendary outgoing CEO. Now the incoming CEO is faced with the seemingly impossible task of living up to someone else’s reputation.

Scenarios like these have played out countless times during the last few years, as many Jewish organizations have undergone CEO transitions. Many more will do so in the near future. In fact, these leadership transitions, and the inherent need for great leaders that they present, is why my organization, Leading Edge, was established in 2014. Our founders understood that organizations in the Jewish nonprofit sector on the cusp of long-predicted, generational leadership changes would face myriad challenges, obstacles, and opportunities during those transitions.

All of the scenes above come from a series of case studies profiling CEO transitions at six major Jewish organizations across the country, which Leading Edge recently commissioned. The case studies offer a candid, personal look at the inner workings of CEO transition processes, which we hope will provide valuable lessons and guidance to CEOs, board members, funders, and other key stakeholders for the organizations that power Jewish communal life. These recent leadership transitions at American Jewish World Service (AJWS), Bend the Arc, Combined Jewish Philanthropies (CJP), a JCC in the Midwest, Spertus Institute for Jewish Learning and Leadership, and Tufts Hillel articulate clearly the real-world, on-the-ground issues that organizations grapple with amidst a transition.

These organizations represent a broad array of our Jewish community, representing varied missions and serving different audiences. But when we dig deeper than these differences, we can see similarities in how all Jewish organizations can think about leadership transitions and enable future leaders to succeed.

For example, these case studies show how important it is for boards and search committees to approach the transition process with intentionality, thoughtfulness, and purpose. The story of AJWS chronicles the tensions that can arise between an outgoing CEO and a board, in this instance led then by Kathleen Levin: “Ruth couldn’t understand why we couldn’t just blindly accept her choice [of successor], but from a governance perspective, you really need to be careful,” Levin says. “[The selection] can’t be done by one or two board members, it can’t be done by the outgoing CEO. It has to be done by the full board, and every board member has to buy-in, has to feel heard, and has to have the time to deliberate.”

Gender and generational differences are also factors, affecting both individual approaches to leadership and organizational culture change. Bend the Arc’s CEO transition to Stosh Cotler, for example, shows how women approach a job opportunity with a different mindset than their male counterparts: “A breakthrough moment came when [Cotler] spoke with a male CEO who was moving to a larger organization that required experience handling real estate finances, an area of expertise that he didn’t have. Cotler asked him about whether that worried him. He replied, ‘I’ll learn.’” Cotler then says, “I realized I didn’t think this way. But there’s no reason that I shouldn’t have the same optimistic view of my ability to learn and grow.” Removing such obstacles from more candidates from marginalized groups will be increasingly important for ensuring that our leadership represents the full spectrum of people in our community.

We also learned that a board’s role in an effective leadership transition should not end once the new CEO has officially been hired. The search committee convened by Combined Jewish Philanthropies, for example, helped incoming CEO Marc Baker transition into his role  by creating “what they called Baker’s transition cabinet, a group of a dozen or so strategic advisers such as former board chairs, search committee members, and other longtime stakeholders. The group’s raison d’être was to assist Baker with his cultural inculcation. It met with Baker in person several times and discussed topics such as the community landscape and historical context, advice on relationship-building inside and outside of the organization, and personal goal setting for Baker.”

The full series has much more to teach—from how organizations cope with their sense of loss of the outgoing CEO to how they use these transitional moments to clarify their vision and reinvigorate their sense of purpose.

It’s important to share these stories now because we’re living in a time of great opportunity and great risk for the Jewish nonprofit sector. An overwhelming majority of the field’s leadership positions will turn over in the next decade and the leaders chosen today will set the direction for our community for many years to come. Let’s lean into this opportunity and position our incoming leaders to thrive. After all, the social fabric of Jewish life will be in their hands.

The case study series was funded by the Harry & Jeanette Weinberg Foundation and the Jim Joseph Foundation.

About the Author
Gali Cooks is president and CEO of Leading Edge, which works to influence, inspire, and enable dramatic change in attracting, developing, and retaining top talent for Jewish organizations by creating a forum for the sector to address talent and culture issues.
Comments