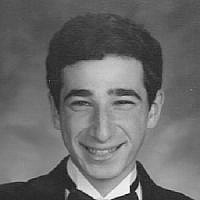 The Blogs
Jacob Kaplan-Lipkin
Apply for a Blog
Please note that the posts on The Blogs are contributed by third parties. The opinions, facts and any media content in them are presented solely by the authors, and neither The Times of Israel nor its partners assume any responsibility for them. Please contact us in case of abuse. In case of abuse,
Report this post.

As a society, we each, on an individual level, have the capacity to define the culture in which we live. Through the Marcus Social Justice Fellowship, a program of the North Peninsula Teen Collective, our cohort of twelve North Peninsula high schoolers has had the opportunity to engage with our community and discover where its deepest issues lie. After reaching a consensus of addressing the challenge of rape culture, we set out to turn bystanders into upstanders and end the normalization of rape. Throughout the process, we were guided by the three pillars of the Marcus Fellowship: 1) imagine, 2) inspire, and 3) impact.

Imagine: We began by engaging our friends and peers around the same topic that brought us together initially: social justice. Through conversations with many of our friends, we opened up meaningful dialogues about the problems that we see as the biggest ones facing our community today. Moreover, we discussed which ones we have the possibility of making an immediate impact on and specifically, what we’d be willing to take the time to impact. Afterward, we each presented on an issue we felt passionate about: gender inequality, mental illness, genocide prevention, immigration, rape culture, and gun violence. The passion in the room was palpable as each Fellow shared what hit closest to home for him/her. We held an intellectual and democratic debate over the pro’s and con’s of each issue and the possible impact we could have on each. What most attracted us to the issue of rape culture was our ability to change it, as well as its pertinence to us as teens. Rape culture, the phenomenon of rape being pervasive, normalized, and trivialized in society and media, is something we all see on a regular basis. As said by one Marcus Fellow, “We decide our culture, and this is a culture we can impact”.

Inspire: While many of us teenagers have had previous experience with programming, event planning, and social action , the Marcus Fellowship introduced us to design thinking, a concept that was fairly new to us all. As we learned and discussed about the methodology of the “problem-solving” protocol that makes up design thinking, each fellow was encouraged to reflect on what problem or issue they would first attack through the design thinking process. We interviewed adults and teens with whom we are close, asking them to pinpoint how rape culture can be most effectively addressed. We crafted “How Might We…?” statements to aid us in forming a concrete mission. Our guiding statements, “how might we turn bystanders into upstanders?” and “how might we stop the normalization of rape?” have helped us to construct a plan rooted in a firm objective. Making use of this, we went full force into creating a social media campaign, using the hashtag #NotMyCulture to express our ambition to wipe out jokes, casual comments, and misguided blame concerning rape and sexual assault. As teens and adults alike are increasingly using social media as a platform for communication, movement, and teaching, we aim to target our internet friends in our own community and across the globe so as to maximize the attention drawn to this crucial issue.

As teens, rape culture is something that’s unfortunately and uncomfortably close to home. Mainstream music and popular media tend to marginalize rape and its victims by condoning assault. But this does not have to be our culture. Given the peer nature of this issue, we are also blessed with an immense capacity to make a change. Further, we all saw the issue as a Jewish one, following the principles of shalom bayit. We were inspired by the powerful injunction: lo ta’amod al dam re’echa – you shall not stand idly by the blood of your neighbor. And that’s why it’s not just the Marcus Fellows, but all of society who can – who need – to not be bystanders, but upstanders.

Impact: We need your help; the 12 of us cannot do it alone. You can begin by watching our video. Share it on social media with the hashtag #NotMyCulture, and learn more here. Every 2 minutes, another person becomes a victim of rape.

In just 2 minutes, there are so many things we can do to combat rape culture. Sign this petition urging Congress to pass the International Violence Against Women Act. When you hear a rape joke, speak up against it, reminding people that rape isn’t funny. Call your local radio station and tell them to stop playing sexist music that promotes rape culture. Question the people on the street whom you hear catcalling – move them to think about what they are actually saying. Participate in DoSomething.org’s Project Shutdown, “fixing” ads that sexualize women.

Together, we can eliminate rape from our culture.

This post was co-authored by Danielle Hamer, Jacob Kaplan-Lipkin, and Dana Wilks.

About the Author
Jacob Kaplan-Lipkin interns for the North Peninsula Teen Collective, a non-profit aiming to increase access to Jewish Life for Peninsula teens. He also served on Regional Board for BBYO. He is graduating this June from Kehillah Jewish High School in Palo Alto, where he served as President of Israel Club and was proud to be a leading AIPAC High School Activist. Jacob is starting at Stanford University in the fall.
Related Topics
Related Posts
Comments