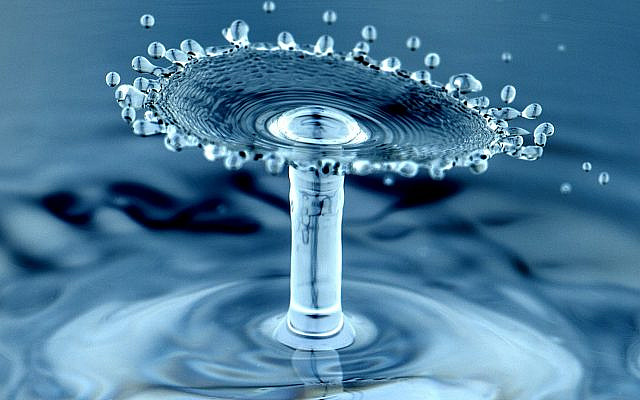 The miracle of Chanukah is celebrated for eight days because the number eight represents something higher than defined and understood nature—higher than nicely defined particles and projections. The blessings we make over the lighting of the candles contain 13 words corresponding to the 13 attributes of mercy that are higher than logic. The name Chanukah includes the word “Chain” which means grace, which is also higher than understanding.

On Chanukah, we can connect with and bring alive in our natural lives those miraculous aspects of God that belong to the randomness of all possibilities.

The greatest paradox in quantum physics is the wave-particle duality. But is it that hard to understand?

We look at clouds and have no problem accepting the drops of rain that fall and emanate from them. We have emotional, ethereal feelings in our hearts, and our logic puts them in boxes and tells us what they mean.

Rain can still turn back into vapor, and logic can hold emotions and cause them.

This is very simplified, and I am aware of that.

We know about the electromagnetic field, one of the four forces of energy, because of its effects in and on the universe, which our eyes can only see a small portion. Some animals can see even broader expanses of the spectrum, and some machines can sense in many different ways even more of this field.

Incidentally, no one has ever seen or really “knows” what this “field” of energy is. It is only from its effects (because something must come from something else) that we theorize and accept that there has to be this potential for energy that gives birth to what humans conveniently describe as the electromagnetic “field”.

After all of the recent scientific discoveries, we appreciate that even if I don’t see infrared or ultraviolet light because my eyes were not designed to register that frequency range, the fact that it exists is undeniable. If the observer, i.e., my eyes, could be broadened in its capability, it would “collapse” even more of this electrical wave.

We also know that while some types of machines can “feel” other segments of the electromagnetic spectrum, only a fool would insist on personally experiencing those ranges otherwise, he would not accept their existence.

“There is no mind that can grasp God except through the experience of the heart.”

The mind that places parameters and boundaries is like the particle in quantum physics, and the experience of emotions is like the wave with a less defined and broader expanse of identity and the possibility for many kinds of logical derivatives.

God, in His essential being, is certainly not a “particle” that can be defined as anything that fits nicely within the parameters of any human mind.

No computer machine can calculate the movements of around 100 electrons in a caffeine molecule. How can one dare think we can get close to God’s mind?

We are proud to say that we know how atoms and subatomic matter move, down to how quarks spin, but meteorologists are often wrong when they try to predict the weather for the next day or two. How can anyone with a straight face claim to know with any degree of certainty what happened 13.8 billion years ago? Or even stranger, some suggest we can question and doubt the mechanisms and workings of the mind of God. That is absurd.

God in His infinity is an indeterminate wave that can never be pinned down in an exact position or definition. God is the ultimate field that gives rise to and shows itself through quantum fluctuations. All the particles come from God. All the particles are God!

Because God is at the root of everything and is everything that cannot be defined, and nature and its rules are only one small piece of the grand picture that God, in His kindness, allows us to personally experience miracles and unexpected supernatural events happen regularly.

The rules of science are merely statistical averages. At the same time, at the atomic and certainly subatomic level, we say it is all random, i.e., humans cannot figure it out. Even more so, it is inherently unpredictable and random.

It is simple logic that nothing — can give rise to anything because where or what would it come from?

Scientists wanted us to believe the Uni(multi?)verse was always stable, but then they said there had to be a singularity from which everything emerged. Now, they say that the singularity came from a time before the big bang, which may have been the big bang’s precursor, and that this time may have been around forever!

Absolute nothing is absolutely nothing. There is nothing from which anything or something can come from it.

So, where did God come from?

That is what makes Him God: He is NOT dependent on anything for His existence. He is beyond our human comprehension; he incorporates everything we can imagine since, out of Him, everything emanates, and He lacks absolutely nothing. He has no beginning that He is dependent on or end that would limit his capabilities. His existence is beyond space and time in any imaginable way.

God, who is infinitely more than perfect and has infinite wisdom and mercy, the source for everything — is beyond anything we humans can ever imagine. He has always existed, decided to limit an expression of His existence, and conveyed that energy potential in the first wavelike emanation.

This wavelike expression is the potential for everything that exists in the universe. However, like God, this expanse lacked specificity, serious definition, and boundaries, so God applied a limiting constricting force to this wavelike energy, which carried in it the potential for the entire universe, and now there was space/mass and the beginning of the first moment of actual time from which the physical universe was created.

There is a curtain between us and the Quantum world, and behind it, there is no solid reality. Scientists can’t see what happened before the big bang because, once again, there’s a curtain hiding what’s there. There is also a stronger barrier between God, who can’t be grasped, and this first expression of wavelike potential energy marked the beginning of physical existence.

Quantum physics has shown that quarks, electrons, and photons follow the same model. This is because these are the most fundamental parts of physical reality and mimic precisely the way God Almighty created the universe. There is the wavelike behavior of some form of energy and then the power to restrict and constrict that becomes the particle, at least on the observable exterior levels of the wavelike energy.

Life begins in the heart, passes through the mind’s logic, and inspires emotions.

The Maccabees were fighting for our belief in a transcendent God. “Who is like you among the strong, oh God.” While the Greeks needed everything to make sense and be understood scientifically, the Maccabees awoke the awareness in the wave—the randomness of all possibilities, which we connect with through faith and trust.

God is not just the reason 26 precisely designed fundamental constants make our universe what it is. God, whose numerical value is 26, IS the fabric of this entire universe.

When we look at the light of the Chanukah candles flickering in the electromagnetic field and listen (absorb) to their message, the powerful memories, lessons, and actual miraculous occurrences of the first miracle come back to us loud and clear.

Be sure to ignite your Chanukah flame with the powerful blessings, and may the miracles of Chanukah seep into your life.