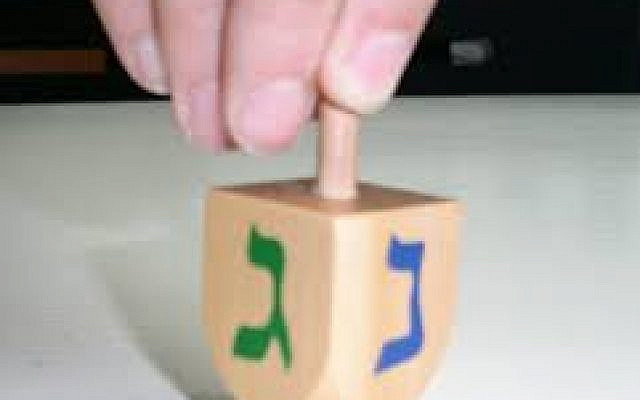 Long before the fidget spinner became the world’s favorite pastime, Jewish children played with spinning tops on the holiday of Chanuka. Such a spinning device is known in Yiddish as a dreidel, while in Modern Hebrew it is called a sevivon. The word sevivon is derived from the Hebrew saviv (“around”), which appears in the Bible. There is, however, another Hebrew word which also means around: haikef. The circumference of a circle is known as its haikef (which is, of course, “Pi” times the diameter), and the traditional circuits around the bimah (almmamar, or “table” upon which the Torah Scroll is read) that are performed during Succot and on Simchat Torah are likewise known as hakafot. So what is the difference between saviv and haifek, and are there any other words which also mean “around”?

Rabbi Meir Leibush Weiser (1809-1879), better known as the Malbim, explains that haikef denotes a complete circle, while saviv is not necessarily a complete circuit (though, he notes the phrase saviv saviv indicates a full circle).

Rabbi Shlomo Pappenheim of Breslau (1740-1814) also explains that the word saviv does not denote a complete circle, but simply means going around the center in a circular way, which could include a semi-circle or even just an arc. When the Jews circumvented traversing Philistine land by traveling around them (Ex. 13:18), it is described as a sivuv, even though they obviously did not make a full circle. This is because any round-about movement whose purpose may be to avoid a certain point (conceptually, “the center of the circle”) can be called a sivuv. The term saviv can also be used metaphorically, such as when one speaks in a round-about way without saying one’s point explicitly (II Sam. 14:20).

Nonetheless, Rabbi Pappenheim writes that saviv or saviv-related words usually refer to complete circles. To this effect, the Hebrew word siv refers to the bast of a palm tree, which is a fibrous material that surrounds the branches. Similarly, a drunkard is called a soveh (see Deut. 21:20, Proverbs 23:20, and Isa. 56:12) because he circulates around the taverns and bars (to taste different types of intoxicating beverages, to avoid being recognized by the bartenders, or because he uses up his credit in one shop and must drink elsewhere). An elderly gentleman is called a sav (Job 15:10) or a “grandfather” — saba — because he is nearing the completion of the circle of his lifecycle.

By contrast, the word haikef always refers to a full circuit. The seven circuits around the bimah (mentioned above) are called hakafot (or hakafah in singular) because they ought to be complete circuits. By contrast, the word for a spinner is sevivon because it need not necessarily make any full circles but might stop spinning in the middle of rotating without completing the last circle. Interestingly, Rabbi Pappenheim writes that a frozen or congealed substance is described as kafah/kafui, which is related to the word haikef because it is completely enclosed within the framework of its current state and cannot change shape as easily as a liquid can do so.

As the Targumim imply and Radak confirms, the Aramaic equivalent to the Hebrew root-word saviv is sachor, and sachor-related words appear in the Bible in the general meaning of round: a socheirah (mentioned in Ps. 91:4) is a type of round shield, and a merchant is called a socher because he travels around trying to sell his merchandise.

Another Hebrew root word related to circles is afef. We say in Hallel, “The pains of death encircled (afefuni) me… and I would call out in the name of G-d, ‘Please G-d, save my soul’” (Ps. 116:3-4). Malbim explains that the encircling denoted by afef always has a negative connotation. Regarding its etymology, Malbim explains that afef is related to the Hebrew word peah “corner” (in plural peyot) because it denotes enveloping someone or something from all possible corners.

Rabbi Yom Tov Lipmann Heller (1578-1654) writes that the original meaning of the word chag (“holiday”) is “circle”, which conjures the circles of dance which people enjoy on holidays (Sefer Ha’Aruch and Radak to I Sam. 30:16 offer similar understandings). For this reason, he explains, of all the holidays called a chag in the Torah (i.e., Pesach, Shavout, and Succot), the Mishnah consistently uses the term chag to refer to Succot in particular, because that is the holiday which is the most associated with happiness (see Deut. 16:15), and, thus, with dancing. Rabbi Yaakov Tzvi Mecklenburg (1785-1865) slightly disagrees with this when he writes that the word chag for “holiday” conjures the celebratory gait with which celebrants would walk on their thrice-yearly pilgrimages to Jerusalem. (Chanuka is never called a chag, and for that reason, the customary greeting on Chanuka is not “Chag Sameach” — “Happy Holiday” — but is something along the lines of the Yiddish expression: A Lichtege Chanuka, “An Illuminating Chanuka”).

Relatedly, Radak writes that chug is something that orbits around another body, like a planet. Malbim explains that chug or machug denotes a circle with a focus on the center of the circle. And, as we mentioned in an earlier essay, the word chagorah refers to a “belt” because it encircles a person’s body.

Rabbi Wolf Heidenheim (1757-1832) writes that because the letters CHET and AYIN are sometimes interchangeable, the word chag is the same as the word ag, which means circle. Thus, ugah is a circular food (e.g., a cake), agil refers to an earring, and when the Mishnah (Ta’anit 3:4) relates the story of Choni HaMe’agel (Onias the Circlemaker), it says that he was ag ugah (which basically means that he circumscribed himself within a drawn circle).