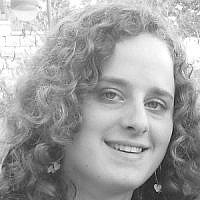 The Blogs
Nehama Weiss
Apply for a Blog
Advertisement
Please note that the posts on The Blogs are contributed by third parties. The opinions, facts and any media content in them are presented solely by the authors, and neither The Times of Israel nor its partners assume any responsibility for them. Please contact us in case of abuse. In case of abuse,
Report this post.

In this week’s sedra/parasha מקץ Jacob says to the brothers ‘May G-d Almighty give you mercy…’ it is strange that he says it in this way. Wouldn’t it have been better to say ‘May G-d be merciful to you’? Jacob’s words here were more than just a prayer, they were there to teach the brothers that if they wanted to recieve mercy from the Egyptian ruler (Josef) then they must 1st be compassionate themselves. They must 1st make a step themselves then they would see the benefit with others. (from living each week, Rabbi Twersky)

I think this idea of working on yourself or starting of the actions comes a lot within chanuka. Not necessarily in the way of character traits but simply in actions itself. The macabees had to 1st start of the battle even though the chances looked small and only then did Hashem preform the miracle that they would win. So to with the oil, 1st they had to take the initiative and light the 1st day and then did Hashem make the miracle and the oil lasted throughout. This shows us that if we want ‘miracles’ 1st we must start the process.

May we all have the strength to start our own small ‘miracles’.

About the Author
Nehama is originally from London. At 19 years old she has made aliyah and is now studying ulpan on kibbutz Sde Eliyahu.
Related Topics
Related Posts
Comments