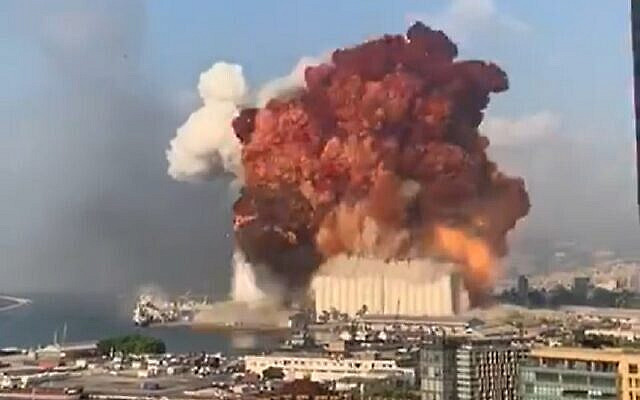 This morning, my friend Sheri Oz, whose opinions I value, posted a compelling argument against Israel’s offer to send aid to Lebanon in the wake of this week’s horrific explosion:

Let the government take the funds they would have diverted to help Hizbullastan and use it, instead, to help the 26% of our population that is currently unemployed because of Corona and to help the businesses that crashed because of Corona…. Charity begins at home — and then it is not really charity; it is family pulling together to overcome all odds.

I found myself applauding her last sentence, even while having some serious misgivings about the rest. One could argue that it is not Israel’s duty to save the world, that we have enough problems to deal with here in Israel before we run off to the aid of our enemies. Wouldn’t the money be better spent at home? “Charity begins at home,” after all!

Well yes, and no. Very rarely is “worrying about our welfare” vs. “helping others” a true dilemma. If it were that simple, the choice would be easy: our own come first! But in fact, in most cases this is a false dichotomy, for a number of reasons.

Every nation projects something of itself out into the world. Some take pride in their sports teams in international competitions. For Israel, it is our medical know-how and our search-and-rescue teams, which are some of the best in the world. By putting its hard-won expertise to use to help others, Israel brings something good out of all the years of war and terror. These are fields in which Israel has a chance to make a difference.

But this is not a one-way exchange: these skills must be honed during times of relative peace in order to be trained and ready at the sudden onset of war. Both military and medical teams need constant practice in working efficiently and effectively together in difficult and demanding conditions. The kind of coordination required to bring off a high-pressure humanitarian operation does not just happen; it is the result of frequent — often quite expensive — training exercises.

This is one reason why nations send troops to peace-keeping missions around the world. It is also a reason nations deploy search-and-rescue missions and field hospitals to disaster zones far from home; while there is certainly a humanitarian element to this, the benefits in terms of home-front preparedness cannot be denied. This is one instance where “altruism” is really another word for “pragmatism.”

Israel has other national strengths, and one of them is the social cohesion and compassion of its people. Here too, it isn’t a zero-sum game — either we help our own or we help others. It is true that when resources are scarce, we naturally provide for our own first. But once basic needs are met, can we really argue against saving the life of another human being?

We are not taking food out of the mouths of our own people by sending trained personnel abroad. In reality, the costs of these operations are usually quite small in comparison to, let’s say, the salaries of Knesset members or unnecessary government ministers. So no, it is not at all the case that the money saved on sending medical personnel or medicines or food to Lebanon would help re-invigorate the economy. In fact, one can argue that providing employment — and salaries — to emergency personnel, many of whom are currently unemployed reservists, is a good way to help our own.

Still, it can be argued that we are technically at war with Lebanon. Why should we help our sworn enemies?

Here, too, the issue is not black and white. While the Lebanese regime is very much under the thumb of Iran, it is the Lebanese people who are the true victims. Hezbollah has done to its own people what it would have wanted to do to us. In offering Israeli aid, even knowing it will almost certainly be refused, we are doing our part to help reinforce the message: Israel is not your real enemy; Hezbollah and Iran are.

Nor can we argue that the people we save may go on to fight against us in future wars. According to Jewish ethics, we cannot judge someone who is innocent at the moment on the basis of what that person might do in some projected future. The midrash on God’s saving the young Yishma’el comes to mind:

The angels said, “His descendants will kill many of the Jewish people. Let him die now.”  God asked, “Is he a tzaddik, a righteous person now, or an evildoer?” “A tzaddik,” they answered. “So that is how I will judge him: ‘Ba’asher hu sham — where he is now.’”  (Bereishit Rabbah 53:14)

People are not judged by their future actions, but only by who they are at the given moment. At the moment, a child buried under the rubble is not a future enemy; he or she is a child in need of rescue.

Generosity to others is not a given; like military and medical skills, concern for others must be taught and practiced. If the plight of Lebanese citizens impels some to give who otherwise would never reach into their pockets at all, so much the better. Once inculcated, the habit of giving is there to be drawn upon at need.

In helping others, whether against natural disasters, war, or human negligence, we are also strengthening our own cohesion. As social animals, we naturally take care of the others in our clan. The danger is that we come to see those who are “not clan” as less than human. We’ve seen the sort of polarization this breeds. By enlarging the circle of those to whom we extend help, we acknowledge not only their humanity, but our own as well. Yes, “charity begins at home,” but it doesn’t end there!

There is no law of “conservation of kindness,” such that helping the “other” detracts from helping our own. In fact, helping others indirectly leads us to be more giving — and more forgiving — to our own.

But of course, all this is not the only reason for offering help, even to people whose governments are officially at war with us. Another reason is that it amplifies something in ourselves — something that at the moment is seriously in need of bolstering. By helping others, we enhance what I can only call “national self-worth,” and this in turn bolsters our sense that our nation is worth defending.

A demoralized and shamed population has much less chance of surviving the kinds of dangers we face in our region, both from within and from without. By being both capable and willing to render aid to others, we give ourselves that much more reason to survive, above and beyond pure animal necessity. Holding onto humanity is never a wasted exercise, even when facing desperate odds — perhaps especially when facing desperate odds.