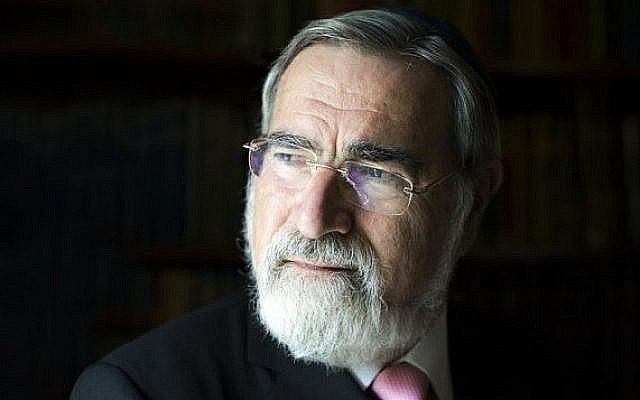 The following stories, to me, capture the essence of Rabbi Sacks. Rabbi Sacks was asked to meet the Pope, but the only time a meeting was possible was on Yom Kippur eve. If there is any day a rabbi is busy, it is Erev Yom Kippur. The need to prepare speeches, sit with family, and ensure everything is set up for services, is huge. Above that is the need to eat, and in his case, he also needed to get back from Rome to London. As the meeting carried on, Rabbi Sacks shared, he felt the urge to depart and tell the Pope: “Gut Yontif, Pontif.”

The mixture of humor, sophistication, attending to communal needs, being internationally respected while remaining deeply grounded in the Jewish community, Jewish humor, and knowing where he will be returning to.

On another occasion, Rabbi Sacks was walking with an Israeli security detail attached to him, and told the young man: “you take care of the Bitachon (Hebrew for security), and I will take care of the Bitochen (Yiddish for trust in God).” The ability to capture the Yiddish, the Israeli, his role, and to be personable with his security detail speak to some of who he was.

Finally, and perhaps most famously, Rabbi Sacks was once on vacation in Eilat, where he went on a glass bottom boat to the red sea, where Saudi Arabia, Jordan, and Israel meet. The captain came over and said: “Are you from England? I was just there.”

“Everything so beautiful; the gardens, the people, the city of London, and much more.” The captain then pointed at the barren mountains and said with pride: “Aval Zeh Shelanu,” but this is ours. “

Rabbi Sacks, like that captain, knew how to appreciate the beauty of other cultures and nations. But he also knew “Aval Zeh Shelanu”; he knew what is ours.

It is very appropriate to note that speaking of this week’s Parsha, Rabbi Sacks contrasts Abraham and Noach. We know the rabbis take aim at Noah for being the only righteous in his generation and not bringing the people of his generation back to God. We know they praise Abraham for bringing the people of his generation to God. What is the true difference between these two? Rabbi Sacks argues it is grief that sets them apart. Noah comes out of the ark, seeing a desolate world, plants a vineyard, and gets drunk. Abraham just experienced the death of his beloved Sarah, who died following his near killing of their shared child. Abraham’s first move in his grief? To buy land to secure the future of his children in the land and to marry off his son Isaac. Abraham is always looking to the future. While the Torah refers only to Noah as a Tzadik, it is what they do as they look forward that makes all the difference.

Rabbi Sacks saw how the heart and soul of our faith is veshinanatam levanecha–teaching the youth–and began producing a weekly Parsha sheet for Jewish children and Shabbat table discussions. Rabbi Sacks saw a world in which too many people were turning their backs on the Jewish people and decided to go out and make friends for the Jewish people.

The death of Rabbi Sacks is an incalculable loss to the Jewish people.

Yet looking at his own words and overcoming our own grief, we must look forward the way Rabbi Sacks would.

What is it that we can do to build a better world the way he has? Over his tenure as Chief Rabbi of England, enrolment in Jewish days school went up from 25% to 75%. While American Jewish identification struggled with decline, Rabbi Sacks inspired his own community to be proud of their Judaism. We are each tasked with this sacred task of making Jews prouder of us and carrying on his legacy of the building. Rabbi Sacks calls on us to follow in the footsteps of Abraham, to look around us, see the destruction, grieve, and see what we can do to build.