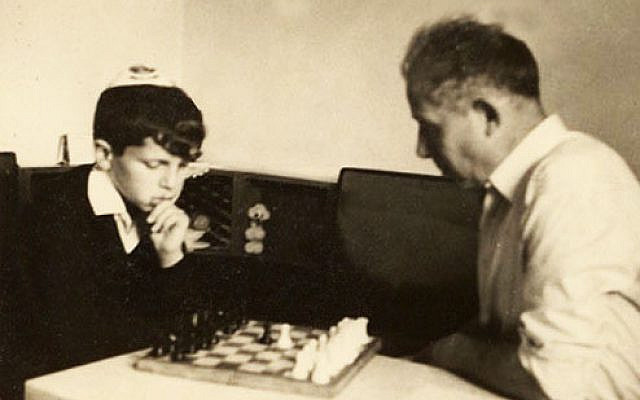 Paul Morphy, José Raul, Samuel Reshevsky, Awonder Liang and Larry Kaufman were only children, but their youth didn’t hold them back. They couldn’t drink, drive a car or buy a pack of cigarettes. They were unable to travel unless escorted by an adult, but it didn’t matter. They were treated as equals to men four times their age, because genius knows no age limits.  Though I have no resemblance to their talent and have never studied chess, the game has been in my blood from an early age.

Chess was my game, not because I came from a communist country, where chess was a rite of passage. Neither was it the fact that, in an impoverished upbringing with no toys to play with, a child might still find a discarded chess board. Rather, chess is special to me because of the time I spent playing the game with my father.

I loved my father dearly, and still miss having him in my life. I long for his company, but not because he played ball with me or took me to Disneyworld. Such activities didn’t exist in my universe. My Abba, as I called him during our 27 years together, lived in a world of self-sacrifice. Being a Jewish soldier in the Soviet army during the Second World War did not protect him from Stalin’s rabid anti-Semitism of the 1950s. He gave everything to save us from that graveyard, and after my mother died when I was 10 years old, and my brother was 6, we ran away and never looked back.

Abba was much older than most fathers of such young age children. It was the atrocities of War that created gaps in people’s biography. Having lost the middle years of his life to the War, his nature was one of kindness and truth, and I could feel the value of life through his wise smiling eyes. He never said, “No!” When I asked for a shiny new bicycle, he’d smile, wait a bit — like a tightrope walker anticipating his next step, then turn to me and say: “You know what — we’ll buy two of them!” Of course, we’d both end up laughing, knowing we couldn’t afford even the handlebars. Then, we’d end up settling for a game of chess and a cup of tea — the remedy for our poverty. And play we did!

By the time I was a teenager, although I’d beaten my father at chess many times, it was my brother who advanced to play in chess tournaments. Alas, the game was not about the outcome; it became our circle of life. Abba was the most content person I knew and he taught me much, but, personally, we had little to share. My interest in school, sports or girls didn’t give us a lot to talk about. But he trusted me, and I knew better than to disappoint him. He was an artisan master carpenter-turned maintenance man, and whenever he’d come home late from his job, we’d sit down to play. I’d bring him a glass of chai, and I’d look at his tired, beautiful soul as it dissolved the space between us. Finally, I’d see him nod off, having given the day all that he had.

These memories — and the magical feeling of holding a piece of history in the palm of my hand — are what the game of chess will always mean to me. Children may dream of great things, yet they cannot drive a fast car, order a martini or shoot a gun, but when I held a rook, a bishop or a queen (especially the queen), I held something genuine; just like the great ones, Lasker, Kasparov, Karpov, and Fischer, have often held in their hands. Not a child’s toy version of a queen – but the real one. And such a direct connection would pave the road for even an ordinary player like myself to enter the grand universe with the assurance that I belong.

Ultimately, what chess gave me, besides the warm reminder of my father’s love, is the belief in myself. When I’d look at the chessboard, contemplating my next move, I knew it was right there – between the squares and pieces spread across the board! I just had to open my mind and see it waiting for me – patiently. The perfect move would inevitably jiggle my strained brain cells and grab hold of my resolve. That feeling never left me – and whenever I felt stuck or was in a dead-end situation, I’d remember I only had to open my eyes and study the situation and eventually I would see it clearly.  Once I’d done so, I could remember my father’s proud smile — even when he’d have to lay down his king in defeat. Such was the game of chess for me.

But it didn’t last!

Professional chess tournaments, known as the Chess Olympiad, were as popular as the Olympic games. They were televised, and their grandmasters were celebrities. Backgammon has never commanded such reverence. It has tournaments and champions, but the game is relegated to luck and chance, despite its 5,000-year history. I suspect this is not only due to its origins in the Levant, but mainly because chess fits our dogma of authority and incontrovertible truths: “Be a good boy! Man up! Don’t answer back! Work hard and you’ll succeed! Eat your vegetables and you’ll grow up taller!” But as the new generation broke from these outdated beliefs, so has chess lost its luster.

Chess is a lengthy game which places demands on our time and intellect. Eventually, I taught the game to my sons, trying to emulate my father’s lessons to me. I have passed the baton, and we had our moments, bonding around the game and the demands it made on us. But, for them, chess did not come to offer an escape. They had every indulgence available to 21st century boys in middleclass America. Chess was too serious a commitment, and so I was able to offer them another kind of game, with rules that engage the left half of our brain; a game I learned during my army service.

Growing up in the Middle East, we played backgammon during many long days and nights, while stuck in the desert and battered by dry sand dunes and the punishing sun. What distinguishes this game, besides the perfect dance between players’ skills and the luck in the roll of dice, is the tradition of accompanying the game with humor and various forms of deprecating wit. But for me, backgammon offered an antidote to the otherwise rigid chess game. Besides the quiet and long discipline chess necessitates, the idea of one mistake deciding if I lose or win, can be quite intimidating. Not the case in Backgammon. A chess grandmaster may go undefeated for a long time. Yet rather than rely on memorizing a century-span of games and march within the linear logic of anticipating five moves ahead, backgammon relies on probability and the ability to harness it to one’s advantage. What is the chance my opponent will have a roll that will give him the advantage, at least until the next turn? One can win or lose any one game, but the overall win is from the accumulative aggregate of wins and losses.

In teaching my sons to play backgammon, I introduced them to the essential principle of risk vs. reward, where one can change the course of a game, by taking more risks – if one is behind, but limit risks when ahead. Almost 60 years after my father taught me to play chess, I alternate – playing both games with my sons, but definitely, more backgammon. It takes less time, we can be loud, laugh and enjoy its organic free form, fit for our times, resembling life itself.