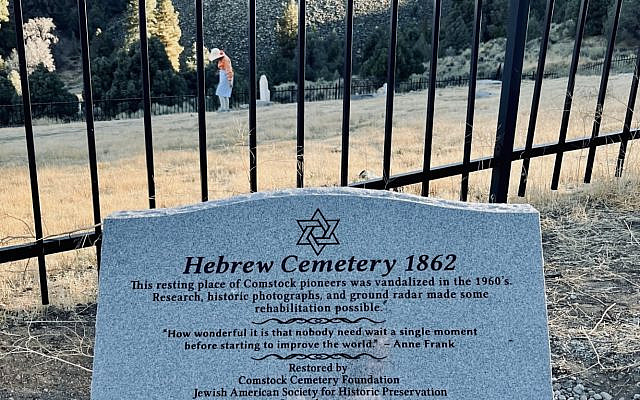 The discovery of silver in 1859, the famed Comstock Lode, high up in the desert landscaped mountains, 6,000 feet up, in present-day Story County, Nevada, transformed a one-man tent into a mining boom town of 25,000 within a matter of 15 years. They named it Virginia City, V.C. for short. Over four hundred Jews flooded into V.C.

Anyone with a pick, a shovel, and ten square feet of claim to dig straight down could become overnight millionaires. Some did.  Most never did.

“To call the place dreary, desolate, uncomfortable, and wicked is a good deal, but to call it God-forsaken is a good deal more, and in a tolerably large experience of this world’s wonders, we never found a place better deserving of the title than Virginia City.”

The beloved American humorist, Mark Twain, began his career in Virginia City when he became editor of the local paper, the Territorial Enterprise. He was desperate for a job, any job.

“Necessity is the mother of ‘taking chances.’  I do not doubt that if, at that time, I had been offered a salary to translate the Talmud from the original Hebrew, I would have accepted – albeit, with diffidence and some misgivings – and thrown as much variety into it as I could for the money.”   Mark Twain –

Albert Michelson grew up in Virginia City.  His father was a merchant.  They were religious Jews.   Michelson grew up and attend the U.S. Naval Academy. He established himself internationally as a renowned physicist after calculating the speed of light.  Michelson became the first American to be awarded the Nobel Prize in Physics.

Adolph Sutro imagined the impossible, engineered the impossible, and dug one of mining’s wonders of the world, constructing a drainage and access tunnel under Mount Davidson, four miles long. The Sutro Tunnel drained the flooding waters of the mines above in the Comstock Lode, for a fee. He was a Jew who could find no opportunity in Germany because he was a Jew.  In Virginia City, no one cared if he was a Jew.  They only cared about what he could do.

Sutro moved to San Francisco.  He was elected mayor. Sutro was the first Jewish mayor of a major American city, ever.

In a flash, it was gone.  The silver played out, and the miners and the Jews moved on.  By the 1950s, barely 350 people populated the hillsides of the largely ghost town of Virginia City.

In 1959, David Dortort (David Solomon Katz) created the second most popular T.V. Western series in American Media history– Bonanza.  It was the story of the Cartwright ranching family, a father, and his four sons, who lived near Lake Tahoe.  The Cartwrights visited V.C. frequently.  Bonanza lasted fourteen seasons. Millions upon millions of Americans tuned in.

Bonanza starred Tribal Member Lorne Greene (Lyon Himan Green) as the father, Ben Cartwright. Michael Landon (Eugene Maurice Orowitz), also a Tribal Member, played “Little Joe.” “Little Joe” was the very handsome “baby” of the Cartwright clan. He was beloved by his fans and swooned over by the ladies.

Bonanza transformed Virginia City into a tourist mecca of the Old West.  It didn’t hurt none that V.C. was designated a National Historic District by the National Park Service in 1961. Large parts of the city, then and today, look like the 1880s – business is business.

Today V.C. is home to about 800 permanent residents.  Over a million tourists annually journey up the frightening, winding, cliffhanging, sidewinding Oy Gevalt, road from Reno to V.C. for shows, events, happenings, Camel racing, Out House Races, Western food festivals, motorcycle, car rallies and more.  One of the most popular places to visit is Virginia City’s extraordinary Boot Hill cemetery called the Silver Terrace.

The singular cemetery is divided into sections, Catholic, Protestant, the Odd Fellows, and more. Volunteer representatives from each interested group come together as one to protect and watch over the sacred grounds together. The Cemetery is meticulously watched over and maintained by the Comstock Cemetery Foundation.

The Jews, too, created their own cemetery.  It is not part of the Silver Terrace Cemetery complex. It is sited in the valley below … 24 Jews are buried there. Their graves were largely lost, and vandalized.

“The reason people stole from the graveyard was because it looked like crap.”  If those responsible for watching over the resting places of their own did not care, why should desecrators, vandalizers, care? For antisemites, it was more than destruction, it was the open opportunity to express hate. 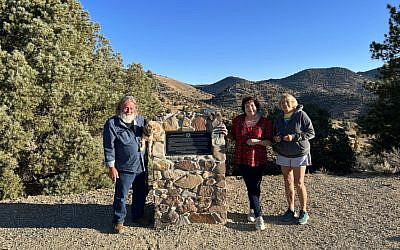 2015 – the Jewish American Society for Historic Preservation worked with Comstock Cemetery Foundation (CCF) to place a prominently placed interpretive pillar near the entrance to the Silver Terrace Cemetery.  The CCF wanted as many people as possible to read about the Jews of V.C. and their resting place. They wrote the text.

“The Jewish cemetery is located a few miles north of where you stand. It was the norm for organizations to have separate cemeteries. However, the commonalities of the Comstock population are of more significance than separatism. Like their neighbors, the Jewish immigrants were attracted by financial opportunities, they experienced high infant mortality, contributed to local economy and government, and viewed their cemetery as a societal obligation.

In the early 1860s, the B’nai B’rith Lodge 52, a Jewish fraternal group, was established and in all probability was responsible for the Jewish cemetery. A local newspaper of the times notes, “…this is a very handsome plat of ground, nicely cleaned off and substantially fenced…” Adella Adler and Aaron Korn, both children were the first burials.

In the mid-1960s a hate crime left the cemetery with one marker out of twenty-four interments. In 2002 the Comstock Cemetery Foundation fenced the property and the two Reno synagogues re-dedicated the site.

The Jewish cemetery stands today as simultaneously a reminder of American Western diversity, and a disgrace upon those with no tolerance for that diversity.”

2021, Candace again reached out to JASHP for help. She was frustrated and troubled.  She explained they had managed to put up a fence around the Jewish cemetery.  They wanted to find, mark and restore with dignity as many of the gravesites as would be possible to dignified memory.  There were no Jewish members of the CCF.  The Jews were entitled to memory.  The destruction of the Jewish cemetery was felt as a deep shameful stain on Virginia City.

JASHP partnered with the CCF and funded the entire project.  Hundreds of hours of work, research, even using ground penetrating radar, negotiating with the Federal Bureau of Land Management, which controls the land today, successfully managed to identify twelve of the lost gravesites. Twelve graves were successfully identified and restored, each marked with carved black footstones securely footed, giving them back their memory. 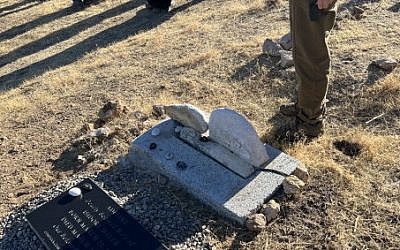 October 2, late in the afternoon, a few score locals gathered, along with representatives from the two Reno synagogues, as history, legitimacy, and honor were restored to the Jews resting in the high mountains.  I spoke with sincere appreciation about what the Comstock Cemetery Foundation and the Virginia City community had done.  They did not have to do it.  The cemetery was not theirs.  But it was theirs, it was all of ours together as Americans in common.  Hate, bigotry, and ignorance had no place on the frontier then or today.

The interred whose gravesites we were able to restore were identified.  Short bios about their lives were read as though they were selective readings at a synagogue service. 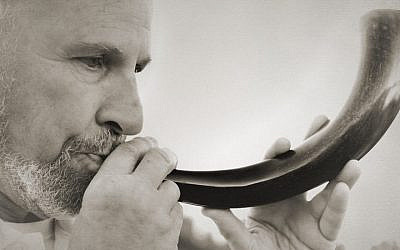 At the conclusion of the program, I blew the shofar. The sounds resonated along the valley, sounds that had not been heard in 130 years.

The Comstock Cemetery Foundation and the people of Virginia City had completed an act of Chesed Shel Emet, Righteous actions without seeking any reward or expecting anything in return. They did not know the term.

None of them were Jewish, but all of them had completed one of the highest Mitzvahs that could ever be done in Jewish life.

“This resting place of Comstock Pioneers was vandalized in the 1960s. Research, historic photographs, and ground radar made some rehabilitation possible. “How wonderful it is that nobody need wait a single moment before starting to improve the world.” Anne Frank Restored by Comstock Cemetery Foundation Jewish American Society for Historic Preservation September 2022

About the Author
Jerry is the president and founder of the Jewish American Society for Historic Preservation, www.JASHP.org. He is the son of Survivors of Buchenwald and Bergen Belsen. He is a former Yeshivah student and served with the IDF in the Sinai. He is the author of over 100 articles in publications ranging from the Jerusalem Post to the Prairie Connection to the San Diego Jewish World. Jerry is frequently interviewed on T.V. and on Radio about the American Jewish experience. The Jewish American Society for Historic Preservation has completed projects in 40 US. States and in 6 countries. Over 7,000,000 people annually benefit from one of JASHP's efforts. JASHP has completed 17 projects in and for Israel. November 30, 2021, Jerusalem: JASHP completed the first-ever historical memorial to the 850,000 Jews driven from Arab lands and Iran with the birth of the Jewish State.