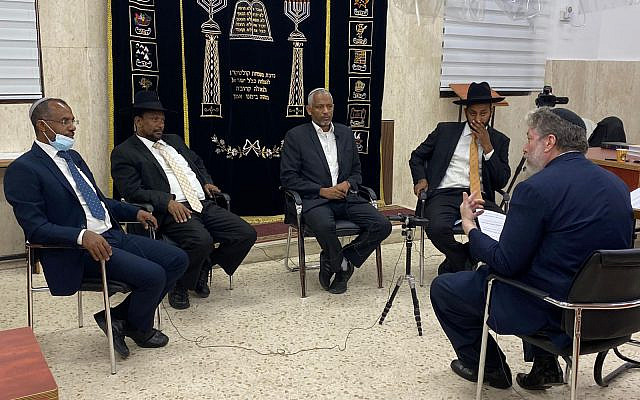 Ethiopian leaders meet with Rabbi Tovia Singer to make a statement regarding the targeting of their communities by missionaries. Courtesy.

The arrival of Bishop Glenn Plummer in Israel, who represents the Church of God In Christ (COGIC), has caused Israelis to ask many questions about the American preacher: Who is he and what are his intentions? How did he gain entry to Israel with a residence visa during a pandemic when the borders are sealed shut?

The couple’s move to Israel was proudly announced in a video “The Plummer’s Are Moving To Israel”, which was a send-away episode on their YouTube Channel with prominent members of their church wishing them well on their ‘assignment’.

“It was faith that caused you to go to Israel in the first place – to begin a work, and to lift up a witness for the Lord Jesus Christ” says Bishop Jerry Macklin in the video.

Plummer proudly explained to viewers that he possesses a unique connection to Ethiopian Jewish communities.

In an interview with Eagles’ Wings representative Stephen Jenks, Bishop Plummer shockingly states that: “The fact that we are of African descent is very significant as we go to Israel, because we’re talking about Ethiopians”. Plummer describes that because they share the same skin color “the Ethiopian community becomes a great door of connection”.

In a widely published video recently, a leader in the Ethiopian community – Avraham Yordai, was the first to speak out publicly, calling for action from the rabbinate and members of the Israeli government.

“There are organizations and individuals who want to entice members of the community, to convert them to Christianity, to missionize them. They are very active in our community. However, what is different now is that these activities are being done in an official manner! Israeli leaders know and facilitate Plummer’s activities. The State and its institutions know that this is being done and there is no opposition on their part. This is very serious… very serious.” said Yordai.

“We came to Israel from Ethiopia, unified and strong in our Judaism. We were excited and expected to find angels in the state, good and religious people living in Jerusalem – THE HOLY LAND! Yet we arrive and find missionaries acting in our midst here. Christians that are operating with permission from the state! I do not see either that the Chief Rabbinate is going out of its way to uproot this, and I do not know why. They have the authority, they are paid to act on such matters, but they are not doing anything in order to uproot it or to deport these people.” continues Yordai.

“More Ethiopian Rabbis deeply alarmed are now speaking out as well,” says Rabbi Tovia Singer, a world renowned author and expert on Christian missionaries. “This crisis has helped Ethiopian Jews to appreciate their own history and sacrifice,” Singer explained. 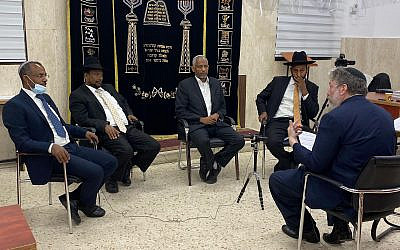 “The Ethiopian Jews face a disturbing crisis,” says Singer. “Typically, missionaries come to Israel to evangelize the general population. In the case of Bishop Plummer, however, a high ranking church leader who recently arrived from the USA, he has declared that he is specifically targeting Ethiopian Jews.”

When asked exactly how this was being accomplished, Singer explained “They are partnering up with local Messianic congregations that are also targeting Ethiopian Jews throughout the country.” Rabbi Tovia Singer is the director of Outreach Judaism.

Beyneynu, a non-profit organization that monitors missionary activity in Israel, expressed great concern that Bishop Plummer has already been making tremendous inroads in the Ethiopian community for several years. The Beyneynu representative confirmed that COGIC established 5 churches in Israel as of 2015, and that they are in the process of confirming the possibility that 15 more COGIC churches have been established under Plummer over the past 5 years – all within the Ethiopian Jewish Communities.

Calvin Yosef Murray, a black American-Israeli and former football star who converted to Judaism said in a recent interview that “Plummer is playing the race card”.

Famed music artist Nissim Black commented on the situation in a lively interview with Singer this week where he spoke out against the racial targeting of the black Jews saying “Color means nothing to God, to Torah, or to Judaism”. Regarding the plight of the Ethiopian Jews, Nissim said “They came here to get away from missionaries, so if you’re really looking to help this community, you’d stay away and maybe help them in their struggle by continuing to live Jewish lives, which is what they came here to do in the first place.”

About the Author
Shannon Nuszen is a former Evangelical missionary, now Orthodox Jew living in Israel. She has been involved in the counter-missionary world for the past fifteen years, with a focus on bringing awareness of the missionary agenda to Jewish leadership, and monitoring missionary groups operating in Israel.
Comments