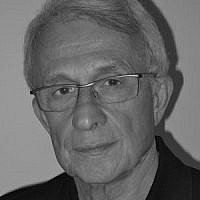 The Blogs
Andrew Griffel
Apply for a Blog
Please note that the posts on The Blogs are contributed by third parties. The opinions, facts and any media content in them are presented solely by the authors, and neither The Times of Israel nor its partners assume any responsibility for them. Please contact us in case of abuse. In case of abuse,
Report this post.

As I was pondering the circus-like elections for the Ashkenazi and Sephardi chief rabbis, scheduled for Wednesday and striped with “no shortage of bribes, bad mouthing and backstabbing” [see Debra Kamin’s article, July 23 TOI] as well a host of candidates who have been accused of all sorts of improprieties, my mind wandered to a meeting I attended more than 50 years ago when the Yeshiva University High School basketball team, of which I was a member, sat down with Rabbi Joseph B. Soloveitchik.

I don’t remember where the meeting exactly took place; most probably we met in one of the classrooms of the Yeshiva but it could well have been downstairs in our gym right before our evening practice.

Rabbi Joseph Soloveitchik, known as HaRav, was an intellectual giant and one of the foremost Orthodox Jewish scholars of the 20th Century. At the time that our team met with him, he was Rosh Yeshiva of Yeshiva University, which included our high school that was located in the same building on 186th Street and Amsterdam Avenue in New York City. Although the high school was officially named Yeshiva University High School [YUHS], most people still used the prior name “Manhattan Talmudic Academy” or “MTA.”

Paul Gallico, author of The Snow Goose and Poseidon Adventure and New York Daily News sports editor in the mid-1930s, wrote at the time that basketball “appeals to the Hebrew with his Oriental background [because] the game places a premium on an alert, scheming mind and flashy trickiness, artful dodging and general smartalecness.” Gallico was undoubtedly influenced by the successes of the City College of New York basketball team during that era. City College was also considered one of the hubs of Jewish intellectuals, especially those who today would be called lefties. I can somewhat attest to Gallico’s observation. Our MTA team was not a tall team, averaging perhaps 5’ 10”, yet we managed to beat some of the top public high schools in the New York whose players were superb athletes and seemed like super giants.

That particular year we were scheduled to play for the Yeshiva High School league championship in the old Madison Square Garden on 50th and 8th Avenue. It was an exciting moment for Yeshiva basketball fans, and certainly for us, because we were the ‘warm up’ game before the major game between the archrivals New York Knicks and Boston Celtics. At the start of our last evening practice a few days before the game, our coach Hy Weinstein called us together to announce the startling school ruling: The YUHS administration, together with our Rabbinic teachers, would require the team to wear yarmulkes on our heads and tstsis under our blue uniforms during the game at the Garden! We were representing Yeshiva University before a crowd of 17,000 people, we were told, and so we had to uphold the proper image of the leading Orthodox institution in America if not the world. We were incredulous; how could we play a basketball game wearing a yarmulke and tsitsis?!

Many of us felt that this requirement was ridiculous and would interfere with the free movement of our play. We were in a rebellious mood and on the brink of not playing, and thereby, forfeiting the championship. In a surprise “power” move, the MTA administration decided to call in their most persuasive “weapon:” HaRav himself! For two hours HaRav met with us, a bunch of high school jocks, and much to everyone’s surprise, conducted a real and open dialogue about the pros and cons of wearing a yarmulke and tstisis in front of such a huge crowd in a well-known, public arena. He did not bully, did not arm twist, did not threaten. And, to our total disbelief, we heard him finally say at the end of the meeting that each one of us was free to decide what to do; it was a matter of individual choice.

We won the game and the championship. I didn’t wear a yarmulke and tstsis. Nor did many of the other team members. There were those who did, and we respected each other’s choice and played a great game highlighted by flawless teamwork. One of the 17,000 spectators was Uncle Jacob, my father’s brother; my family were members of the Bobover Hasidim sect and my father and Uncle were close to the Rebbe. When I met up with my very Orhodox uncle after the game, he congratulated me on our win; not a word about my bare head or one-layered basketball shirt.

I have been thinking a lot about HaRav these past few weeks in the midst of the ugly fighting going on among various rabbis in the orthodox community here in Israel. I went back to reread his short personal essay, translated into English, “The Lonely Man of Faith.” Though I stopped being an observant Jew when I started college many years ago, HaRav’s personal narrative of his struggle as a man of faith touched me deeply. Among other things, I was impressed by his willingness to engage those of different beliefs in open and genuine dialogue. There were many among the Orthodox who criticized his reaching out to others, especially his willingness to speak with rabbis of the Conservative and Reform Movements of Judaism whose deviation from the strict halachic path was, to them, blasphemous. Nevertheless, he believed in a unified community and persisted to talk with everyone.

If a chief rabbi of the state of Israel cannot elevate him/herself to a similarly lofty plane, cannot respect the beliefs of others without feeling threatened – see under: the Western Wall controversy – then my vote is that the citizens of Israel bench them, abolishing the very institution of the chief rabbinate.

About the Author
Andrew Griffel has had extensive experience in the private and non-profit sectors as an international attorney, chief executive officer and strategic policy adviser. He currently divides his time between New York and Israel advising companies regarding business-nonprofit partnerships, organizational restructuring and training board members. He also worked on economic cooperation projects between Jews and Palestinians. Andrew was a Hidden Child during the Holocaust, grew up and was educated in an orthodox Hasidic environment and lived in Israel for many years. He served as a Military Judge in the Israeli Army and was IDF liaison to Egyptian officials during the return of the Sinai Peninsula to Egypt.
Comments