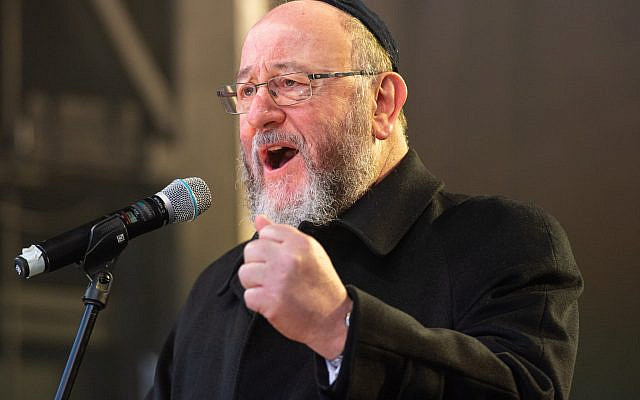 For the last three months I have been learning Mishna on a daily basis. Along with an expanding group of 25 people, I receive a daily five-minute or so ‘Bitesize’ text and broadcast on WhatsApp from Richmond Rabbi Meir Shindler. The postings are a brilliant way to escape the bustle of the day and understand better why 21st century Jews say blessings and recite the Shema in particular ways. It has evoked fascinating debate.

It was part curiosity and part admiration that, when invited to join a United Synagogue dinner event Siyum Hashas at Hampstead Garden Suburb (HGS) shul to mark the end of the seven-and-a-half year Torah learning society, I and a few friends accepted with alacrity. What none of us perhaps realised (how could we?) was that we would be walking into one of those inter-community cauldrons that have a habit of boiling over in British-Jewry.

After a period when the Jewish community has been more or less at one speaking out against antisemitism in the Labour Party, the breakout of antagonism among traditional communities over Chief Rabbi Ephraim Mirvis’s work on the LGBT cause is a sharp remainder of what disputatious people we can be. Actually, when I think back to some of the bitesize Mishna we have been studying, and the robust debate among the rabbis about how things should be done, it might all seem perfectly natural.

But that wasn’t quite the vibe at the HGS event in the presence of the Chief Rabbi Ephraim Mirvis, the emeritus head of the Beth Din Dayan Ehrentreu and current Beth Din chief Dayan Gelley. The events earlier in the week clearly has stung the US rabbinical and lay leadership. Many US rabbis, including my own, had been greatly looking forward to marking the completion of the Day Yomi Talmud study programme event organised by the Stamford Hill based Agudat Yisroel at Wembley Arena.

As Jewish News reported prominently, Mirvis and other US representatives had been offered places on the platform. Shortly before the scheduled celebration it was made known to Mirvis that he was not welcome. A minority of those present resented Mirvis’s heroic stand on LBGT education and its inclusion in the school curriculum.

This act of cultural vandalism from the right was particularly disturbing at a time when Mirvis’s nationwide has never been greater. In the general election campaign, when British-Jewish anxiety was its height, Mirvis’s eloquent intervention in The Times was a defining moment. His charge that Labour’s antisemitism was a challenge to the ‘soul of the nation’ stirred Jews and non-Jews alike.

The depth of the hurt as a result of Agudath’s affront to Mirvis was evident throughout the proceedings at HGS. As Gelley signalled the start of the next Torah cycle he and others referred to how it had been a difficult week for Mirvis. Ehrentreu, not known in the past for his moderation, was solid in support.

When Mirvis finally came to give his address there was a standing ovation which went on for more than a minute. It was defiant rejection of the critics and recognition of the high esteem in which Mirvis is held for his intellect and prudent use of what Americans call the ‘bully pulpit’ when it comes to politics. The applause and approbation was a direct riposte to the sages of the Wembley Arena.

What is truly upsetting about these events is that something as exciting and significant as celebrations of Torah learning should have become politicalised. It is a sharp remainder that there are deep seated problems in the community. The fastest growing section of British-Jewry are the Agudath and the Charedi Jews.

More than any other groups the ultra-orthodox wants to see their values defended against enemies demanding, for instance, changes in Kashrut, Brit Milah and other Jewish practice. It is happy to let the broader community campaign on their behalf of these issues and on housing and support for state funding for religious education.

Too often the Mirvis critics are takers and not givers when it comes to broader community interests. Disrespecting the Chief Rabbi will not improve the chances of getting a hearing for causes dear to their hearts.