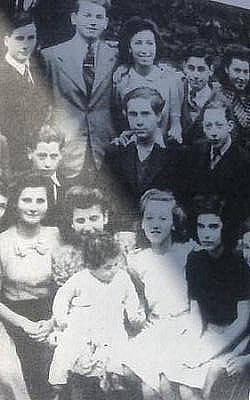 Photograph of Sunshine Hostel, 1943. Dorothea is baby on lap of girl in front row. (courtesy)

To mark the anniversary of the Kindertransport project, in which Britain agreed to accept ten thousand unaccompanied refugee children, the vast majority of whom were Jewish, from Germany, Austria and Czechoslovakia in 1938 and 1939, the AJR (Association of Jewish Refugees) held a special zoom meeting. This was hosted by British celebrity Dame Esther Rantzen and one of the main speakers was Sir David Attenborough, whose family had hosted two girls from Germany.

Over seven hundred people participated in the zoom meeting, though on my screen I saw only twenty-five. The focus of the event was the role played by host families who took in children they had never met and gave them a home in the UK. Sir David Attenborough spoke affectionately about the two girls, Irena and Helga, who were taken in by his parents, and the way he and his two brothers suddenly acquired two teenage sisters. Neither of the girls could speak English and the Attenboroughs did not speak German, but they all seem to have quickly overcome the language barrier. The families have remained in touch to this day.

A particularly touching moment was when Sir David recollected the moment when his mother turned to the girls and said ‘Now we are one family’ after Chamberlain had announced over the radio that England was now at war with Germany).

Another speaker was taken in by the family of former British Prime Minister, Clement Attlee, and spoke affectionately about them, too, though he was less enamoured of their habit of taking cold baths.

There are myriad stories of sad partings from parents, the experience of travelling alone on a train across Europe, the voyage by sea to England and then another train journey ending at Liverpool Street station in London. Today a beautifully-crafted statue, depicting children standing in a small, desolate group, stands just outside the station to commemorate the rescue, Each child had a label with his or her name, and the host families, who had also posted a guarantee of fifty pounds for each child, were at the station to collect ‘their’ child.

In some cases there was no one to collect a child, and it was incumbent on the various welfare organisations to arrange for their placement. The whole project was organized by Jewish and Quaker welfare organisations, with the cooperation of the British government. This display of British kindness, decency and generosity of spirit should never be forgotten.

My parents, who were refugees themselves, just slightly older than the children who came in the Kindertransport framework, were appointed house-parents at a hostel for these children in London, and remained in touch with many of them throughout their lives. The photo at the top of this post shows the children who were accommodated at the Sunshine Hostel which was run by my parents. I am the baby on the lap of one of the girls in the first row.