Last week China welcomed the visit of Israeli Prime Minister Benjamin Netanyahu on the heels of Saudi King Salman’s visit. Both visits highlight closer economic cooperation, but Beijing also weighed in on the Arab-Israeli conflict. Chinese Foreign Ministry spokeswoman Hua Chunying said Beijing hopes Riyadh and Jerusalem would “each make their contributions to the realization of enduring peace and development in the Middle East.”

Increasingly, Beijing has been signaling its aspiration to play a larger role in the Mideast not only economically but also politically. Already China is becoming a large stakeholder in regional security by virtue of its economic and infrastructure investments, and increasing number of workers overseas.

In Israel, where both countries just celebrated 25 years of diplomatic ties and bilateral trade is at $8 billion, Chinese firms are the major drivers in infrastructure projects such as Tel Aviv’s metro system, Haifa and Ashdod ports, with 3,500 workers currently in the country and another 20,000 on the way. As a corollary, Beijing would need to reinforce its regional politico-security posture as well to help maintain stability and protect their citizens and assets.

Haifa is the site of a growing number of Chinese-owned ports around the Mediterranean including Algeria’s Port Cherchell, Egypt’s Port Said and Port Alexandria, Turkey’s Kumport, and Italy’s Port Genoa and Port Naples.  As such this provides an opportunity for China and regional countries to jointly promote economic integration via the One Belt, One Road (OBOR) initiatives, especially in the Eastern Mediterranean and Middle East.

For example, with growing Chinese investments in both Turkey and Israel, this may be utilized for broader cooperation at the regional level. One such project is the Jezreel Valley Railway line. Revived after 65 years in August 2016, cargo traveling by sea from Turkey to Haifa Port can be placed on the Jezreel line, and transported to Jordan and the broader Arab Gulf region. The Jezreel Valley train, part of the Turkish Hejaz Railway built under the Ottoman Empire in 1905, ran until 1951. With China winning a tender to operate Haifa Port for 25 years, this would facilitate China to ship goods from Turkey to Jordan and unto Asia via the Red Sea or the Arab Gulf region, and vice versa. 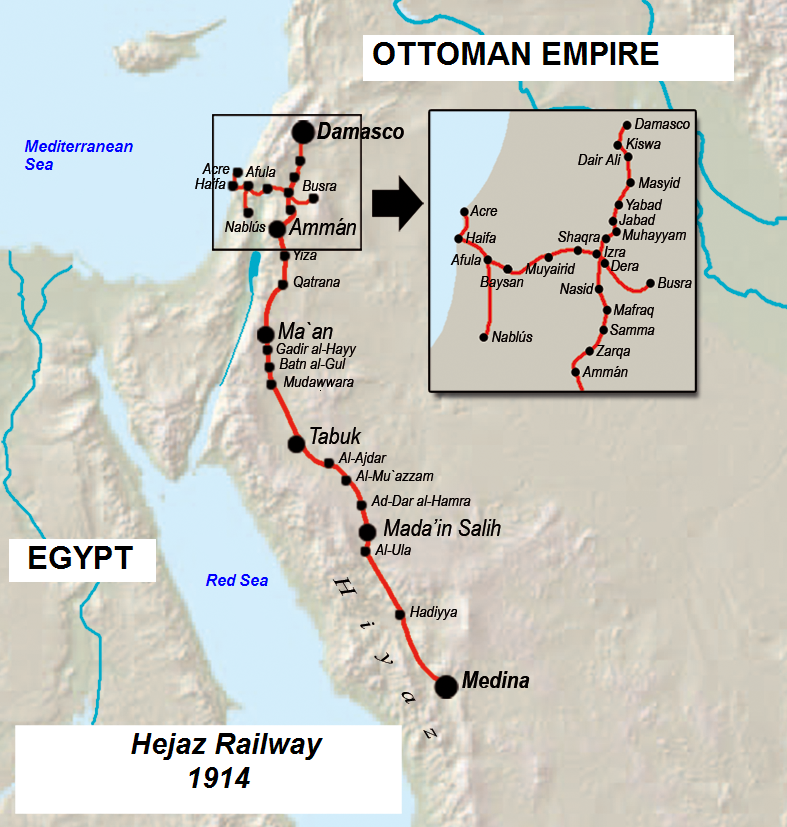 The Hejaz Railway in the Ottoman Empire 1914. Source: Wikimedia Commons

Indeed, it is within the context of the OBOR and goal of broader regional cooperation that Israeli transport minister, Capt. Yigal Maor, proposed the Israel-Gulf Economic Corridor (IGEC) in September 2016.

He believes that if China can invest in this IGEC that encompasses linking infrastructure projects in the Arab Gulf region with Israel and Jordan to transship Chinese goods, this could push Gulf countries into more formal ties with Israel.

In turn this could jumpstart the Arab Peace Initiative that aligns with European Union and US goals in the Middle East peace process, with the added benefit of promoting broader regional cooperation with Turkey and EU in the Eastern Mediterranean.  The recent Israeli-Turkish reconciliation, launched after six years of broken relationship following the 2010 Mavi Marmara incident, could also help in this regard.

Beijing and Ankara also appear to compartmentalize the Uyghur issue and marching forward on economic cooperation via the new Silk Road.

In addition to China acquiring a 65% stake of Kumport container terminal in Turkey’s third largest port Ambarli in Istanbul, China’s Asian Infrastructure and Investment Bank (AIIB) is financing the Trans-Anatolian Natural Gas Pipeline Project (TANAP) that pipes Azeri gas through Georgia and Turkey unto Europe. In November 2015, Ankara and Beijing signed a memorandum of understanding (MOU) on harmonizing China’s “Belt and Road” initiative with Turkey’s “Middle Corridor”, based on a high-speed rail linking Kars in Turkey’s east with the country’s western city of Edirne, and eventually connecting Turkey with China via Central Asia and the Caucasus.

Complementing this is the China-Turkey intermodal corridor, inaugurated in December 2015 by DHL Global Forwarding, a leading provider of air, sea and road freight services in Europe and Asia. The rail corridor is expected to generate US$2.5 trillion in annual trade within the next ten years, and was expanded to connect Taiwan with Europe via China, thereby linking the Pacific Ocean with the Atlantic Ocean with Turkey as a key trading hub.

As China becomes an increasing stakeholder in the Mideast and Mediterranean, Turkey, Israel, and other regional countries can leverage Beijing’s vested economic interests to help promote regional stability, and perhaps have positive spill over to the political realm with conflict resolution in Syria.  Already Gulf states such as the United Arab Emirates are also eyeing China’s rising role in the region, convening a recent conference in March to explore what constructive role Beijing may play in the Middle East peace process, the Iran issue and the Syrian crisis.

As a recent Pentagon-commissioned RAND report assessed, with so many shared interests in Mideast stability, Washington and Beijing also should have no problem to cooperate in the region. Given Sino-US relation is the most important bilateral relation and a key pillar of any future international system, indeed this may be a good place to start.