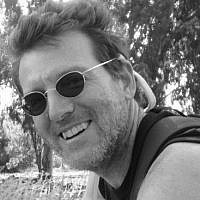 The Blogs
Jonathan Lowenstein
Cyclist and historian
Apply for a Blog
Advertisement
Please note that the posts on The Blogs are contributed by third parties. The opinions, facts and any media content in them are presented solely by the authors, and neither The Times of Israel nor its partners assume any responsibility for them. Please contact us in case of abuse. In case of abuse,
Report this post.

I have now joined the ranks of fathers with two child seats on their bicycle.  Its quite a leap. I’ve been using child seats now for almost twenty years so I thought I should share my wisdom.

Don’t expect to carry kids long distances because whe they fall asleep its very hard if not impossible to transport them. You need to learn what your range is with a child before you attempt to circle the Kinneret.

There are two main models for carrying kids: a. Having them on the cross-bar (or the handle bars) b. On the rack behind you.

What you need to know:

Aluminum bicycles are said to have weaker cross bars and as a result are unsuitable for carrying kids.  This has been addressed by a company called WeeRide whose seat comes with its own attachable crossbar. The seat is removable but you have to keep the crossbar on the bike.

The crossbar is the most fun for a child! They can see where you are going, hold the handlebars and talk to you.

The cross bar has the least impact on your balance: the child is sitting close to the center of gravity.

You may need to pedal with your legs sticking out a bit because it interferes with your knees. Its not a big problem but requires a little adjustment.

You may need to pad the handlebars so the child can lean on them.

There is an urban legend about a child who sat on the cross bar and got his feet stuck in the wheel.  I follow these things and no such incident has taken place in the last two decades. In my opinion the front is safer because you can see your child and control what they are doing.

If you have a strong rack then you can get a seat which is removable, so the seat doesn’t cramp your style.  Fixed seats are very large though they can be used to carry stuff when the kids aren’t in it.

If you wear a backpack it may be in your childs face. Either way they only have a few inches of space and can’t see much.

If the child falls alseep, you can’t see it and when you move, they role in the opposite direction upsettig your balance.  Because its boring to sit at the back you run greater risk of a sleeping child and their head is unsupported.

There is a third option, which is to use a massive carrier you hook to your bicycle. Be warned, they are very heavy and difficult to use on hills. The kids sit very far away from you and you can’t communicate with them, if they are by themselves they may hate it.  It may be dangerous on public roads because of the distance between you and the child.

They do look cool though.

About the Author
Jonathan Lowenstein is an Anglo-Israeli who has lived half his life in England and half in Israel, but has never spent more than a decade continuously in either country. In the 1990's, he helped found the Tel Aviv Bicycle Association, Israel's most successful bicycle advocacy organization, now known as the Israel Bicycle Association. Since 2007 he has edited the History of Israel in Wikipedia. Jonathan has an MA in Political Science from Tel Aviv University and an MA in History from the University of London.
Comments