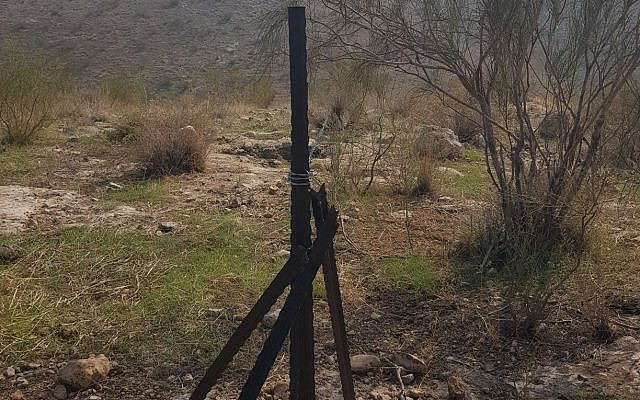 “It is explicitly written that in the Torah that we bought the Cave of Makhpelah from non-Jews.  Is it justified that  non-Jews took it over from us?,” asked the polite young man who called me on Thuraday, He first introduced himself as a representative of “Adama Shelanu” (The land is ours.).  The purchase of the Cave of Makhpelah in this week’s Torah portion is seen by many as a symbolic purchase of the entire Land of Israel, in addition to the fact that God promised us The Land.

While I can’t say that the idea doesn’t appear anywhere in classic sources, I have not been able to find is. Rashi and many of the other classic commentators focus on the fact that when Avraham approaches the Hittites to ask for the cave, he says he is both a ger (foreigner) and a toshav (resident). A ger would not be entitled to a family burial plot. The purchase is not of the entire Land of Israel, but it does symbolize that this is Abraham’s home.

The young man and I had two long conversations on Thursday, and will talk further. A healthy society requires that we respectfully speak with those whose ideas are abhorrent to us, and infuriate us. We must try to change their opinions, even as we do whatever we can do without going over to the sitra akhra (other side) ourselves, to prevent them from carrying out evil.

It wasn’t easy. This young man said that anything, including murder, is permissible to expel non-Jews from our land. All of history is one of hateful non-Jews oppressing us, and stealing our land. He prefers the infamous  and dangerous “Torat HaMelek” to Rabbi Abraham Isaac Kook, Rabbi Uziel, Rabbi Akiva, Rashi, Rabbi Shimshon Rafael Hirsch, HaMeiri, or any of the other sources I cited regarding the rights of non-Jews in the land of Israel.

I am again writing too close to Shabbat because I was suddenly called this morning to run to the Taibe Junction, where Israelis had just stolen 20 goats from a Palestinian shepherd.  On Thursday I was a dying cow intentionally run over by a settler, new fences apparently set up by a settler illegally living inside the Umm Zuka nature preserve. Authorities confiscated two nursing cows belonging to Palestinians from the same area because it is a nature preserve, even as the settler’s cows range freely in the same area.  On Thursday soldiers also pushed a 75-year-old farmer to the ground, as they expelled him from his olive trees on land that Israel recognizes as his, and requires no permit to access.  Additionally, week soldiers went from Bedouin encampment to Bedouin encampment in the northern Jordan Valley, threatening them that they will be punished, if they are in contact with us. 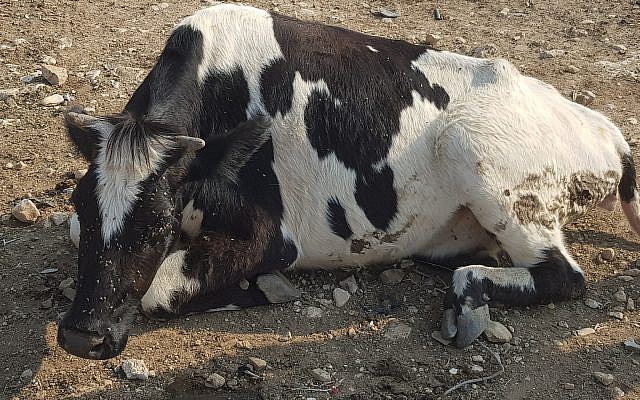 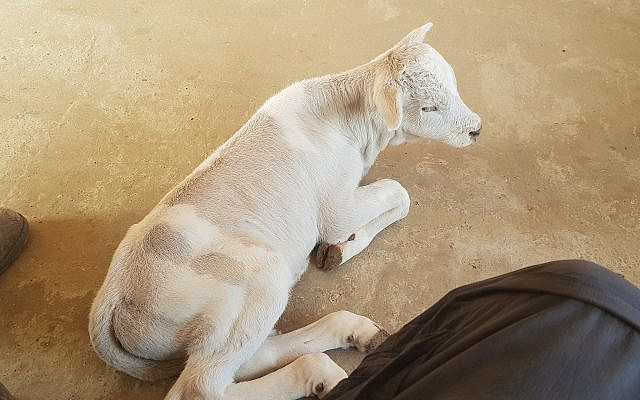 One of the nursing calves whose mother was confiscated.

All these, and more events from this week alone point to the collusion going on between settlers, their supporters, and the Israeli government, to accomplish the goal of my young interlocutor to expel Palestinians. They may not all be willing to go as far as he is, but the goal is the same. If harassment causes them to leave “of their own will,” or at least concentrate themselves in urban areas in Area A and Area B, so much the better.

I don’t know how many times this week I was asked, “Why are they doing this to us?” I could only answer truthfully. “They want you to leave.”

Of course, there are additional lessons to be learned from our Torah portion. Abraham treats those he is purchasing the cave from with respect. He doesn’t rely on God’s Promise to say, “It’s mine. Give it to me.” (Although Rashi says he would have, had they not agreed to sell it to him.).

It is also Isaac and Ishmael who come together who bury Abraham himself in this same cave.  At this critical moment, they are brothers.  I am sure that was a great comfort to Abraham. Ishmael will not be buried with his father, but neither is he to be excluded. The Abraham who felt so badly about expelling Ishmael earlier, and whom the midrash tells us continued to care for his son, and who says to Lot that they are family and there is room for all in the Land, would not want the descendants of Ishmael excluded from the cave, or the Land of Israel today. Neither would he have approved of Muslims forbidding access to Jews, as also happened when it was Muslim control.

Rebecca immediately agrees to give water to Abraham’s servant who has arrived from Canaan to look for a wife for Isaac. Of her own volition, she offers to water his ten camels to this complete stranger.

While some learn from this week’s portion that “It is all ours, and non-Jews must leave,” we could choose to learn lessons about peaceful and respectful coexistence. Abraham, Isaac and Ishmael, and Rebecca, all teach us that it is not simple, but it is possible.