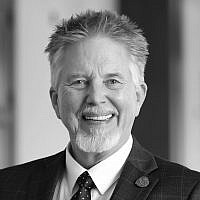 Last month, a handful of disgruntled and misguided Christian leaders once again packed up their Bibles and headed home from the most recent Israel-bashing “Christ at the Checkpoint” conference. This annual affair is where the small but loud group of anti-Israel Christians – frustrated by their coreligionists’ outpouring of Biblically and morally mandated Zionism – gather to traffic in Replacement Theology and demonize the Jewish state.

As the group returned to their medieval pulpits and dwindling congregations, across the US millions of Bible-believing Christians were praying for, advocating on behalf of, and celebrating the Jewish state.

For example, just last week thousands of Christian Zionists gathered to speak with one voice in support of Israel at the annual Columbus, GA Night to Honor Israel. Presented by the more than 2.9 million member Christians United for Israel (CUFI), the gathering is one of hundreds of pro-Israel events taking place this year as another spiritual great awakening sweeps across our nation.

The Christian Zionist move of God continues to expand throughout Bible-believing communities, attracting adherents from all backgrounds regardless of church affiliation. 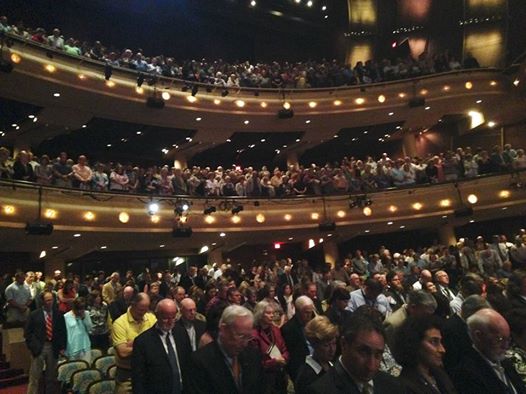 It is this crumbling of denominational walls that warrants deeper consideration. And CUFI’s Night to Honor Israel in Columbus exemplifies the trend. The event was hosted by Senior Pastor Jay Bailey of the Assembly of God, Solid Rock Church and featured Dr. David Jeremiah, founder of Turning Point Ministries and Senior Pastor of the Shadow Mountain Community Church along with music by Dr. Charles Stanley’s world-renowned First Baptist Atlanta Choir and Orchestra. In the audience were more than 2,200 individuals representing a host of churches and denominations.

Joan Bolden, a member of the Presbyterian Church (USA) who had traveled all the way from Philadelphia to participate in the evening’s activities, explained the simple, Biblical reason she and so many others are choosing to stand with Israel, “When I heard about it, I just had to come. I love the Bible, I love the Lord, and I love the Jewish people who gave them to me.”

Dr. Jeremiah’s message to the audience was equally direct, “We do not have to argue over whose land this is. First of all, it belonged to God, it’s God’s land and God decided to give it to Israel so let’s not argue with Him.”

While some do persist in arguing with Him, Christian Zionism continues to roll through mega-churches and small houses of worship across the United States.

During his remarks, Bailey summed up the phenomenon this way, “This truly is a movement of God that’s gone viral across America. CUFI is a powerful entity that is really helping to inspire Christians to stand with Israel, the only democratic, freely elected sovereign state in the Middle East and one of the greatest allies of the United States.”

The outpouring of love and support for Israel at events such as the Night to Honor Israel in Columbus has had a significant impact on Jewish-Christian relations. As Rabbi Shalom Lewis of Atlanta’s Congregation Etz Chaim noted, “For the first time in my life, I am able to claim that ‘some of my best friends are Christians’ with pride and honesty. After years of Jewish fear in the shadow of the cross, I am witness today to Christians who not only talk the talk but walk the walk. I love them. I trust them and with a full heart call them my brothers and my sisters.”

The evening of celebration and solidarity was concluded with the prayer of Rev. Robert Beckum of St. Luke’s United Methodist Church. As he brought our united petition for the peace of Jerusalem before the God of Abraham, Isaac, and Jacob – all in the room, Gentile and Jew, from Baptist to Presbyterian shouted in unison, a very hopeful, “Amen!”

Some have called the recent sea-change in Jewish-Christian relations a miracle; others view it as the predictable result of Christians who obey the Word of God by standing with Israel. But either way, what was unforeseen, and is a miracle unto itself, is how support for the Jewish state is bringing unity among Bible-believing Christians.

Pastor Victor Styrsky is CUFI Eastern Regional Coordinator for Christians United for Israel and the author of, “Honest to God – The 10 Questions Jews Ask Christian Zionists”

About the Author
Victor Styrsky has been a pastor, author, music director, and pro-Israel activist beginning in 1981 when protesting President Ronald Regan's proposed sale of AWACS to Saudi Arabia. He is the author of, "Honest to God - The 10 Questions Jews Ask Christian Zionists" DEVORA Publishing, Israel & Amazon Books and "Jews, Gentiles, and the Mystery of Salvation" Amazon Books.
Comments