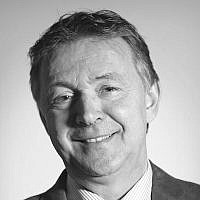 The Blogs
Cornelis Kant
Apply for a Blog
Please note that the posts on The Blogs are contributed by third parties. The opinions, facts and any media content in them are presented solely by the authors, and neither The Times of Israel nor its partners assume any responsibility for them. Please contact us in case of abuse. In case of abuse,
Report this post.

A few weeks ago the World Council of Churches in Geneva (WCC) sent a letter to the EU Ministers of Foreign Affairs. In this letter they appeal for a firm and principled stance by the European Union against any annexation by the State of Israel. The WCC also appeals for suspension of the trade association agreement between the EU and Israel. So the WCC is asking for condemnation of Israel and economic sanctions.

As Christians for Israel we are shocked and startled by this attitude of the Churches. The WCC has built a long-standing reputation for one-sided condemnations of Israel. We wrote a letter to the WCC urging them to refrain from putting pressure on the EU Ministers. We recognize that there are very different views on this issue both within Israel and within the churches. When Israel is threatened, attacked and confronted with hate, the Churches remain silent, but when Israel takes a step the Churches immediately start appealing on condemnation of Israel and economic sanctions. This is an unacceptable one-sided indignation.

We believe it is important that the Jewish people are not confronted with a Christian church that is condemning them, but with a church that shows solidarity and love with them. In view of the past, it is appropriate for the Church to take a modest and humble attitude towards Israel. Even if opinions on certain issues differ. May the Lord protect Israel and give the Christian Churches worldwide wisdom by His Holy Spirit.