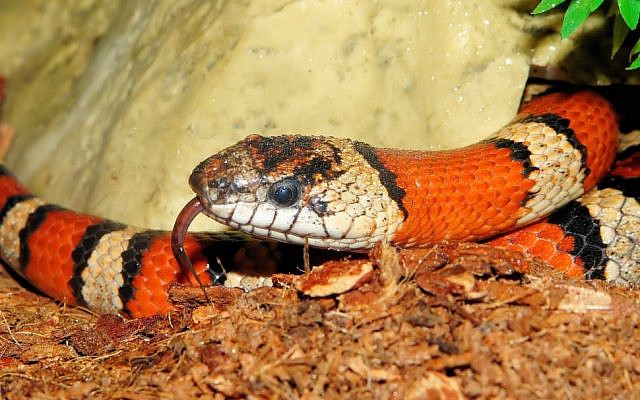 Besides the more famous word nachash, Avot d’Rabbi Natan teaches that there are seven different words in the Bible for snakes: saraph, tanin, tzefa/tzifoni, efeh, achshuv, peten and shephiphon. Avot d’Rabbi Natan itself offers explanations of these various terms, but unfortunately scribal errors and the like have crept into our editions of Avot d’Rabbi Natan, rendering its elaborate treatment of these synonyms unintelligible. Therefore, in the coming articles we will explore the differences between these seemingly synonymous words, basing ourselves on other sources and commentators.

Rabbi Shlomo Aharon Wertheimer (1866-1935) explains that nachash is an umbrella term which includes many different types of snakes. Alternatively he proposes that the word nachash is related to the word lachash (literally, “whisper”, but colloquially “an incantation”), and refers specifically to snakes whose dangers can be averted by charming them into submission. Indeed, Rashi (to Jeremiah 8:17) explains that a nachash after seventy years turns into a tzefa and can no longer be charmed, implying that the word nachash only applies to a snake which can be charmed. Similarly, Rabbi Aharon Marcus (1843-1916) argues that nachash is derived from the root letters CHET-SHIN, which refer to moving slowly (like the word rochesh that means “creeping/crawling”) and clandestinely (like the word lachash).

What is a saraph? Rabbi Shlomo Ibn Parchon (a grammarian from the 12th century) explains that saraph is a poisonous snake because its venom “burns” (soref) like fire. Similarly, Rabbi Yonah ibn Janach (990-1050) explains that the fire-like breath of a saraph can burn whatever it comes in contact with (according to this, a saraph is somewhat akin to a mythical dragon). However, Rashi (to Isaiah 30:6) explicitly writes that a “flying saraph” does not actually have wings, but is a fire-breathing snake which can jump long distances. Rabbi Yosef Bechor Shor (a 12th century French commentator) explains that a saraph is a type of snake whose bite burns a person as if he fell into a large furnace, immediately morphing him into a pile of ashes. He explains that this was the type of snake that G-d sent to punish the Jews for complaining about the manna (Numbers 21:5-9). Interestingly, Mitchell First points out that the English word serpent bears a close resemblance to the Hebrew word saraph.

The Vilna Gaon writes that nachash is to land as tanin is to sea. This analogy suggests that the word nachash refers to a land snake, while tanin refers to a sea snake (possibly an eel or something similar). On the other hand, Rashi (to Genesis 1:21 and Niddah 22b) simply writes that a tanin is simply a big fish. Contrary to popular belief, the word akalaton does not actually mean snake, but means “coiled”, and serves as a description of a type of sea serpent. The prophet Isaiah (27:1) refers to the “coiled snake” (nachash akalaton) and the “straight snake” (nachash bariach), which the Talmud (Bava Batra 74b) interprets as referring to the female and male Leviathans respectively.

The Malbim explains that tzefa is an especially poisonous snake because even its excrement is venmous (in Modern Hebrew it means “viper”). Rashi (to Isaiah 59:5) explains that tzfoni is an “evil snake”, while efeh is a “completely evil snake”, which can portend only bad. As mentioned earlier, Rashi understands that a tzefa is the type of snake which can no longer be charmed. Nonetheless, Radak (there) says that tzfoni and efeh are two words for the same thing.

When talking about the efeh (Isaiah 30:6; 59:5; Job 20:16), Rashi and Mahari Kara explain that there are only two of them in the world — a male and a female — and that they reproduce only once every seventy years. Ibn Parchon explains that efeh is the female saraph-nachash, which is shorter and thicker than its male counterpart, but its venom is more potent. Interestingly, Rabbi Shalom Buzaglo (1700-1780), a Moroccan Kabbalist, writes in Hadrat Melech (a commentary to the Zohar) that efeh is the male snake, while nachash is the female snake. Nonetheless, an earlier Polish Kabbalist named Rabbi Natan Nata Shapiro (1585-1633) writes in his work Megaleh Amukot that the two words for snake represent the male and female forces of evil, with efeh representing the female force of evil and nachash representing the male force of evil (in consonance with Ibn Parchon’s understanding).

The Midrash says that an efeh is a snake called an eches (it is unclear in which language), which was believed to have the ability to kill a flying bird by just looking at its shadow. In Modern Hebrew eches is an adder or rattlesnake. Rabbi Shlomo Pappenheim of Breslau (1740-1814) explains that the letters PEH-AYIN, which make up part of the root of the word efeh, always denotes consistency (in movement or sound). In the case of the efeh-snake, that consistency is expressed in the rattling sound emitted by the rattlesnake. Rabbi Avigdor the Frenchman (a 14th century commentator) writes that this is the type of snake which G-d sent to punish the Jews in the wilderness.

The word achshuv is a hapax legomenon in the Bible because that venomous creature only appears once, in Psalms 140:4. Some commentators explain that it is the type of snake who spits out its poison, while others explain that that achshuv is not a snake at all but some other poisonous creature (e.g., a spider, which is an achavish in Hebrew).

Rabbi Shlomo Aharon Wertheimer (1866-1935) clarifies the exact meaning of the word peten by comparing it to nachash. He argues that while the word nachash implies a snake which can be charmed, peten, on the other hand, is a snake who is immune to the effects of snake-charming and continues to remain dangerous (see Psalms 58:6).

Moreover, Rabbi Wertheimer offers two ways of understanding the etymology of the word peten: it may be related to the Hebrew word miftan (“threshold”), which alludes to the fact that a peten-snake is always dangerous and cannot be charmed. Just as anyone who enters a house surely treads upon its threshold, so does anyone who encounters a peten surely enter a situation of danger. Alternatively, the word peten is related to the Hebrew word pituy (“coaxing”) and alludes to the snake’s role in cajoling Eve to eat from the Tree of Knowledge (Genesis 6:1-6). Needless to say, the English word python is likely derived from the Hebrew word peten.

The last word for snake, shephiphon, appears once in the Bible (Genesis 49:17) and is described by the Jerusalem Talmud (Terumot 8:3) as resembling a single hair. Rabbi Yaakov Tzvi Mecklenburg (1785-1865) writes that the root of the word shephiphon is the bilateral root SHIN-PEH, which is associated with closeness and attachment between entities (for example, the word shifshuf refers to “rubbing”). In the case of the snake it ambulates by wiggling and crawling on the ground, with its body always touching the floor. Rabbi Aharon Marcus (1843-1916) argues that the Hebrew word shephiphon is related to the Akkadian word shepu which means “foot” and is representative of the Hebrew language phenomenon in which words can have polar-opposite meanings. So although in Akkadian — the lingua franca of the ancient word — shepu meant “foot”, in Hebrew, it actually refers to the footless serpent.

Rabbi Yechiel Heilpern (1660-1742) cites the work Sefer HaChochmah, ascribed to the late 12th century Asheknazic scholar Rabbi Elazar Rokeach of Worms, which presents the differences between all the different words for snake. Parts of this explanation are cited in the commentary to the Torah also ascribed to Rabbi Elazar Rokeach. He writes that a nachash is specifically a yellowish-greenish snake whose color resembles saffron and whose bite is fatal. A nachash is a long snake, while, by contrast,a shephiphon is a small snake. (Rabbi Yaakov Yisroel Stahl points out that Rokeach’s commentary apparently contradicts itself because it also says that shephiphon is a large snake, while nachash is a smaller snake.) Interestingly, Rabbi Wertheimer adds that the letter NUN at the end of the word shephiphon implies that the creature in question must be something small. Nonetheless, appending a VAV-NUN to words does not always serve as a diminutive. The word peten focuses on the advanced age of a snake, while efeh refers to an extremely old snake that is also large. Tzefa is a flying saraph and has multiple tails. Rabbi Wertheimer also cites this explanation and argues that it is based on the otherwise undecipherable passage in Avot d’Rabbi Natan mentioned in Part 1.