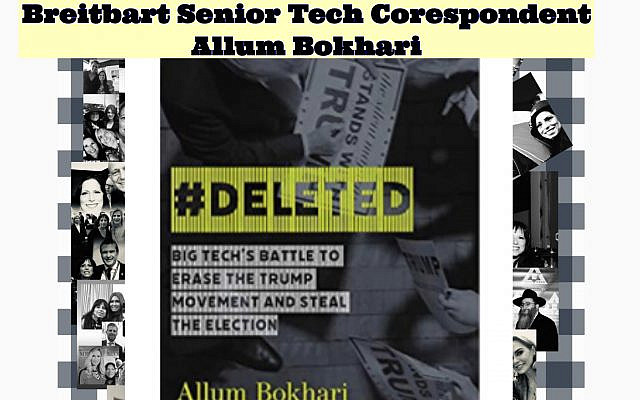 The most powerful tech companies in the world are determined to stop Donald Trump. Their latest attempt to block the public from a cover story from The New York Post can and must not be ignored by Democrats.

I recently had the opportunity to interview Allum Bokhari, senior technology correspondent for Breitbart News. He reports on political bias, censorship, and abuses of power in Silicon Valley. He is the author of #DELETED: Big Tech’s Battle to Erase the Trump Movement and Steal the Election.

Bokhari has spent four years investigating the tech giants that dominate the Internet: Google, Facebook, YouTube, Twitter. He has discovered a dark plot to seize control of the flow of information, and utilize that power to its full extent – to censor, manipulate, and ultimately sway the outcome of democratic elections. His network of whistleblowers inside Google, Facebook and other companies explain how the tech giants now see themselves as “good censors,” benevolent commissars controlling the information we receive to “protect” us from “dangerous” speech.

Bokhari reveals a sinister, anti-democratic plot against the President.

Most conservatives are already aware that tech companies ban and censor them. But Big Tech’s methods go beyond that — their tools to manipulate opinion are often hidden from view, influencing the voting public without their knowledge.

One Google insider has said this book will “shake the foundations of Silicon Valley.”

These whistleblowers, who were carefully protected, reveal secret methods to covertly manipulate online information without us ever being aware of it, explaining how tech companies can use big data to target undecided voters. They lift the lid on a plot four years in the making – a plot to use the power of technology to stop Donald Trump’s re-election.

C: What made you decide to write the book?
AB: This was such an important topic and I accumulated so much information through my work that needed to be shared. I needed to get into details on such an important subject that has so much power over all of us around the world.

C: Tell is how powerful it is?
AB: In the business world for example, small and large companies depend on social media, whether on Facebook or especially Instagram. If a landlord wants to “evict” you, they have to go through a legal process. If Twitter, or Facebook was to restrict or suspend or account, there is no recourse and your chances to rebuild are slim if these outlets were a big part of the sales, promotion and profit.

C: Let’s discuss some other platforms. What are your thoughts about Parler and Signal?
AB: Steve Parler is a good guy, but there are no guarantees on any platform now.

C: Gab?
AB: Gab does what Twitter started as, a place to discuss anything based a on person’s first amendment rights, whether or not you disagree or find someone’s post offensive.

C: The very first words of the book and the first chapter deal with the election of Donald Trump of 2016 and how Silicon Valley found it “offensive.” You go into details breaking up the control by human and robotic censorship, defamation and how tied Silicon Valley is to Washington
AB: I have it on very good sources how well poised the tech outlets are for the election of 2020 to silence and misrepresent Donald Trump and his followers. We are witnessing their success everyday.

I found this review factual and had to share:

I cannot overstate the importance of this topic. Cancel culture and censorship is a very dangerous ideology that is being used to manipulate you. It disturbs me that people so readily embrace it. In fact, if I bring up a topic that is critical of the left, I get bombarded with people explaining to me how my news is fake and theirs isn’t. It’s reached absurd proportions now. It’s even driving crime and other serious political consequences. Google, Facebook, and Twitter need to get out of politics. We need legislation to fix that. Corporations do no answer to the people. That is pretty obvious. Even more obvious after reading this book.

Well written. I recommend it. Everyone should read this. Especially if you are one of those telling everyone their news is fake when in fact, it’

Allum Bokhari is an investigative tech reporter at Breitbart News. In 2018, he stunned the media when he obtained and published “The Google Tape,” a 1-hour recording of Google’s top executives reacting to the 2016 Trump election and declaring their intention to make the populist movement a “blip” in history. He also obtained “The Good Censor,” an internal Google document admitting to censorship, Facebook’s list of so-called “hate agents,” and YouTube’s search blacklists. Bokhari’s work has received praise from Donald Trump Jr., Fox News host Tucker Carlson, and Canadian media entrepreneur Ezra Levant. He lives in Washington, DC.